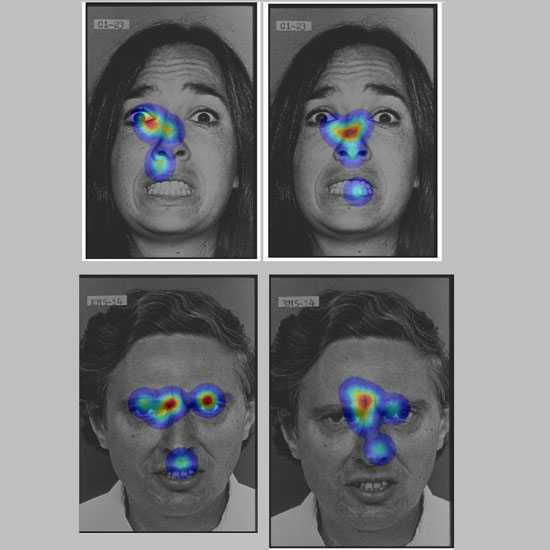 Bridge to nowhere:&nbsp; People who lack a corpus callosum (right) have trouble identifying fearful (top) and angry (bottom) faces compared with controls (left). The colors indicate amount of time spent looking at the region, with red being the longest, yellow being medium, and blue the least amount of time.

People born without the large bundle of nerve fibers that bridges the brain’s hemispheres have trouble identifying fearful faces, and don’t look preferentially at others’ eyes to perform this task, according to research presented Sunday at the Society for Neuroscience meeting in Chicago.

Because similar face-processing patterns are seen in people with autism, the new work bolsters the evolving, 20-year-old theory that autism stems from impaired long-range connections in the brain, says lead investigator Lynn Paul.

The corpus callosum is the largest and fastest conduit in the brain, containing an estimated 250 million axons that connect the language and symbolic reasoning of the left side of the brain with the spatial manipulation, and audio-visual processing generally controlled by the right.

Paul studies agenesis of the corpus callosum (AgCC), a congenital disorder in which this important structure does not develop. About 1 in every 3,000 people are born this way, and many of them have average intelligence, walk and talk normally, and have families.

What these people usually can’t do well is rapidly integrate information between the two sides of the brain, which is particularly important in self-awareness, making social judgments, and carrying out live social interactions. These deficits become most apparent around age 8 or 9, when social interactions become much more complicated.

In a conversation, “there’s a lot of complex information that’s emotional and linguistic and [involves] memory, it all has to come together very quickly to generate a response,” says Paul, senior research fellow at the California Institute of Technology. “When you’re missing that huge structure, it can’t process things that quickly, and you start losing information.”

Attesting to these social difficulties, 20 to 30 percent of those with the disorder would meet criteria for autism, and an estimated 3 to 5 percent of people with autism have AgCC, according to Paul.

Paul tracked the eye movements of nine adults with AgCC and nine healthy controls while they looked for one second at photographs of black-and-white faces expressing various emotions. The AgCC participants can distinguish upright and inverted faces, and identify the faces’ genders, just as well as healthy controls can.

“They’re registering and making sense of the faces. It was when we had them name the emotion on the face that the eye movements became unusual,” says Paul.

Unlike controls, who look immediately to the eyes to determine the emotion, people with AgCC gaze around the center of the face. They are also significantly worse at correctly identifying angry and fearful faces than are the controls.

People with autism, too, have trouble identifying fearful faces. And when they look at pictures of faces, they tend to home in on the mouth region instead of the eyes.

Paul’s team is working on direct comparisons between people with AgCC and those with high-functioning autism, to find similarities and differences when tested on these tasks.