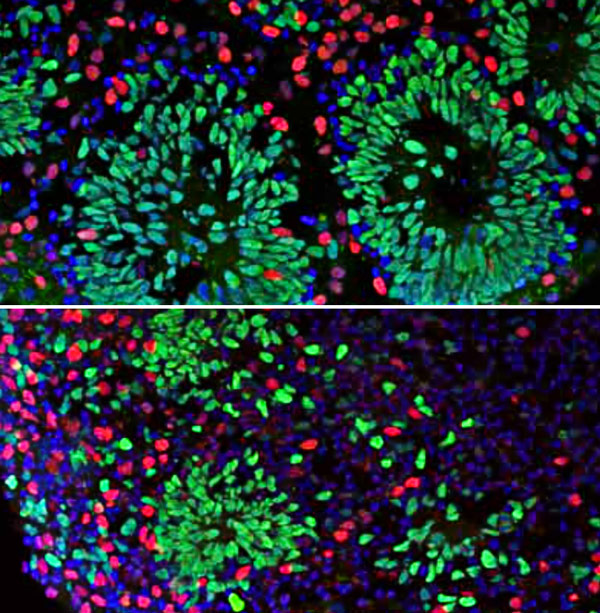 Family tree: Neuron clusters made from the cells of boys with autism (bottom) contain more inhibitory cells and form more connections than do neurons made from their unaffected fathers (top).

Balls of neurons derived from the skin cells of four boys with autism show shared alterations in biology and gene expression, researchers reported today in Cell1. Like many people with autism, none of the four boys have a mutation known to be associated with the disorder.

The findings bolster the idea that people arrive at autism through common pathways — in the case of these four boys, an excess of cells that dampen neural activity, too many connections among neurons and distinct patterns of gene expression. The results also finger FOXG1, a gene that helps orchestrate brain development, as a player in autism.

The study is emblematic of the intense interest in using three-dimensional cell cultures, more playfully dubbed ‘mini-brains,’ to study brain disorders such as autism. This field is less than five years old, but techniques and refinements are rapidly proliferating. Last month, for example, Stanford University researcher Sergiu Pasca and his colleagues reported a new method to create neuron clusters, as well as the ability to slice them into razor-thin sections2.

In the new study, Flora Vaccarino and her colleagues created their neuron clusters by reprogramming skin cells from the boys and their unaffected fathers to form induced pluripotent stem (iPS) cells. These renewable cells can develop into almost any type of cell in the body, including neurons. The neuron clusters the team created mimic the outer portion of the brain, called the cerebral cortex, between 9 and 16 weeks after conception.

Most studies of autism using neurons derived from iPS cells have focused on defined genetic syndromes related to the disorder.

“Those end up being only a minority of cases, and we don’t know how representative they are,” says Vaccarino, professor of neurobiology at Yale University’s Child Study Center. “We wanted to see whether we could use neurobiology to identify a more common developmental pathway that was altered.”

The study points to the power of mini-brains, or organoids, for unearthing the molecular roots of idiopathic autism, the type that has no known genetic cause.

“They identified the molecular pathway involved simply by analyzing changes in gene expression without the need to identify a single DNA mutation responsible for the disease,” says Jürgen Knoblich, senior scientist at the Institute of Molecular Biotechnology of the Austrian Academy of Sciences in Vienna. Knoblich developed a similar culture method but was not involved in the new study.

The researchers selected the boys because of their unusually large heads, or macrocephaly. This well-studied feature of autism is present in about 20 percent of cases, typically in severe ones.

Genes involved in cell growth, neuronal maturation and the formation of synapses, or connections between nerve cells, are all expressed at higher levels in organoids derived from the boys with autism than in those from their unaffected fathers. The cells in the boys’ organoids also divide more rapidly and make more synapses than they do in organoids from the fathers. Other studies have shown that the brains of people with autism have a surplus of synapses.

The organoids from the boys also have an increased proportion of neurons that produce the signaling molecule gamma-aminobutyric acid (GABA), a chemical that dampens neural activity. This result supports the hypothesis that an imbalance between excitatory and inhibitory signaling underlies autism.

One of the most overexpressed genes in the boys’ organoids is FOXG1. Mutations in this gene are associated with having a small head and a severe form of the autism-linked disorder Rett syndrome. Mice lacking FOXG1 have small heads and too few GABA-producing neurons3.

By contrast, the boys have an excess of FOXG1, enlarged heads and a higher proportion of GABA-producing neurons, hinting at a dosage effect with FOXG1, says Vaccarino. FOXG1 may be crucial to the balance of excitatory and inhibitory neurons in the cerebral cortex, she says.

“FOXG1 is really a master regulatory gene in forebrain development,” Vaccarino says. Powerful regulatory genes may hold key insights into biochemical pathways underlying autism. Although the boys have no mutations in FOXG1, they do carry variations in nearby DNA segments that may alter its expression.

This supports the idea that the roots of autism involve DNA sequences outside of genes. “We should look at these regulatory regions in a number of genes, not just FOXG1, to try to put all the pieces together,” Vaccarino says.

Lowering FOXG1 expression to normal levels in the organoids from the boys restores the typical proportion of GABA-producing neurons, the researchers found.

“I think it is remarkable that they could correct some of the phenotype by knockdown of FOXG1,” says Fred Gage, professor of genetics at the Salk Institute for Biological Studies in La Jolla, California, who was not involved in the work.

When the researchers probed the autism and control organoids with electrodes, however, they detected no differences between them in neuronal signaling. Gage calls that result “somewhat disappointing.”

Vaccarino and her team plan to explore their findings in larger numbers of people. They aim to study other genes whose expression is altered in the organoids and to use these structures to investigate the biology of people with autism with normal-sized heads.