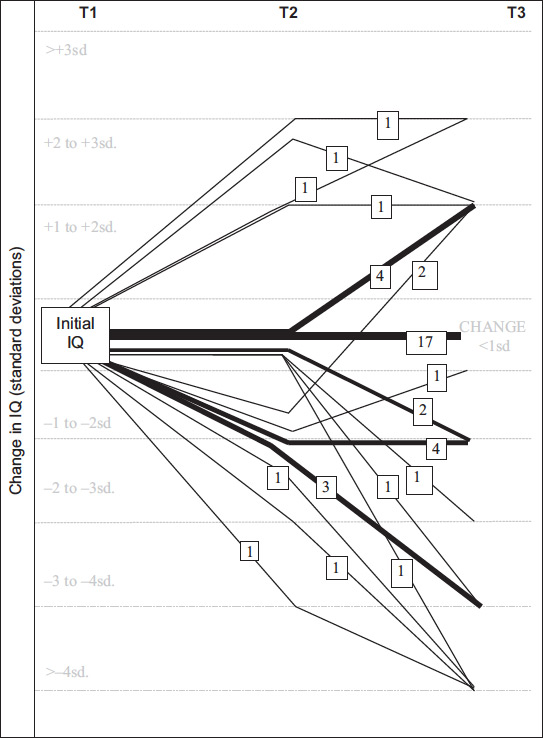 Children who have severe autism symptoms, epilepsy or poor intelligence and language skills fare much worse as they age than their peers with milder symptoms, according to two long-term studies published in July, one of which spanned 40 years.

This trend is particularly pronounced for girls and children who were diagnosed at a younger age, perhaps because those who have more severe symptoms tend to be diagnosed early.

Longitudinal studies, which follow people across time, are generally expensive and time-consuming, and the participants often drop out. Still, these studies provide valuable information about how developmental disorders affect people as they age.

They can also identify what childhood symptoms of autism predict outcomes later in life. Among people with autism, those who have higher intelligence quotients (IQs) in their youth tend to have better life outcomes, such as living independently1.

“Although people know a lot about children with autism, there is much less known about adults,” says Howlin, professor of clinical child psychology at King’s College London’s Institute of Psychiatry. “We thought it would be a good opportunity to keep in touch with these families.”

The new study followed up with 60 of these individuals, now at an average age of 44. The researchers found that childhood IQ is usually stable across life in people with autism. They published their results 15 July in the Journal of Child Psychology and Psychiatry2.

“Very few groups have managed to follow up on individuals with autism over such an impressively long period of time,” says Tony Charman, chair of clinical child psychology at King’s College London’s Institute of Psychiatry, who was not involved in the study.

The second long-term study, published 5 July in Frontiers in Human Neuroscience, also looked at intelligence over time3. That study’s results suggest that severe autism symptoms lead to lower intellectual ability in children with autism, but some experts question that conclusion.

Overall, IQ for the entire group declined from childhood to adulthood, but Howlin and her colleagues attribute the drop to a group of 15 individuals, 5 of them women, who were too impaired to take a regular IQ test.

Of these 15 people, 1 had experienced a major stroke, 7 have epilepsy and nearly all show aggressive or self-injurious behavior. None of them have language skills beyond that of a typical 3-year-old child.

Interestingly, many of the difficult behaviors in this group emerged during the individuals’ teenage years. “Why that’s the case, I can’t say we understand,” Howlin says.

Of 59 people the researchers have data for, 21 participants showed a small decline in their IQ from childhood to adulthood, 27 maintained a stable IQ and 11 increased their scores.

“They emphasize the stability, but there was also quite a bit of difference among the participants,” says Annette Estes, director of the University of Washington Autism Center, who was not involved in the study.

Still, the changes were relatively small in most of the people who showed upticks or drops in their intelligence levels. “We found that IQ in the majority of cases remains quite stable for people whose IQ is in the average range as children,” Howlin says.

The study has some limitations, however. The tests used to evaluate intelligence and language skills changed through the years, making it difficult to compare results. Also, only 11 of the participants are women.

In the second study, Giacomo Vivanti and his colleagues examined IQ and autism severity in 83 children with autism, aged 2 to 5 years, over a two-year period.

At the beginning of the study, the children with more severe autism symptoms also had lower cognitive abilities. The researchers waited one year to do a follow-up assessment of 23children aged 2 to 5 from Vivanti’s clinic and two years for 60 children aged 2 to 3 from another Australian study.

They found that the children with more severe autism symptoms show fewer gains in cognitive abilities, such as using expressive language and refining fine motor skills, than those with less severe symptoms.

This effect is more prominent in the 2- to 5-year-old children, the researchers found. It’s possible that the 2- to 3-year-old toddlers, because they were diagnosed earlier in an early autism identification program, received intensive interventions, improving their cognitive abilities.

“If you don’t learn from other people, especially during early critical periods, it’s going to have an impact on your intellectual development,” he says.

“[The study] did a nice job of posing a very fundamental question about whether autism and intellectual disabilities are related or independent,” says Estes, who was not involved in the work. “I don’t know that the answers they came up with are quite as compelling, but I think that asking the right question is half the battle.”

For example, environmental and genetic factors could affect both the children’s intelligence and autism symptoms, Estes says.

What’s more, abundant evidence shows that autism is associated with brain abnormalities, says Michael Rutter, professor of developmental psychopathology at King’s College London’s Institute of Psychiatry, who was not involved in the study.

“The association [of intelligence] with the severity of autism symptoms may not reflect the effect of symptoms as such, but rather the fact that the symptoms are themselves a reflection of brain pathology,” he says.

The study is also small and may not reflect the wide diversity in autism, notes Howlin.