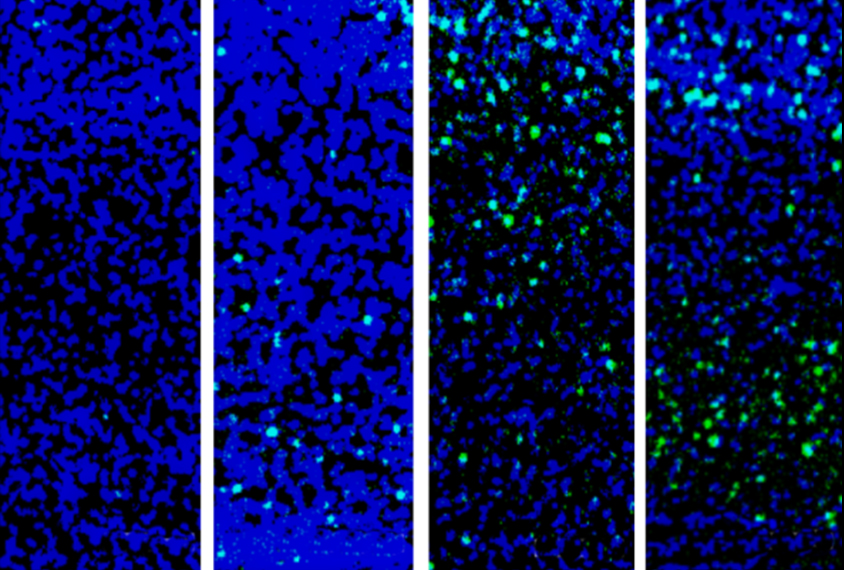 De-stressed: Stimulating the immune system in pregnant mice leads to patterns of neural activity linked to autism-like behaviors in their male pups (second from right) not seen in controls (left). But mice in which a stress pathway has been blocked don’t display these patterns (far right).

Maternal inflammation contributes to autism by sparking an innate stress response in male, but not female, fetuses, according to a new mouse study. The results could help explain why infection during pregnancy is associated with an increased likelihood of having an autistic child.

The integrated stress response kicks in when organisms experience adverse environmental conditions, such as a lack of food or oxygen. When activated, this molecular chain of events turns down protein production in cells to focus them completely on survival. Previous research has tied the response to Down syndrome and neurodegeneration.

The new findings suggest that missing out on protein production during brain development can have marked long-term effects, says study investigator Brian Kalish, assistant professor of molecular genetics at the University of Toronto in Canada. “The idea that an exposure during intrauterine life could activate the integrated stress response, and then program fetal neurodevelopment, was quite a novel finding.”

Researchers previously pinned the link between maternal infection and autism to interleukin 17A (IL-17A), an inflammation signaling molecule that helps coordinate the immune response. Mice exposed in utero to IL-17A exhibit autism-like behaviors, and some autistic children show higher levels of IL-17A than their non-autistic peers.

But the new work, which appeared in Nature Neuroscience in February, is the first to explain how IL-17A can have such a substantial effect on brain development: Prenatal exposure to IL-17A — perhaps along with other immune factors — jump-starts the integrated stress response. 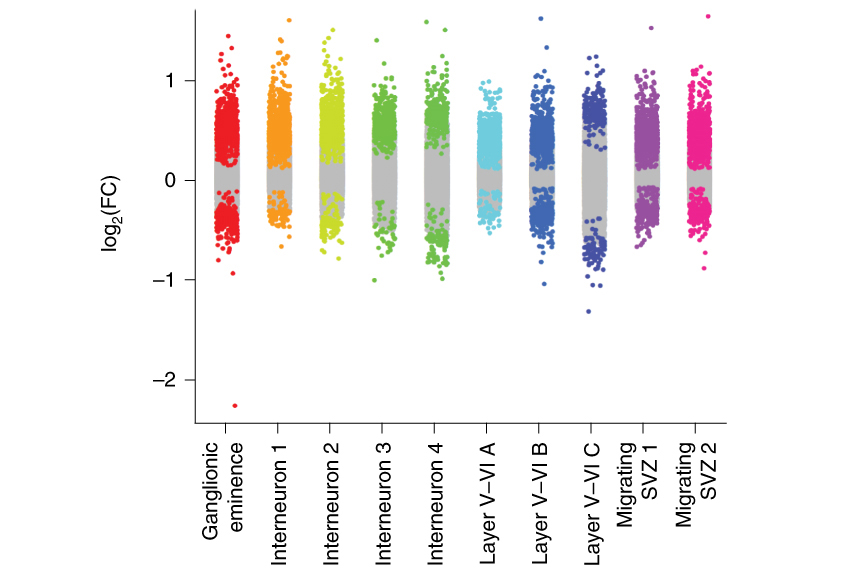 In their genes: Male mouse fetuses exposed to maternal immune activation show atypical patterns of gene expression throughout the brain.

As a first step toward understanding the link between IL-17A and autism, the researchers surveyed gene expression in the brains of fetal mice whose mothers had been injected with poly(I:C), a molecule that mimics a viral infection and stimulates the production of IL-17A, among other signaling molecules. Compared with controls, male mice exposed to this ‘maternal immune activation’ (MIA) in utero had lower expression levels of genes involved in protein production and produced less protein overall.

The pattern broke down for female mice exposed to MIA, however. Compared with their male counterparts, the female mice showed higher expression of genes involved in protein production, and they made about as much protein as controls, the study shows. They also did not display markers of the integrated stress response.

Kalish was careful to look at both male and female mice in his study, he says, because three times as many men as women are diagnosed with autism, and most studies on MIA have focused only on male pups.

Other recent studies have similarly found that maternal inflammation affects males and females differently, but the reason for the discrepancy — and whether it is linked to sex differences in autism prevalence in people — remains unclear.

“We only scratched the surface in understanding sex differences in response to MIA,” says study investigator Eunha Kim, a postdoctoral associate at Harvard University.

Given how little is known about the response to MIA in female mice, it’s difficult to say whether females are completely protected from these stress-response-mediated changes. They might respond to MIA if it happened at a different intensity or time during gestation, says Jaclyn Schwarz, associate professor of psychological and brain sciences at the University of Delaware in Newark, who was not involved in this study.

Schwarz notes that the MIA-induction regimes used in the study were created for male mice. “One thing we always have to think about within sex differences research is, are the models developed just because we were looking for the results in males?” she says.

But this new insight provides a promising basis for future research, says Mady Hornig, associate professor of epidemiology at Columbia University, who was also not involved in this study. “What’s great about this is that it gives you a whole new set of questions.”

That said, Kalish notes, this model comes with limitations: Because these mice have autism-like traits as a result of an environmental exposure, they might show more variation in their phenotypes than mice with mutations in autism-linked genes. “It’s important to recognize that larger studies are necessary to fully validate these results.”

And the mice used in these experiments were all from the same strain and source; it is possible that other mice could respond to MIA differently, Hornig says. Kalish and his team observed that MIA did not activate the same stress response in genetically identical mice from a different facility, likely because of differences in the animals’ microbiomes, they say. Members of the team have previously shown that certain microbiota are essential to IL-17A production.

Despite these challenges, Kalish says that environmental models of autism are essential. “Environment is more difficult to model in mice and other animals, but in humans [it] likely plays a much more important [role],” he says. “So using these models that use more environmental exposures is particularly critical to understanding the complex pathophysiology of autism.”