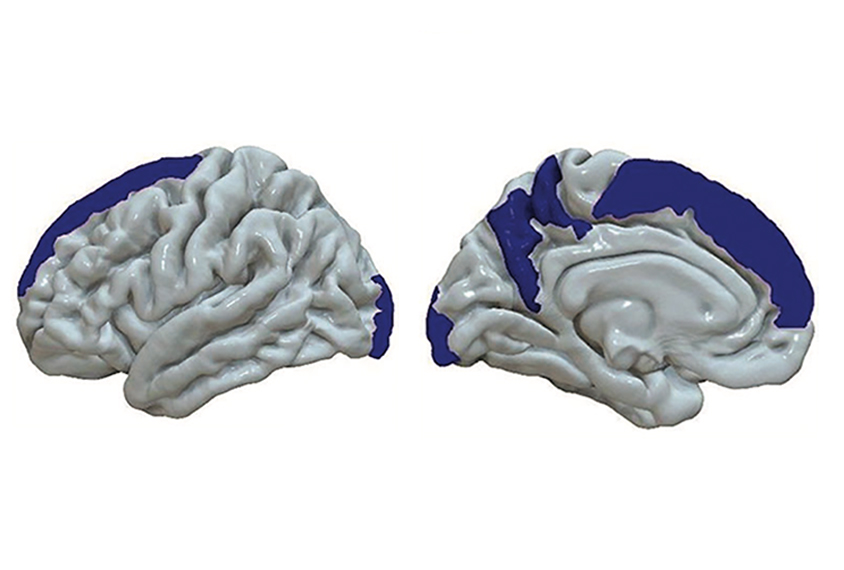 Thinning effect: Genetic variants that increase levels of the inflammatory molecule IL-6 track with reduced thickness of the superior frontal gyrus and other regions (blue).

Inflammation may inflate or thin out brain regions tied to autism and schizophrenia, researchers report in a new study.

The findings add nuance to the long-held hypothesis that immune activation elevates the risk for neurodevelopmental conditions. Autism, for example, is associated with prenatal exposure to infection, previous studies show.

Taking a different approach, the new work focuses on how a genetic predisposition to inflammation affects brain development in the general population, says John Williams, research fellow at the University of Birmingham in the United Kingdom, who conducted the work with lead researcher Rachel Upthegrove, professor of psychiatry and youth mental health at the university.

By pinpointing where inflammation leaves its mark in the brain, the findings serve as a guidepost for future studies of people with neuropsychiatric conditions, he says. “We think that it points to something that’s fairly transdiagnostic.”

For their analyses, the team drew on brain imaging and genetic data from 10,828 women and 9,860 men in the general population who participated in the UK Biobank. They explored how 1,436 possible structural changes in the brain track with having single-nucleotide variants previously shown to increase circulating levels of five inflammatory molecules — interleukin 1 (IL-1), IL-2, IL-6, C-reactive protein and brain-derived neurotrophic factor.

Three variants thought to boost IL-6 were associated with 33 structural changes, most notably increased volume in the middle temporal gyrus and fusiform gyrus, and decreased cortical thickness in the superior frontal gyrus — all brain areas implicated in autism. Variants associated with other inflammatory molecules did not track with brain changes, the researchers found.

The results jibe with those from a 2021 study suggesting that prenatal exposure to a range of inflammatory molecules, including IL-6, corresponds with brain connectivity differences in adulthood in people with major depression or psychosis, as well as in some controls.

“There is a precedent for finding brain differences that are perhaps overlapping with what one sees in certain neuropsychiatric disorders,” says Mady Hornig, associate professor of epidemiology at Columbia University, who helped lead the 2021 work but was not involved in the new study. But the researchers need to validate the effects of genetic variants on IL-6 signaling in the brain in future work, she says.

Williams and his team used a technique called mendelian randomization that approximates a series of randomized controlled trials by sorting participants into various comparison groups: those with a given inflammation-boosting variant and controls. Because genetic traits are randomly assigned across the population at conception, the method controls for a range of confounds, such as environmental factors, that may influence inflammation.

“I think this study took a really creative approach in using this mendelian randomization strategy to try and generate a kind of quasi-causal test in humans” of how shifts in immune function can affect the brain, says Armin Raznahan, chief of the section on developmental neurogenomics at the U.S. National Institute of Mental Health, who was not involved in the study.

Although most participants are neurotypical, 216 have a diagnosis of autism, schizophrenia, depression or bipolar disorder. Excluding them from the analyses had no effect on the results, Williams says, and they were too few in number to explore how inflammation-related variants relate to specific conditions.

In the IL-6-linked middle temporal gyrus, 47 genes were overexpressed compared with the rest of the brain, an analysis of postmortem tissue data from the Allen Human Brain Atlas revealed. One gene, the autism-candidate gene MET, regulates the immune system and has links to altered brain connectivity and gastrointestinal symptoms in autistic people. Though the gene encoding IL-6 itself was not overexpressed in this brain region, the proteins encoded by the overexpressed genes form a network that interacts with IL-6, the researchers subsequently found.

By mapping the overexpressed genes onto databases of known gene function, the researchers found that many of these genes are associated with conditions such as autism, schizophrenia and epilepsy, and play a role in brain development and synaptic signaling. The work was published 30 March in JAMA Psychiatry.

The findings provide support for a causal relationship between inflammation and changes in brain structure, and highlight inflammation as a possible common biological pathway underlying several conditions, Williams says.

They also complement those from another mendelian randomization study, published in February, that revealed associations between genetic variants for 15 different inflammatory regulators and risk for several conditions, including autism, schizophrenia and attention-deficit/hyperactivity disorder.

This study is a “tantalizing” look at the genetics half of the two-hit model, in which genetic traits and environmental triggers interact to influence someone’s risk for neurodevelopmental conditions, Hornig says. But additional studies are needed to explore how these genetic factors tie into the effects of environmental exposures prenatally or later in life, she says.

The new work is also several steps removed from clinical populations, Raznahan says. Large databases such as the UK Biobank give researchers the power to ask questions that would otherwise be out of reach, he says. But this power comes at the cost of studying adults from the general population, who are likely beyond critical developmental windows.

“We have to be aware of the caveats every time you reach for those new questions,” he says.

The researchers say they plan to use their findings to guide where they test for brain imaging changes in a randomized controlled trial exploring the effects of the IL-6 inhibitor tocilizumab in people with schizophrenia.