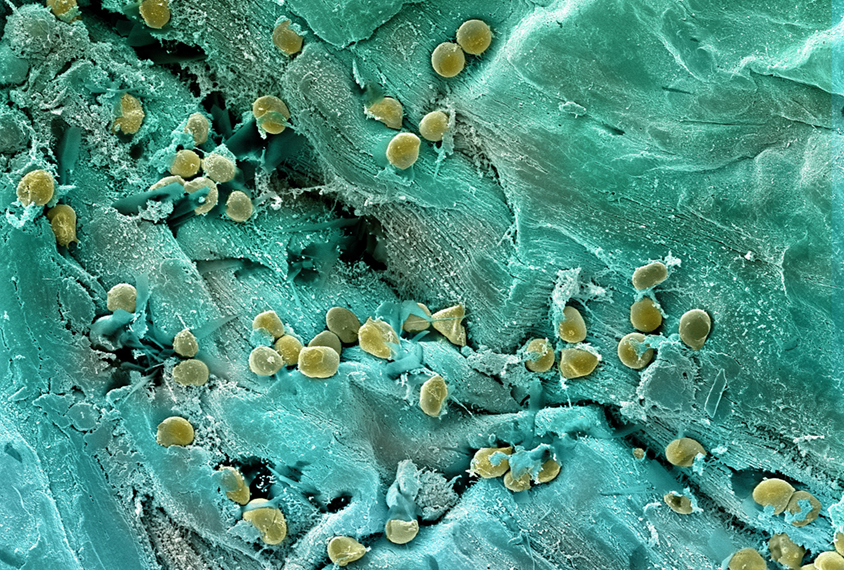 Immune boost: Changes to a mother mouse’s gut microbiome may instill an overactive immune response in her pups.

Pregnant mice that mount an immune reaction have pups with autism-like traits and an increased susceptibility to gut inflammation, according to a new study.

The results may help to explain why many autistic people have gastrointestinal issues, says study investigator Eunha Kim, a postdoctoral researcher in Jun Huh’s lab at Harvard University.

Previous work has shown that prenatal exposure to a mother’s immune response — elicited by a viral mimic — induces autism-like traits in mice. And a severe infection or an overactive immune system during pregnancy increases the likelihood of having an autistic child, other studies have found.

But a different mechanism underlies the gut issues, Kim and her colleagues found. They stem from alterations in the mother’s gut microbiome — the mix of microbes that inhabit the stomach and intestines — to which the pups are exposed after birth. The mother’s atypical gut microbiome, in turn, primes the pups’ immune system to overreact to infections later on.

Studying this newly identified mechanism may help researchers better understand how maternal immune activation and autism are linked to other conditions, such as allergies, says John Lukens, associate professor of neuroscience at the University of Virginia in Charlottesville. Lukens was not involved in the study but wrote about the findings in a preview article.

“It could be some kind of evolutionary advantage that’s gone haywire,” he says.

Kim and her colleagues injected pregnant mice with either a mock virus or saline. As adults, the male offspring exposed to the mock virus had atypical social behaviors, akin to those seen in people with autism.

The team then infected the adult offspring with the bacterium Citrobacter rodentium, which can cause an inflammatory gut condition resembling colitis. Ten days after infection, the mock-virus-exposed animals of both sexes had shortened colons — a sign of colitis — and increased levels of the inflammatory immune molecule IL-17A.

When the mice born to mock-virus-treated mothers were instead reared by saline-injected mothers, they still had autism-like behaviors, but they no longer produced a rapid inflammatory response to a pathogen. The offspring of saline-treated mice that were raised by mock-virus-treated mothers, on the other hand, did — suggesting that the enhanced immune response is acquired after birth. The findings were published in Immunity 7 December.

One way that a mother influences her offspring’s immune system during typical development is through the gut microbiome. Mice, in particular, eat their cagemates’ feces, which alters the contents of their gut. In this way, changes to a mother mouse’s microbiome can disrupt how her pup’s immune system is established.

Pups reared by mothers with this atypical, less diverse microbiome have altered helper T cells, which release IL-17A and other immune molecules to sound the alarm for other immune cells after exposure to a pathogen. The T cells in these pups, the study shows, have differences in the accessibility of their chromatin — the tightly coiled form of DNA — which causes them to produce an unusually high level of IL-17A, and thus inflammation, in response to an immune system challenge.

Injecting pregnant mice with a compound that blocks IL-17A before treating them with the mock virus prevented the pups they reared from having a heightened immune response to a later infection, the team found, confirming the immune molecule’s involvement.

Though the study doesn’t explain how autism arises in people, “it’s giving you information about the role of early-life microbes in immune reactivity,” says Jane Foster, professor of psychiatry and behavioral neurosciences at McMaster University in Hamilton, Canada, who was not involved in the study.

Similarly, “blocking IL-17A activity may be a potential therapeutic target” for preventing gastrointestinal issues in some children, Kim says. But because the molecule has many other functions, “this needs to be further carefully investigated,” she says.

A safer option, Lukens says, may be to try to normalize a mother’s gut microbiome with a specific diet or probiotics.

But it is unclear how the microbiome would need to change to achieve that goal. “The thing that’s missing here is they didn’t actually map those microbes” to pinpoint which ones are important, Foster says.

Kim and her colleagues plan to look into this next. They also plan to explore whether these findings hold up in children exposed to a maternal immune response, Kim says.