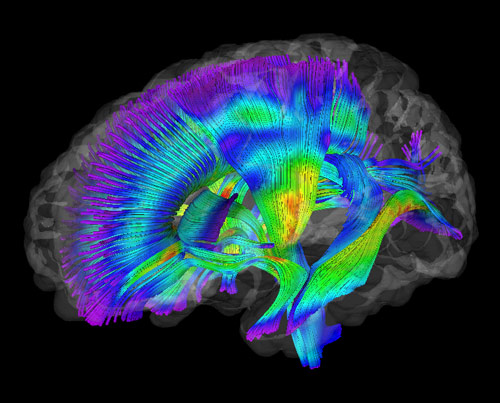 Building bridges: In 6-month-old babies who later develop autism, white matter bundles have more structural integrity than do those in infants who do not develop the disorder.

Building bridges: In 6-month-old babies who later develop autism, white matter bundles have more structural integrity than do those in infants who do not develop the disorder.

The development of white matter tracts, the nerve bundles that join one brain region to another, is different in babies who go on to develop autism compared with those who do not, according to a new study.

Researchers scanned the brains of infant siblings of children with autism — who have an increased risk of developing the disorder themselves — several times during their first two years of life. The so-called ‘baby sibs’ who go on to receive a diagnosis of autism at 24 months of age have distinct brain patterns at 6 months and abnormal neural development from 6 to 24 months, according to the study. The results were published 17 February in the American Journal of Psychiatry1.

“The story is that autism is an unfolding process, not something that happens in the third trimester and then is done,” says lead investigator Joseph Piven, professor of psychiatry at the University of North Carolina-Chapel Hill. “We see the brain changing over time in a dynamic way.”

It’s too early to speculate how these specific brain changes might ultimately lead to autism, the researchers say.

But the findings add to other published and unpublished studies identifying neural signatures of autism in 6-month-olds.

The new study “was music to my ears, because it superimposes on other infant-sib studies finding all kinds of brain signatures by 6 months,” says Charles Nelson, professor of pediatrics and neuroscience at Harvard Medical School, who was not involved in the new study. Nelson is using a different imaging technology to measure baby sibs’ brain waves. “It’s making us all wish that we’d started [scanning] even younger.”

These kinds of biomarkers, especially if paired with information from genetic and behavioral screens, could potentially identify children with autism long before symptoms appear, Piven says. Early detection would ideally lead to interventions that improve behaviors.

“It gives you this sense that you can jump in during this window when the brain is unfolding and maybe make a difference,” he says.

Since 2007, Piven’s group and three other centers in the Infant Brain Imaging Study have been collecting longitudinal data on hundreds of baby sibs, including several types of brain scans, blood samples for future genetic studies and, beginning at 2 years old, standardized tests for autism.

The new study analyzed diffusion tensor imaging (DTI) scans from 92 of these infants, 28 of whom received an autism diagnosis at 24 months.

DTI measures the integrity of brain connections by tracking the movement of water molecules. In white matter, water tends to move along nerve fibers in one direction, whereas in gray matter, the tissue in which neuronal cell bodies reside, “water moves all over the place,” says Jason Wolff, a postdoctoral fellow in Piven’s lab.

This study examined 15 white matter tracts, each chosen because it had been previously linked to autism. In scans done at 6 months, 12 tracks were significantly different in the babies that would go on to develop autism than in those who would not.

FA increases with age, and is typically thought to mark brain maturity2. “You’d expect it to be lower in autism,” notes Kevin Pelphrey, director of the Yale Child Neuroscience Lab, who was not involved in the study.

Still, he points out that it’s hard to interpret what a high FA means at 6 months because white matter undergoes so many changes during early development. “Just showing that there’s a difference is important,” Pelphrey says. “What more FA or less FA means at this point, I’m not sure.”

For instance, a high FA in the autism group could mean that the millions of nerve fibers that make up the white matter bundles are not getting pruned appropriately at 6 months.

One major caveat in the new study is the lack of a control group of babies whose older siblings do not have autism. Pelphrey’s studies suggest that baby sibs have unusual brain signatures even if they don’t go on to develop autism.

Another important factor is time: The brain changes rapidly in the first few years of life. For example, the study found that at 24 months, toddlers with autism have lower FA values than those who do not. Piven plans to continue to scan the same group of children until age 3, because other baby-sib studies have shown that some children lose their autism diagnoses between age 2 and 3.

These abnormal trajectories of brain development only come to light when studies follow children over many years, Pelphrey notes. “That seems to be the story in autism, over and over again,” he says. “At this point, I think all imaging studies should be longitudinal or we shouldn’t be publishing them.”