Individualized autism therapy? There may be an app for that 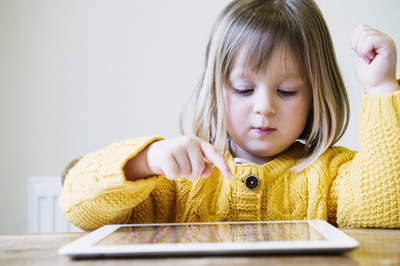 A touch-screen game based on popular cartoon characters may one day allow scientists to tailor treatments for children with autism, suggest unpublished results presented today at the 2014 Society for Neuroscience annual meeting in Washington, D.C.

The game is designed to evaluate implicit learning, which occurs without the learner being aware or explicitly taught. Autism researchers are increasingly interested in implicit learning because many of the skills with which people who have autism struggle, such as language and the rules of social interactions, are learned implicitly.

Studies so far have yielded inconsistent results about whether people with autism have deficits in implicit learning. However, few have examined implicit learning in children younger than 7 — a key age.

“This is the age at which many kids with autism are receiving behavioral intervention,” says Rebecca Jones, a postdoctoral researcher who works with Catherine Lord at Weill Cornell Medical College in New York, who presented the results. Studying this age group is especially important because behavioral interventions often involve implicit learning, Jones says.

To engage young children, the researchers turned, like many parents do, to tablet computers. They asked 19 typically developing children, aged 3 to 7 years, to play a game based on popular cartoons. The object of the game was to touch the screen whenever they saw a particular character — for example, SpongeBob SquarePants.

To the researchers, these characters weren’t squid and snail, they were clues to the children’s implicit learning abilities.

The researchers clocked how fast the children pressed the screen when SpongeBob appeared, and found evidence that they subconsciously picked up on the fact that the squid usually signaled SpongeBob’s imminent arrival. At first, they touched the screen just as quickly whether the squid or snail preceded SpongeBob.

After a while, though, the children became slower to recognize SpongeBob when he appeared after the snail. It’s not clear why this happened, rather than their getting faster at identifying SpongeBob’s appearance after the squid. But, says Jones, “the important thing is the difference between the low-probability and high-probability cues.”

Curiously, toward the end of the test, this difference disappeared. Another analysis of the data suggests a possible explanation.

This suggests that moving from an implicit to an explicit awareness may be important for cementing some kinds of learning, Jones says. This progression may be especially important for people with autism, who sometimes describe getting along by learning explicit rules about social interactions. Or it may be that an intervention should aim to move children from an explicit understanding of social rules to an implicit, intuitive one.

At this point, these ideas are speculative, Jones says. The researchers are introducing their game to young children with autism or intellectual disability in an attempt to find out whether there are implicit learning deficits specific to autism.

They are also investigating whether the game can predict the effectiveness of a three-month behavioral intervention in children with autism. Eventually, this approach may allow them to develop ‘learning profiles’ for children beginning treatment and match them with the therapies that are most likely to help.