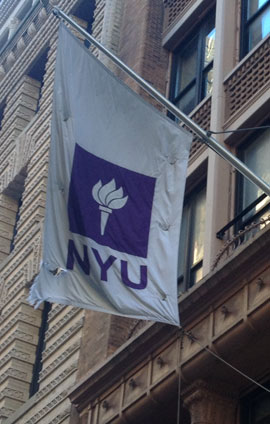 Life for most New Yorkers is getting back to normal after the unprecedented destruction caused last week by Hurricane Sandy, but researchers at New York University (NYU) face a painful and painstaking recovery.

Nearly 8,000 laboratory rodents drowned in a basement facility at NYU’s Smilow Research Center, on the east side of the city, during the fast-moving floods that swept through parts of Manhattan. The building’s basement also housed several heavy and expensive machines for brain imaging, including magnetic resonance imaging scanners. Many labs lost their biological samples when back-up generators failed, cutting power to freezers and refrigerators.

Scientists estimate that some researchers have lost about a decade’s worth of work, including 40 strains of mice genetically engineered to study neural circuits in the cortex. Up to 70 percent of NYU’s neuroscience labs are housed in that facility, including many engaged in work relevant to autism.

“Some of the smaller labs are done,” says an employee who is familiar with the situation, but asked to remain anonymous because of the sensitive nature of the information.

The damage follows a major blow to autism research in May, when a freezer malfunction at Harvard University destroyed a large number of brain tissue samples.

Nor is this the first storm-related loss of research animals and samples. Tropical Storm Allison in 2001 and Hurricane Katrina in 2005 flooded basement storage facilities at universities in Houston and New Orleans, respectively, destroying animal facilities and other resources, and setting back research for years.

These disasters should make administrators question whether basements are the best place for housing valuable mouse lines and expensive machinery, even with emergency evacuation plans in place, say some researchers.

“People need to consider the fact that for animal facilities and research, you need a place that can really deal with the flood and storm surge,” says James Lupski, professor of pediatrics at Baylor College of Medicine in Houston, whose lab suffered serious damage during Tropical Storm Allison.

NYU has not officially released details about the losses, and officials did not respond to interview requests. Because the animal rights group People for the Ethical Treatment of Animals has filed an official complaint against NYU to the National Institutes of Health, the university has also asked employees to refrain from talking to press.

However, Gordon Fishell, who studies how autism-linked genes influence brain organization, told The New York Times on 31 October that he lost 2,500 mice. Fortunately, he had shared most of these strains with other researchers, or placed them at The Jackson Laboratory in Maine, which will help him rebuild his resources.

A few other labs have been able to salvage some of their work, manually restocking freezers to keep them cold, or rescuing samples and transferring them to freezers at other institutions in the city.

“They are walking up dark stairwells carrying pounds of dry ice and liquid nitrogen,” the NYU employee told SFARI.org. “The smell is terrible so they can only stay in the labs for a few minutes at a time.”

However, as of Tuesday, most scientists were still unable to get into the building. The floodwater is contaminated with fuel and must be cleared by special tanks. And data servers are offline so it’s unclear what information has been lost.

Some researchers also missed a National Institutes of Health grant deadline, but were granted an extension. “I’m more worried about grants in a year or two,” the employee says. “It’s a nightmare.”

Lupski says after Tropical Storm Allison ravaged Houston, his team spent months getting back on track. Insurance typically covers damage to instruments and supplies, but it doesn’t begin to recoup the loss of time and money. “Even just building a colony by getting another mating pair can take time,” he says.

Lupski and others at Baylor lost of tens of thousands of mice after a basement animal facility flooded. They struggled for weeks to preserve tissue and other samples, a collection that had taken 20 years to assemble from thousands of patients.

Like the NYU researchers, they lugged buckets of dry ice and liquid nitrogen up flights of stairs to keep samples cold. (They also had the horrific task of donning hazmat suits in the June heat to dispose of the dead animals, Lupski recalls.)

The University of Texas Health Center suffered similar damage, losing thousands of animals and more than $55 million in research. University officials later vowed that they would no longer house animals in basements.

In 2007, the university opened a new research facility equipped with submarine doors, floodgates, raised banks and back-up power to ward off water damage. Engineers worked with animal experts to design a facility that houses animals in its upper levels, with its own power and ventilation system.

The university fitted the building with six-foot floodgates that surround it like a dyke. “Any storm known to be coming, they close the floodgates,” says Lupski.

NYU isn’t the only institution to house rodents and other animals in the basement. Most do so for practical reasons: Animals must be kept in controlled cycles of light and dark, for example, which is easier to do with no natural light to block. Much of the equipment needed to maintain the animals is too heavy for upper floors, and it’s cheaper to connect water drainage pipes and other utilities from the basement.

Some institutions are beginning to move animal facilities to higher floors, though not necessarily because of flooding concerns.

The newer neuroscience facilities at the Massachusetts Institute of Technology, for example, house animals on higher floors.

“When we designed our neuroscience building, placing the animal facility on the top floor was a concerted decision between the scientists, architects and local government officials,” says Li-Huei Tsai, director of the Picower Institute for Learning and Memory, which opened at its current location in 2005. “We wanted to make sure that potential flooding does not, and will never, affect our facility.”

Fortifying buildings against floods is an expensive endeavor, and many administrators find themselves unable to justify the cost of preventing the types of floods that occur once in decades.

“In any kind of institution, it’s always going to be a risk-benefit analysis,” notes Lupski. “Most don’t have $50 million to make that improvement, even if the investment [they are protecting] is much greater than $50 million.”

Other facilities in the New York area weathered Sandy better than NYU did, sustaining little or no damage.

Despite being in the storm’s path, Rutgers University Cell and DNA Repository (RUDCR) in New Jersey, which houses samples from a number of autism collections, did not lose any tissue samples or equipment.

“The RUCDR has been designed structurally and operationally for these types of events and all systems executed according to plan,” says Michael Sheldon, director of its stem cell laboratory. The facility never lost power, even though buildings around it did, he says.

Researchers at other New York City institutions, such as Columbia University and Rockefeller University have reached out to NYU researchers, offering lab space and resources.

Tragedies like this one highlight the importance of sharing, notes Lupski.

Before Allison hit, Lupski had shared many of his mice with his collaborators, and could rely on those to repopulate his colonies. “A lot of people don’t want to share their mice,” he says. “If you were smart enough, early on you would have sent your strains to other people to work on.”