In autism, small group of neurons attuned unusually to faces 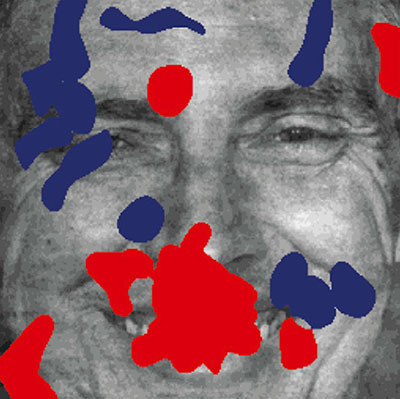 Face view: Neurons attuned to individual features respond more often to the mouth in people with autism (red) than in controls (blue).

A subset of neurons in the amygdala is dedicated to recognizing eyes. But in people with autism, they may respond instead to the mouth, according to a report published 20 November in Neuron1.

The finding may explain why people with autism avoid making eye contact. “This is not some finding of an arcane task that is out there in isolation,” says lead investigator Ralph Adolphs, professor of psychology and neuroscience at the California Institute of Technology. “It’s linked to quite a sizeable literature now.”

The technique would normally be too invasive, but for people with epilepsy, doctors use electrodes to try to locate the source of their seizures. “They are sitting in the hospital bed for a week waiting to have a seizure and we can piggyback research studies on that,” says Adolphs.

In 2011, Adolphs’ team used the same technique to find a group of neurons in the amygdala — the nub of brain tissue that processes memory and emotions — that respond only to whole faces.

The new study found that the neurons in this groupare the same in people with autism as in controls. But another subset of the neurons, which detects only the eyes, behaves differently.

“I am in awe of their study. This is only two subjects, but it’s very difficult to do and they did a fantastic job,” says Ami Klin, director of the Marcus Autism Center in Atlanta, Georgia.

Eye-tracking devices that can pinpoint exactly where someone is looking have shown that people with autism prefer to look at someone’s mouth rather than at their eyes. These differences in attention may even emerge as early as 2 months of age, according to a study led by Klin and published this month in Nature.

Other techniques, such as functional magnetic resonance imaging (fMRI) of the brain, can pin down activity to about a 1-millimeter region of the brain, says Katalin Gothard, associate professor of physiology at the University of Arizona, who was not involved in the study. “But that square millimeter of the brain contains thousands and thousands of neurons,” she says. “There is a whole zoo of cell types that would be all flattened together in a gross average.”

Gothard says she hopes to collaborate with Adolphs’ team to identify neurons in monkeys that are similarly attuned to particular facial features. This would allow researchers to conduct experiments in monkeys that are not possible to do in people, she says, and identify how exactly people and monkeys differ in their social development.

In the new study, Adolphs and his colleagues recorded activity from 37 neurons in the amygdala of two people with autism and 54 neurons in eight controls as they looked at photographs of faces. The pictures were mostly blurred, with random bubbles revealing parts of the face. The participants saw 120 photographs in all and indicated whether the faces looked happy or sad.

The same neurons that fire in response to a feature inside a bubble also activate when that feature is seen in isolation. This confirms that these neurons are specifically intended to recognize that feature, the researchers say. What’s more, people with autism respond more quickly and accurately when looking at mouths; controls do so with eyes.

The study was performed in adults, so the results say nothing of whether this focus on the mouth rather than on the eyes is a cause or consequence of autism, says Klin.

“The brain doesn’t just determine who we’re going to be,” Klin notes. “The brain also becomes who we are.”

Adolphs and his colleagues plan to recruit children with autism undergoing epilepsy surgeries at Harvard Medical Center, which may resolve this issue.