In autism-related disorders, RNA turns out to be key 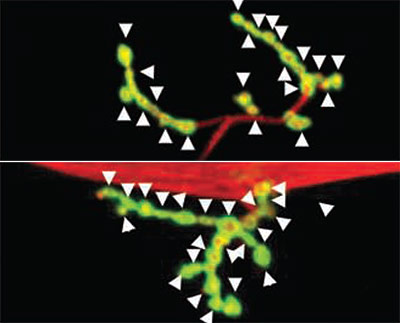 Mutant flies: Lack of either the fragile X syndrome protein (top) or of an enzyme that unwinds RNA (bottom) leads to abnormal neuronal junctions in flies.

An enzyme called TOP3beta that may keep RNA tangle-free as it’s translated into protein is missing in some people with schizophrenia and learning difficulties. The enzyme also cooperates with FMRP, the protein missing in fragile X syndrome, to bind RNA, suggesting a role in protein synthesis. That’s the upshot from two studies published in the September Nature Neuroscience1, 2.

The notion that TOP3beta may play a role in neurological disorders first emerged when researchers found a rare deletion in members of a Finnish population who have an elevated risk of schizophrenia and intellectual disability. The deletion encompasses only TOP3beta and one other gene.

The researchers were able to home in on the TOP3beta deletion because of the prevalence of rare genetic mutations in northern Finland. This can be traced to the area’s unusual pattern of colonization, which mostly ceased after a few bursts of immigration in the 16th century. As a result, the few rare mutations present in the initial colonizing group are unusually common in the current population.

“Trying to identify the genes important for common and complex diseases is like looking for a needle in a haystack,” says Nelson Freimer, professor of psychiatry at the University of California, Los Angeles, and an investigator on the Finnish study. “Special populations within Finland can give you a bigger needle.”

The researchers found that a small deletion of the chromosomal region 22q11.22 is about 100 times more common in the northern part of Finland than in the rest of the country. People from this region who have schizophrenia are twice as likely to have the deletion as others in the region. The deletion is located near 22q11.2, a region of chromosome 22 that is associated with autism and schizophrenia.

The 22q11.22 deletion also increases the likelihood of intellectual disability and mild learning disabilities. All four people identified as lacking the region on both copies of a chromosome have cognitive impairment; two of them also have schizophrenia.

Meanwhile, two other teams had been independently investigating TOP3beta function, finding an intriguing relationship between it and FMRP.

Both teams found that the two enzymes together bind RNA during the translation of sequences into protein. Based on the biochemical data alone, it was difficult to say whether this finding might have any clinical relevance, however.

Then last year, the teams saw preliminary findings from the Finnish study in an online abstract at the 2012 American Society of Human Genetics meeting.

“It’s very exciting for us to see the hard, boring work at the beginning go all the way to clinical relevance,” says Weidong Wang, lead researcher on one of the teams.

At first it was difficult to convince people of the finding’s relevance because it defined an unexpected role for TOP3beta, says Wang. Although FMRP is known to be involved in translation, TOP3beta belongs to a family of enzymes called topoisomerases that are believed to untangle DNA during cell division.

Wang and his team found that instead, TOP3beta unravels knots in RNA in human cells in culture.

RNA topoisomerases are known to exist in bacteria, but Wang’s team is the first to find such an enzyme in mammalian cells.

Bacteria have a single topoisomerase that acts on both RNA and DNA, so it is logical that this may have evolved into separate RNA and DNA topoisomerases in higher-order organisms, she says.

Another study, published earlier this month in Nature, found that DNA topoisomerases enable the expression of especially long genes, more than a quarter of which are linked to autism3.

“The idea that topology is important, not only for DNA transcription but also for RNA translation, is something these studies really highlight, and that’s not something people had appreciated before,” says Mark Zylka, associate professor of cell biology and physiology at the University of North Carolina, Chapel Hill, who co-led the Nature study.

It is possible that TOP3beta also acts on DNA, notes Zylka. A 2001 study found an interaction between TOP3beta and CHD8 — an autism-linked protein that binds to DNA4.

The interaction with FMRP, which inhibits protein synthesis, bolsters the theory that TOP3beta may function at RNA. The two new papers both report finding a complex between FMRP, TOP3beta and an RNA processing enzyme called TDRD3, and that these enzymes localize together at RNA during translation.

The fact that both studies found the same result is “very impressive,” says Zylka. “Sometimes you wonder if a finding’s ever going to be reproduced, but when you have two papers come out at the same time, showing the same thing, this immediately highlights that it’s truly believable.”

The findings also suggest a link between TOP3beta and fragile X syndrome.

Most people with fragile X syndrome lack the FMRP protein, but researchers have found one individual with a mutation in FMR1, the gene that encodes FMRP. The protein made from this version of FMR1 does not bind to TOP3beta, suggesting that disrupting this interaction may lead to fragile X symptoms.

Wang’s team also found that TOP3beta’s targets in human cells overlap with some of those shown for FMRP in mouse brains. However, these data may be problematic because they compare findings from two different species, says Darnell.

How FMRP and TOP3beta work together is still unclear, but the results suggest that they have opposing functions. Mice lacking either protein have abnormal synapses, the junctions between neurons, but those lacking both have normal synapses. Excess FMRP leads to deformed fruit fly eyes, an effect that is worsened when the flies are also missing TOP3beta.

If that’s the case, topoisomerase inhibitors, which have long been used to treat cancer, may be beneficial for people with fragile X syndrome, says Wang.

Correction: This article has been modified from the original. An earlier version of the image caption incorrectly referred to mice instead of to flies.