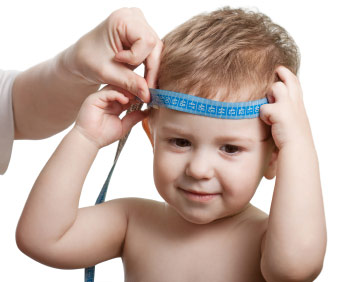 Girls diagnosed with autism have slower brain growth in the first year of their life than controls, whereas boys’ brains grow at the same rate as those of controls, according to a population-based study in Norway. The results were presented Saturday at the International Meeting for Autism Research in Toronto.

Exactly how head size varies in children with autism has been a matter of debate, depending on where the study took place and the age of the participants.

Researchers from the Norwegian Institute of Public Health, analyzed data from 90,000 children born between 1999 and 2007, including 249 diagnosed with autism at age 3. The male to female ratio of those with autism in the study is 4.2 to 1, in line with average rates. (The overall prevalence rate is low because at 3 years of age, not all children with autism in the group have been detected.)

All infants had their head size measured six times in the first year of life, and weight and length measured regularly from birth to 36 months as part of well-baby clinics that are a standard of healthcare in Norway.

The researchers found little difference in head growth between the 203 boys who were later diagnosed with autism and those who were not. But the 46 girls who were later diagnosed with autism started out with smaller heads and had slower head growth throughout the first year of life than did typically developing girls. At 12 months, head size of girls in the autism group was an average of 7 millimeters smaller than that of typically developing infants.

The researchers also looked at the incidence of macrocephaly, or a larger-than-normal head, when the infants were 1 year old. About 12 percent of boys later diagnosed with autism had a head size in the highest 3 percent, compared with only 3 percent of the typically developing group. Only one girl in the autism group had macrocephaly at 1 year.

Conversely, 27 percent of girls in the autism group had a smaller-than-average head, or microcephaly, at 8 months compared with 3 percent of the controls. Among boys, there was no difference in the incidence of microcephaly between those who later developed autism and those who did not.

Well-baby clinics in Norway do not typically measure head size beyond 1 year of age, so it’s not clear how head size varies in toddlers.

The study is significant both for its scale and because it analyzed data from the general population. Most studies of head size have focused on children recruited through a clinic. Because children with more severe symptoms are the most likely to visit clinics, those studies are potentially subject to greater bias.

Several studies have found accelerated head growth in the first year of life, and brain imaging studies have implicated specific parts of the brain. One study of postmortem brain tissue found that the brains of people with autism seem to have more neurons than the brains of controls.

Those studies had serious limitations, however, including small numbers and the inclusion of few girls.