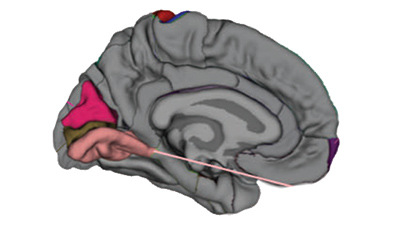 Faster, slower: The left cuneus (dark pink), a section of the cortex involved in visual processing, thins more quickly in adolescents with autism (blue) than in controls (red).

The cortex, the outer layer of the brain, grows rapidly in early childhood in people with autism and thins differently with age than it does in controls, two new studies report.

The first, a study of 157 people in Utah, found that the cortex thins more quickly in late childhood and adolescence and more slowly in adulthood in people with autism than in controls. The results were published 22 April in Brain1. This study traced changes in the thickness of the cortex in the same people over several years.

The second study, published 22 April in the Journal of Neural Transmission, found that the cortex in people with autism is thinner in some areas than it is in controls, and also has less surface area2.

“There is no such thing as an isolated brain region where people with autism are different,” says Christine Ecker, lead researcher on this study and lecturer in neuroimaging at King’s College London. “It’s really small differences that are all over the cortex.”

Together, the studies support the theory that the brain grows too quickly and shrinks too soon in people with autism.

Identifying patterns of thinning with brain imaging may help researchers find subgroups of autism that share common origins, says Antonio Hardan, professor of psychiatry and behavioral science at Stanford University in California, who was not involved in either study.

“If they have the same biologic underpinning, maybe they would respond to the same kind of biologic or behavioral treatment,” he says.

The Utah study is unusual in that it followed the same individuals over many years. The results allow a rare glimpse into the brain’s structure from childhood through adulthood, says Greg Wallace, assistant professor of speech and hearing sciences at George Washington University in Washington, D.C., who was not involved in either study.

The researchers scanned the brains of 97 males with autism, ranging in age from 3 to 36 years, and 60 controls between the ages of 4 and 39 years. They scanned these individuals once, twice or three times, waiting an average of 2.6 years between scans. In all, they generated 345 scans.

“That is hugely interesting and valuable to the literature and the knowledge base because it is longitudinal, which is very difficult and very expensive to do,” Wallace says.

The study included some participants with autism and intellectual disability who have an intelligence quotient (IQ) below 70 — a group often excluded from imaging studies because they can have trouble holding still.

The researchers controlled for intelligence, but they did not study the 15 individuals with low IQs separately because the group was too small. This is an important caveat, Wallace says, because IQ may alter the growth rate.

The researchers calculated the average thickness of 68 areas of the cortex and found that the cortex in the 3-year-olds with autism is thicker in parts than it is in controls of the same age. They found this to be the case in areas involved in decision-making, integrating sensory information and visual processing.

This suggests that the cortex had been growing more rapidly in the toddlers with autism before they reached that age, says lead researcher Brandon Zielinski, assistant professor of pediatric neurology at the University of Utah.

However, in early adulthood, this thinning slows down in people with autism so much that by age 45, their cortex is once again thicker than it is controls.

Some of the regions with unusual thickness or growth rates match certain brain networks, such as those associated with vision, speech and language and emotional control.

In the second study, Ecker and her colleagues examined both cortical thickness and surface area in 77 males with autism and 77 controls, ranging in age from 7 to 25 years.

Other studies have looked at the volume of the cortex in people with autism, but a different set of genes might influence the thickness and surface area of the cortex, Ecker says.

“This really adds to the growing body of literature that separates thickness from surface area,” Zielinski says. It may be important to consider both to piece together how autism develops, he says.

Like the Utah study, this work also found that at about 17 years of age, people with autism have a thinner cortex than controls do.

“Overall, there’s quite good agreement between the studies,” Ecker says. The results also support those from several other studies3, 4, 5.

However, a 2013 study by Wallace and his colleagues found no difference in surface area in 41 people with autism and 39 controls.

“That certainly could just be the fact that Ecker had a bigger sample,” Wallace says.  “They had more statistical power to detect more subtle effects.”

Both new studies have limitations, however. Both look only at males, and Ecker’s team did not include anyone with intellectual disability or epilepsy, or people taking antipsychotic medications, which means those with the most severe autism symptoms may have been excluded.