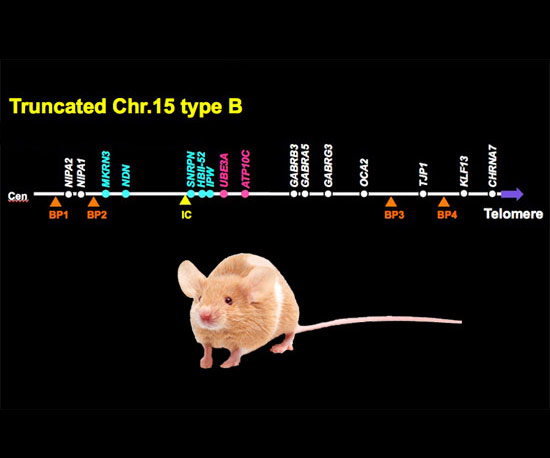 A new mouse model of 15q duplication syndrome, a genetic disorder associated with autism, falls short of recapitulating the symptoms of the syndrome. But it nonetheless points to a cluster of well-known risk genes as the most likely culprits.

Researchers presented details of the new model at the biannual meeting of the Dup15q Alliance in Philadelphia last week. The alliance was formerly known as IDEAS, a family support group for people with the disorder.

Researchers first linked the chromosomal region 15q11-13 to autism in 19911. In 1997, they found the duplication in two children with autism who inherited the duplication from their mothers. The study was the first to show parental origin for the duplication2.

Duplications in this region inherited from mothers are the most common genetic abnormality in autism, accounting for one to three percent of all cases of the disorder.

However, creating a mouse model for the duplication is challenging because the target region in humans is more than six million nucleotides long, and must stay intact during cell division in order to preserve its gene interactions.

In 2009, Japanese researchers announced that they had genetically engineered a mouse with a duplication in the region that shows many features of autism3.

In humans, duplication of the 15q11-13 region on the paternal allele does not usually produce features of autism, whereas a duplication transmitted from the mother does. In the mouse, that pattern is reversed, and the extra genetic material in that mouse is paternal in origin.

“The current mouse models do not completely mirror the duplications in humans,” says Carolyn Schanen, head of human genetics research at the A.I duPont Hospital for Children in Wilmington, Delaware, and co-chair of the Philadelphia meeting.

In the new study, researchers from Kanazawa University in Japan succeeded in transferring a big chunk of human chromosome 15 into the mouse genome, and made both a full-length and a truncated version of the region of interest.

“It was an interesting method of engineering and inserting whole chromosomes into the mouse,” says Matthew Anderson, assistant professor of neurology at Harvard University, who was not involved with the study.

In addition to autism, people with the syndrome have moderate to profound cognitive impairment, language and motor disabilities, poor muscle tone, slightly abnormal facial features, seizures and other symptoms.

The mice in the study do not show any of these features. However, they are hyperactive, running frenetically between the dark and light sides of their home cages, and unusually docile at night. They are fairly typical in terms of anxiety and social interaction.

“The mouse lacks any autism-related traits,” Anderson points out. Anderson is working on his own mouse model of the 15q duplication syndrome, and plans to present his findings in November at the Society for Neuroscience’s annual meeting in Washington, D.C.

Multiple genes in the region, working either singly or in combination, are thought to give rise to the disorder. Among the likely culprits is UBE3A, which helps maintain connections between neurons by pruning unnecessary ones.

Loss of the maternal copy of UBE3A causes Angelman syndrome, a developmental disorder characterized by arrested cognitive and language development.

ATP10 and GABRB3 are located near UBE3A and may also be involved in both Angelman and 15q duplication syndromes. All of these genes cluster between breakpoints 2 and 3 in the 15q11-13 region.

The stretch of chromosome 15 implicated in Angelman syndrome and 15q duplication syndrome is known to be heavily imprinted, meaning that copies of various genes are turned on or off on one of the two chromosomes in a highly choreographed manner.

That might help explain a puzzling finding in the new mouse. Researchers made mice with either maternal or paternal duplications of 15q11-13. But they found that the extra genetic material caused the maternal copy of the gene to “act like a paternal allele,” according to the mouse’s creator, Shin-ichi Horike, assistant professor of molecular biology at Kanazawa University.

The results produced a palpable disappointment among the researchers at the meeting.

“We don’t have a maternal duplication mouse here,” said Edwin Cook, Jr., director of the laboratory of developmental neuroscience at the University of Illinois at Chicago and co-chair of the meeting.

Still, other researchers at the meeting say that Horike’s mouse may prove useful even if it does not faithfully recapitulate the symptoms of the syndrome.

Any mouse model of 15q duplication that includes all of the relevant genes in the duplicated region and maintains imprinting for the region is a good model that can be used for molecular studies, says Lawrence Reiter, associate professor of neurology at the University of Tennessee Health Science Center.

Reiter has carried out phenotyping studies of individuals with the syndrome and found two who have paternal duplications.

Though they are imperfect, adds Schanen, the mice may “still be useful models to examine aspects of the phenotype arising from the chromosome 15 duplications.”