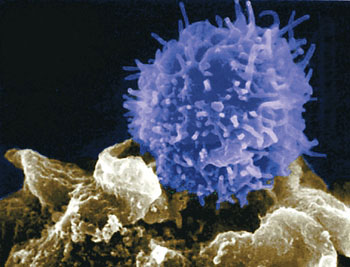 Pregnant mice injected with the immune protein interleukin-6 (IL-6) give birth to pups that are less social than normal, an effect that results from the over-activation of two pathways critical in neurodevelopment, researchers reported Tuesday at the Society for Neuroscience annual meeting in San Diego.

IL-6 is a cytokine — a molecule that helps the body mount an attack on pathogens. It has been found to be elevated in the brains of people with autism.

In the new study, researchers found that treating pregnant mice with IL-6 leads to markedly decreased social interactions in the offspring. They next used cultured neuronal stem cells to try and tease out the mechanisms by which IL-6 produces these effects.

Treatment with IL-6 increases the activity of two molecules — STAT3 and NOTCH1—critical to normal development. STAT3 stimulates the creation of both neurons and glia, and NOTCH1 helps maintain the pool of neural stem cells that give rise to them.

IL-6 also activates ADAM-10, a key enzyme involved in the NOTCH signaling pathway. ADAM-10 plays a central role in directing cells and axons — the finger-like neuronal projections that conduct electrical impulses away from the cell body — into place. It also has a protective effect in Alzheimer’s disease, helping to prevent amyloid plaque formation by cleaving the amyloid precursor protein.

“We are looking at ADAM-10 because it can cleave full-length NOTCH to yield active NOTCH,” says Ellisa Parker-Athill, a postdoctoral fellow in the laboratory of Jun Tan, professor of developmental neurobiology at the University of South Florida.

The lab has also been investigating the chemical properties of bioflavonoids — plant chemicals with anti-inflammatory properties, such as those found in green tea. The researchers have previously shown that the bioflavonoid diosmin blocks the STAT3 signaling pathway in cell culture.

When the researchers added diosmin to the diet of the IL-6 mice in the new study, Athill says, they saw a similar decrease in STAT3 activity, and an improvement in social behavior.