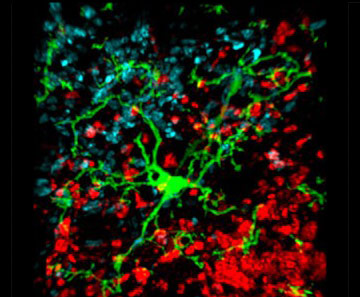 Cell shaping: Microglia (green), which are thought to go awry in individuals with autism, eliminate weak neuronal connections (blue and red) in the developing brain.

Immune cells called microglia may play a central role in trimming synapses, the connections between neurons, according to research published 24 May in Neuron1. These modifications are part of a normal developmental process by which excess synapses in the brain are destroyed.

Microglia are best known for their role as the brain’s garbage collector, scavenging dead cells, pathogens and other detritus from the diseased or injured brain. The brains of individuals with autism are thought to have too many of these cells2.

In a study presented last month at the International Meeting for Autism Research (IMFAR) in Toronto, researchers used a newly developed radiolabeling technique to show that there are more activated microglia in multiple brain regions in people with autism than there are in controls.

Although microglia have traditionally been thought to respond to disease or infection in the brain, a flurry of studies over the past couple of years have found that they are also present in their activated form in healthy brains. Imaging the cells in live brains has shown that the cells interact with neurons in a surprisingly dynamic manner3.

Stevens and her colleagues showed that during a period of intense pruning in the development of the visual system, microglia engulf parts of some synapses. The pattern of pruning depends on neuronal activity: Less active synapses are more likely to be eliminated.

“It’s a huge contribution to the physiological role of microglia in the healthy brain,” says Jonathan Kipnis, associate professor of cellular and molecular neuroimmunology at the University of Virginia, who was not involved in the study. “I think the paper shows convincingly that they are a major player and demonstrate how microglia maintain the brain on a minute-to-minute basis.”

Microglia are known to be in close contact with synapses in the visual system that are later pruned away, suggesting a role for the cells in pruning3.

To examine this process more directly, Stevens and her collaborators labeled the long neural wires that run from the retina to the lateral geniculate nucleus (LGN), the brain’s primary visual processing center, in mice engineered to have their microglia glow green.

This pathway has long been used as a model to study synaptic pruning because researchers can inject dye into the eye and trace where the neural projections go. Early in development, retinal cells reach out to the LGN and form myriad connections. Later on, they compete for territory, and the weaker synapses are trimmed away.

The immune system is known to play a role in this process, but the exact mechanism is not well understood.

In the new study, the researchers used confocal microscopy to analyze this visual pathway when mice were 5 days old, a period of intense pruning. They found chunks of labeled synapses inside the belly of the microglia, suggesting the cells had eaten the synapses. At 9 days old, when the dramatic pruning process had slowed down, microglial feasting slowed down as well — as evidenced by many fewer full microglia in the brain.

What’s more, when researchers labeled each eye with a different dye and triggered excess activity one eye, they found that microglia prefer the synapses coming from the less active eye.

“This is exciting as it provides further proof that microglia are not relegated to purely immune functions but are an integral part of normal brain machinery,” says Ania Majewska, assistant professor of neurology and anatomy at the University of Rochester, who was not involved in the study.

An immune molecule called complement 3 and its receptor, which Stevens and her collaborators had previously shown play a vital role in synaptic pruning4, are involved in microglia-mediated pruning as well. In the new study, they found that mice lacking either complement 3 or its receptor have a statistically significant decrease in their microglias’ capacity to engulf synapses.

One caveat of the research is that it’s not yet clear whether microglia initiate pruning, or merely arrive to clean up afterwards.

Imaging has shown microglia in contact with synapses and with chunks of synapses inside, but not the meal in progress. “It’s possible it’s a rapid process so we have to do a lot of imaging in order to see it,” says Stevens.

Tip of the iceberg:

They also plan to explore other roles microglia may play in both the healthy and disease brain. “Pruning is just the tip of the iceberg,” she says. “They are so dynamic and responsive to changes in the environment, you see them flying around the brain to get to where injury is.”

After a period of pruning of neuronal connections, chunks of synapses (red and blue) that have been eaten by a microglial cell (green) are seen inside the cell.

A number of studies suggest that microglia play a role in autism. For example, a 2011 study found that a network of genes involved in immune function, including those related to activated microglia, are more highly expressed in autism brains than in control brains.

“There is increasing excitement about microglial contributions to neurodevelopmental diseases such as autism given our expanding understanding of the role these cells play in the development of appropriate connections between neurons,” says Majewska.

Postmortem studies have shown that people with autism have more activated microglia in the brain compared with controls. Research presented last month at IMFAR confirmed that finding in the living human brain.

To examine microglia in the living brain, researchers in Japan developed the first radiotracer that binds specifically to activated microglia. The tracer is then detected using positron emission tomography (PET) imaging.

Preliminary results from 20 adults with autism and 20 controls show that the marker is found at significantly higher levels in multiple brain regions of people with autism than in controls, most prominently in the cerebellum and brainstem. It’s not yet clear whether this increase is a cause of the disorder or a secondary effect.

“The findings are valuable in defining regions at risk or regions with more susceptibility in autism,” says Carlos Pardo-Villamizar, associate professor of neurology and pathology at Johns Hopkins University in Baltimore, who was not involved in the research.

It would be especially helpful to examine what happens during early brain development, but it is ethically challenging to do that research in children, he says. The radiolabels used in PET scanning expose infants to as much radiation as a full-body computed tomography, or CT, scan.

In a tantalizing hint at potential therapies, replacing the bone marrow in mice engineered to model Rett syndrome, an inherited condition that shares some symptoms of autism, alleviates symptoms of the disorder5. Researchers say they believe the benefits come from populating the brain with new microglia.

“The microglia link to autism is still wide open,” says Stevens. “The big question is understanding mechanistically how they are playing a role.”