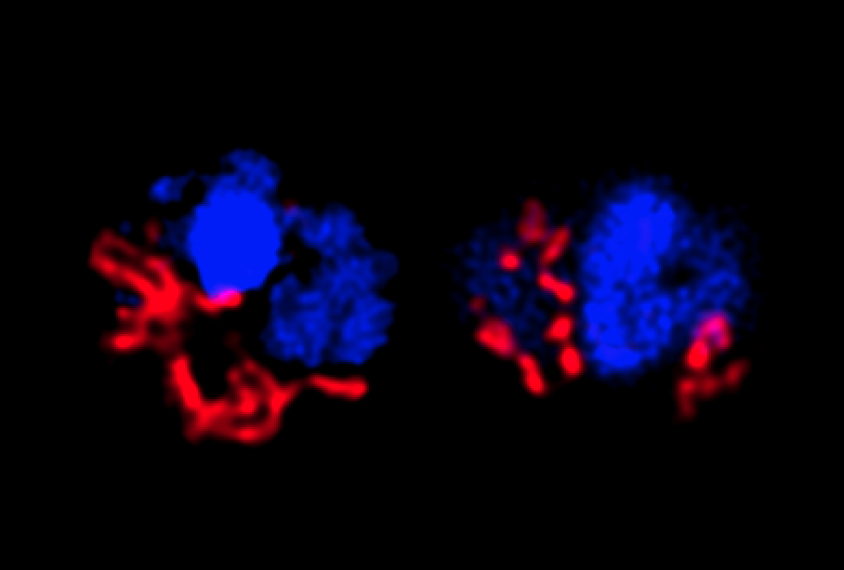 Short shrift: Mitochondria (red) in mice exposed to stress (right) are shorter than those in controls (left).

Some cases of anxiety, which often accompanies autism, may stem from a faulty immune system, according to a new study in mice1.

The findings are the latest in a wave of research into the provocative idea that immune cells influence the brain and behavior — and contribute to conditions such as autism and anxiety.

But several scientists have expressed caution, saying the immune effects on the brain and behavior reported in the study seem unlikely.

The study is notable for its range of experiments. It highlights immune cells called CD4+ T cells and overproduction of a molecule called xanthine as key to the immune system’s role in anxiety.

If the findings hold up in people, they could open up new avenues for treating anxiety.

Anxiety drugs typically act on the brain, but “maybe in the future we can target the CD4+ T cells or the immune system,” says lead investigator Jin Jin, professor of life sciences at Zhejiang University in Hangzhou, China.

The researchers used several techniques to trace immune cells’ effects on the brain.

“It’s a tour de force,” says Robert Naviaux, professor of genetics at the University of California, San Diego, who was not involved in the study. “It’s not that often that you see such a diverse set of methods all being applied to reveal different layers of a problem.”

However, other experts are skeptical of the proposed mechanisms.

“The findings are provocative but need replication,” says Miles Herkenham, chief of the Section on Functional Neuroanatomy at the National Institute of Mental Health in Bethesda, Maryland, who was not involved in the study. “I do support the notion that the immune system plays a role in [brain] function and [emotional] behavior, but I am hesitant to say that the mechanism proposed in this paper is the way it does so.”

Previous studies have found hints that T cells mediate the link between chronic stress and anxiety. But how T cells affect the brain remains a puzzle, as they do not come into contact with neurons.

Jin and his colleagues exposed mice to chronic stress by repeatedly shocking the animals’ feet over eight days. (Physical or mental stress increases the odds of depression and anxiety. It can also impair the function of the immune system and disrupt metabolism.)

Unlike controls, stressed mice stop venturing into the center of an open chamber, and they are reluctant to explore unfamiliar territory. Mice that have been physically restrained — another source of stress — also show these anxious behaviors.

Mice that lack T cells, however, do not become anxious after experiencing chronic stress. This suggests that the cells play a crucial role in anxiety.

Immune cells appear to retain a ‘memory’ of chronic stress, the researchers found. When the team transplanted the cells into mice that lack T cells, the animals began to show anxious behaviors. The results appeared in October in Cell.

“Somehow we never considered the immune system as a carrier or a driver of emotional life events,” says Fulvio D’Acquisto, professor of immunology at the University of Roehampton in London, who was not involved in the study. “This study pushes us towards this direction.”

However, the researchers found little variability in behavior among the mice in each group. Such highly consistent behavior is rarely seen in studies of mice and raises questions about the validity of the results, Herkenham says.

The researchers also found that chronic stress alters mitochondria — the energy factories of cells — in the mice’s T cells. The mitochondria are shorter and produce less energy than usual. The researchers saw similar changes to mitochondria in T cells from four people with anxiety. Stress also alters the expression of mitochondrial genes.

Mutant mice that lack one of these genes — MIGA2 — exclusively in T cells also have shortened mitochondria and anxious behaviors. The result suggests that these changes in T cells’ mitochondria somehow trigger anxiety.

The researchers found that xanthine — a chemical produced by mitochondria — seems to be key. Mutant mice, mice exposed to stress, and people with anxiety all show elevated blood levels of the molecule.

Together, the results suggest that stunted mitochondria and an overproduction of xanthine trigger anxiety in mice.

The brains of the mutant mice revealed clues about how xanthine might lead to anxiety. Surprisingly, only the left amygdala is enlarged in the mice. And it shows an unusual increase in the number of cells called oligodendrocytes that bind to xanthine.

Deleting the gene that encodes the binding receptor prevents anxiety in the mice.

“Somehow the xanthine specifically targets oligodendrocytes in the left amygdala, which is kind of curious,” says Anthony Filiano, assistant professor of neurosurgery at Duke University in Durham, North Carolina, who was not involved in the study. “Why the left amygdala, versus any other region in the brain?”

Xanthine binds to purinergic receptors, which are implicated in autism. Naviaux led a small 2017 trial that showed that a drug that blocks these receptors alleviates autism traits in boys on the spectrum. That drug has serious side effects, but the new study hints that it might be possible to develop more precise alternatives.

Jin says his team has unpublished results suggesting that only a subset of immune cells in anxious mice overproduce xanthine. They are working on strategies to block those cells using antibodies as a possible treatment for anxiety.