Playing with a child who has autism can be a strange experience, even for a parent. When a mother drives a toy car on the ground, the child picks it up and spins the wheels; when she bounces the ball to her son, he puts it on his head and rocks back and forth; when she presents him with a new toy, he turns away.

The odd behaviors of a child with autism hardly seem to be grist for therapy, but research has found that sessions of imitative play ― some only minutes long ― increase eye contact, verbalization and other measures of social responsiveness in the child1, 2,3.

Contingent play ― in which the adult responds to a childʼs action with a similar, but not the same, action ― does not have the same effect4,5.

“Being imitated by someone is an absolute attention getter,” says Michael Siller, assistant professor of psychology at Hunter College in New York. As part of a program designed to improve the play interactions of children with autism, Siller coaches parents to sometimes imitate their children.

“[Imitation] can create a moment of surprise for the kid,” Siller says, “and that may get him to look up and look at you and share his interest with you.”

Siller is investigating whether his program can improve language and communication skills in children with autism. In an earlier study, he found that when parents ‘synchronizeʼ their behaviors more to their child, and point to, show, or talk about something the child is already attending to, the children show improvements in language skills6.

The program also benefits parents, helping to tune them into their childʼs interests. For instance, parents set more realistic goals for a play session and learn to notice and appreciate the ways their child connects with them. “Very often parents run off in a direction and donʼt usually notice that they leave the kid behind,” says Siller. “Imitation is a very nice strategy for the parents to become aware of what the child likes, what he doesnʼt like, and the pace.”

Because getting the childʼs attention can be crucial to social interaction, even a brief glance at the parent can be meaningful.

“When you have attention,” says Sally Rogers, professor of psychiatry at the University of California at Davis, “you’ve got an engaged mind and you’ve got an opportunity to interact and teach something.”

Rogers uses this technique as part of a structured behavioral therapy for autism called the Denver model. In this model, therapists teach children with autism by building on a childʼs natural interests, which already hold their attention and motivation.

For instance, if learning body parts is in the lesson plan, then a teacher can elaborate on what the child is doing with a toy by trying to get the child to put the toy on his head or toe while naming the body part. “You have a chance to make what’s already a reinforcing activity even more interesting, which has a powerful effect on learning,” Rogers says. 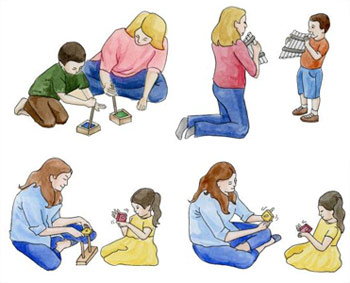 
Model behavior: In the Denver model, therapists teach children with autism by building on their natural interests.

The inspiration for imitation strategies comes from recognizing that imitation is a crucial part of social development, says Geraldine Dawson, chief science officer for the advocacy group Autism Speaks, and professor of psychiatry at the University of North Carolina in Chapel Hill. “In the 1980s we were just discovering that many children with autism donʼt imitate others,” Dawson says.

Dawson took a cue from research showing that infants notice when their parents imitate them even before they can begin to imitate others.

“I was interested in whether using this very early form of imitative play would help children with autism learn to imitate,” Dawson says. “I was surprised to see how much this technique improved eye contact and social engagement.”

Normal social exchange can be over-stimulating for a child with autism. Imitation makes the interaction highly predictable, putting the children in control of the stimulation they receive, she says. “This type of simple interaction provides a first building block for developing more complex interactions.”

Mirror neurons were originally discovered in monkeys, but a similar system has been identified in humans and is thought to mediate imitation of others and empathy, both foundations for social cognition7.

Located in two cortical areas, mirror neurons fire when someone makes a movement, such as picking up a cup, and while watching someone else make the same movement. The neurons are maximally activated when imitating someone else, which combines watching with doing.

But whether mirror neurons are also involved in noticing imitation is unclear.

Mirella Dapretto and her colleagues have found that mirror neuron areas are poorly activated when a person with autism watches and imitates the facial expressions of others8. This deficit could explain their difficulties with imitation and empathy.

Dapretto suggests that the mirror neuron system may function normally in autism when the tables are turned ― that is, when people with autism are being copied ― and perhaps underlie their ability to notice it.

Though sluggish when observing someone else, the mirror neuron system in a person with autism might be jump-started by his or her own movements. “If you start out with the kid performing a certain action, the whole system obviously is engaged,” says Dapretto, an associate professor of psychiatry at the University of California in Los Angeles.

In this case, performing an action may rev up the mirror neuron system enough to permit more normal activation when the child watches others imitate his or her actions. “Maybe thatʼs all it takes to bring the system online,” Dapretto says.