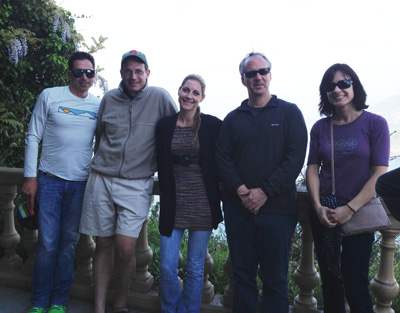 Lofty ideas: After the conference ended, researchers ventured up the hills of San Sebastián while mulling over all they’d heard.

On the final day of the 2013 International Meeting for Autism Research (IMFAR) in San Sebastián, Spain, the sun made a welcome appearance from behind the clouds. With it emerged one common theme from the many talks at the meeting: How do we define and categorize autism?

In conversations with some of the 1,700 researchers and clinicians gathered here over the past few days, several themes and open questions about autism arose.

Read some of their reactions here »

But the one that came up repeatedly is the idea of autism vs. ‘autisms’: the staggering variation in the underlying biology, behaviors and intellectual abilities of individuals with the disorder.

Christopher Gillberg set the tone early in the opening keynote address with a provocative warning against an ‘autism-only’ research approach. Gillberg argued that researchers need to reconcile autism’s genetic overlap and co-occurrence with other disorders, such as attention deficit hyperactivity disorder, Tourette syndrome and schizophrenia.

Current estimates hold that about 1,000 genes or more contribute to autism, and most of these are also implicated in other genetic diseases. In another keynote addressthe following morning, Daniel Geschwind quipped that if you show him 100 different people with autism, he could “show you exactly 100 different types of autism.”

Geschwind offered that one way to mitigate this heterogeneity is to identify convergent molecular pathways. For instance, cancer is a complicated disease with many types and causes, affecting different organs. But ultimately, all of its varieties can be characterized by an overgrowth of cells, which scientists can use as a common target for therapy.

Another solution to the complexity might be to dissolve discrete clinical categories altogether. In a Viewpoint published today, David Ledbetter proposes that disorders as seemingly disparate as intellectual disability, autism, epilepsy and schizophrenia should all be considered part of a continuum of developmental brain dysfunction.

Some of the attendees I spoke with during IMFAR suggested that wrestling with these constructs holds limited practical value in the clinic, and presents a semantic ‘fool’s errand.’

Still, how we ultimately define and categorize autism is bound to have critical implications for how scientists study and treat the disorder. As Kevin Pelphrey noted during the #IMFAR tweetup hosted by The Wall Street Journal, “It is critical to recognize the multiple causes to begin to develop personalized interventions.”

Later, Stephan Sanders, the exome-sequencing whiz and postdoctoral fellow at Matthew State’s lab at Yale University, told me that these sorts of considerations are vital for guiding research into autism’s causes and treatments.