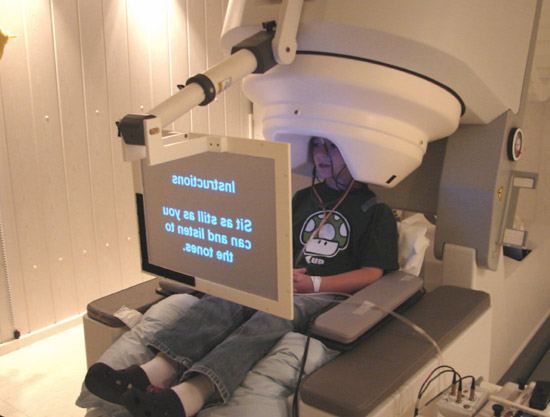 Children with autism have an imbalance of excitation and inhibition in the brain, according to the first study to measure synchrony between brain networks using magnetoencephalography (MEG). The findings were presented Wednesday at the Society for Neuroscience annual meeting in San Diego.

MEG is a non-invasive imaging technique that measures changes in magnetic fields created by firing neurons.

Many people with autism and related disorders have seizures. Others have speech problems and difficulty filtering sensory information. These behavioral observations, as well as animal and genetic studies, have led researchers to propose that the disorder arises from electrical signals gone haywire.

The new study is important because it “bridges the gap” between these molecular studies and live human brains, says Lauren Cornew, a postdoctoral fellow in Tim Roberts‘ lab at the Children’s Hospital of Philadelphia. “There is so much research being done on autism right now, which is amazing, but we need to link studies on the most basic molecular level to imaging findings in vivo,” Cornew says.

Several magnetic resonance imaging (MRI) studies in the past year have measured the activity of major circuits when the autistic brain is at rest.

In the new study, Roberts’ team measured brain activity in 22 children with high-functioning autism and 20 healthy controls while they sat for two minutes under the scanner with their eyes closed.

Children with autism have more brain waves that cycle 1 to 7 times per second (1 to 7 Hertz) in the front part of the temporal lobe, compared with controls. They also have more 8-to-12 Hertz waves in several regions in the back of the brain, and the extent of this difference correlates with the severity of the children’s symptoms of autism. “This suggests a possible resting-state biomarker for autism,” Cornew says.

Looking across the entire brain, children with autism have more super-fast (20-120 Hertz) brain waves, which have previously been linked to the disorder.

The researchers also collected structural MRI scans of the participants, which map the size of specific structures in fine detail. By merging this data with those from the MEG scanner, they can get a better estimate of the signals’ origin in the brain.

Cornew is most excited about the MEG technique because of its simplicity. “It means that our study is applicable to low-functioning children with autism who would not be capable of performing a task in the scanner, and also to much younger kids,” she says.