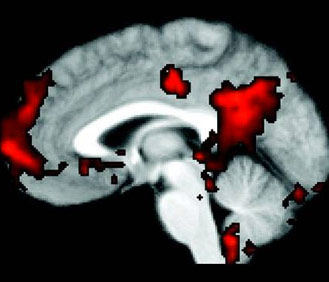 Resting activity: Functional connections within the default mode network, a brain circuit that is active (red) when an individual is idle, are weaker in people with autism than in controls.

Resting activity: Functional connections within the default mode network, a brain circuit that is active (red) when an individual is idle, are weaker in people with autism than in controls.

Three independent studies presented in May at the International Meeting for Autism Research (IMFAR) in Toronto suggest that much of the brain in people with autism looks the same as that of controls.

The results contradict the so-called connectivity theory of autism, which holds that the brains of people with the disorder have weak long-range functional connections compared with controls.

Comparing 28 children with autism and 28 controls, ages 8 to 17, the researchers also found that some regions in the sensory and motor networks have stronger functional connections in people with autism than in controls. But the majority of the brain showed no difference at all.

The results highlight how challenging it is to understand how the brains of people with autism differ from those of controls.

“It’s an overstatement in the broader literature to say autism is an underconnectivity disorder,” says Pelphrey, director of the Child Neuroscience Laboratory at Yale. “We could find very small specific differences, but overall the data look quite similar.”

The idea that people with autism have impaired long-range connections in the brain is intriguing because it could explain their problems with language and communication, complex tasks that require the integration of information from different brain regions.

The bulk of evidence for connectivity impairments in autism comes from task-related brain imaging, in which fMRI records brain activity as a participant performs a cognitive task while lying in the scanner.

As in resting-state analysis, researchers infer connectivity among brain regions by looking for those whose activity changes in tandem. (Sometimes, however, correlations in activity are merely the result of two regions responding to the same stimulus at the same time.)

The majority of these studies have found that in people with autism, long-range synchrony in the brain is disrupted, mostly between the frontal and parietal regions.

Resting-state analysis, by contrast, measures brain activity in the absence of any stimuli. The idea is to detect correlations that reflect real interactions between brain regions, rather than regions whose activity appears related as they independently respond to a given task at the same time.

This approach, which has focused largely on the default mode network, has also shown that the brains of people with autism show a lack of synchrony among different parts of the network.

However, in the past year, two studies have questioned these findings, suggesting that the results stem from an artifact.

Even minute head movements skew the results of functional connectivity studies, the studies found, making it appear as if those who move more while in the scanner, such as children and people with autism or other disorders, have weak long-range connections.

“Every time developmental data are presented now, someone asks whether motion was controlled for,” says Pelphrey.

A second study presented at IMFAR supports concerns over movement, finding little evidence for changes in functional connectivity in people with autism when head motion is taken into account.

Dan Kennedy, a postdoctoral researcher in Ralph Adolphs’ lab at the California Institute of Technology in Pasadena, analyzed 19 adults with high-functioning autism and 20 controls using resting-state fMRI. He and his colleagues found that the connectivity maps are strikingly similar in the two groups.

Kennedy then merged the two groups and compared connectivity in those with a lot of or little head motion. Those who move more appear to have connectivity patterns that resemble those previously reported in autism, even after running mathematical analyses designed to remove the effects of motion. “That might explain previous findings,” he says.

Kennedy told SFARI.org that other people at IMFAR had found similar results, but the negative results had been difficult to publish.

Pelphrey’s study controlled for motion by removing pairs of brain images that show that the head moved a significant distance between the images.

His study is unusual in that it has fairly large numbers for brain imaging and is focused on children with autism rather than on adults. (Children with autism can be especially difficult to scan because they tend to move.) In addition, the researchers looked at correlations across the entire cortex, rather than just the default mode network.

Pelphrey says his finding that the brains of autism are mostly similar to those of controls is robust. “We know it’s not just a null finding, because we could find very specific small differences,” he says.

However, some experts say research showing weak connections in autism brains will hold up to further scrutiny.

“Animal models support it, and the bulk of literature supports it,” says Susan Bookheimer, professor of cognitive neuroscience at the University of California, Los Angeles.

Marcel Just, director of the Center for Cognitive Brain Imaging at Carnegie Mellon University in Pittsburgh, Pennsylvania, attributes the disparate findings to the fact that researchers are intentionally measuring different aspects of brain activity.

Part of the debate rests on which type of brain activity researchers consider most important in assessing functional connectivity.

Just, for example, has focused on activity linked to cognitive processing, such as when the brain is focused on completing a language task.

“In my view, what is altered in autism is the coordination of information processing, such as occurs in language comprehension or social processing, among frontal and posterior centers of processing,” he says. “From this perspective, it makes no sense to filter out the frequencies that correspond to the cognitive processing, as some investigators do.”