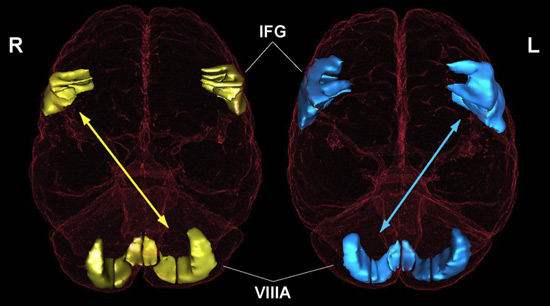 Asymmetrical speech: Brain regions important for language are significantly larger in the right hemisphere than in the left in boys with autism (left). The opposite is true in healthy controls (right).

Some brain areas involved in speech are larger and some smaller in children with autism compared with healthy controls, according to a series of imaging studies conducted by a Boston research group.

The findings could help scientists divide the diverse autism spectrum into subgroups and uncover molecular pathways involved in language ability in both verbal and non-verbal children with the disorder, says lead investigator Helen Tager-Flusberg, professor of anatomy, neurobiology and psychology at Boston University.

Language and communication problems are core deficits of autism but manifest in a variety of ways. Some children with the disorder continuously repeat words or develop an abnormally high-pitched, singsong or monotone voice1. A few children with high-functioning autism develop rich vocabularies, but as many as one in four will never use words, according to some estimates.

“Even within language, there’s quite a bit of heterogeneity,” says Don Rojas, associate professor of psychiatry and neuroscience at the University of Colorado Denver, who was not involved with the study. “One of the big pushes is to parse out people with autism into biologically meaningful subgroups.”

Dozens of imaging studies on children with autism have scanned brain regions that process language. When speaking or listening to words, healthy people usually show dominant activity in the left hemisphere. This pattern is diminished or reversed in individuals with autism, who show more activity in the right hemisphere2.

Few studies have investigated a link between hemisphere dominance and anatomical abnormalities in the brain, however.

In the February issue of Brain & Language3, Tager-Flusberg and colleagues report the results from functional magnetic resonance imaging (fMRI) of adolescent boys, 20 of them healthy and 14 with autism, to see whether their right or left hemispheres are more active during a language task.

The researchers asked participants which object or idea is defined by a given three-word phrase. For example, ‘keep hands warm’ describes ‘gloves.’ During this task, participants with autism show more right-hemisphere activation than do controls, echoing previous findings.

In both groups, the scientists found that boys with more active right hemispheres have more gray matter, meaning greater numbers of cell bodies, in frontal language areas of the brain compared with those areas in healthy controls.

These results are consistent with earlier studies of healthy people showing that language areas are larger on the side of the brain that is most active during verbal exercises4. Taken together, the findings support the notion that the connection between language dominance and brain anatomy is not specific to autism.

In fact, right-brain language dominance is not unique to autism, either. Researchers have seen it in people with general language impairments, schizophrenia, attention deficit hyperactivity disorder and even in healthy individuals.

Still, Rojas says that subgrouping children with autism on the basis of their brain structure and language abilities may help scientists better understand the genetic roots of the disorder.

For example, one study found that screening children with autism who also have speech delay turns up stronger genetic associations than does performing the same search on a more diverse group of children with the disorder5. “Many people think that this is the way to go in genetics,” he says.

The February study also looked at bundles of nerve fibers, or white matter, joining two language areas of the brain. Using diffusion tensor imaging, which lights up white matter, the researchers found that boys with more active right hemispheres have reduced connections between Broca’s area, a region toward the front of the brain that activates during speech production, and Wernicke’s area, an area in the back that is critical for understanding written and spoken language.

The findings bolster the ‘connectivity hypothesis’ of autism, which suggests that people with the disorder have structural and functional abnormalities in the connections between far-reaching brain regions6. When people with autism are engaged in language tasks, the front and back language regions of the brain are less synchronized than they are in healthy controls performing the same tasks.

Individuals with right-side dominance also show abnormally low connectivity, however, Rojas notes. “It’s not a finding specific to autism, but it is suggesting why you might have a tendency to see more language problems in an autism group than in a non-autism group.”

She plans to study larger numbers of children to better understand these complicated dynamics. “It would also be interesting to look at younger children and in the same children over time, and the relationship to language ability,” she says.

Her group has already discovered some age-related anatomical differences. Last year, the researchers compared children aged 7 to 11 years with those aged 12 to 19, both with and without autism diagnoses.

They found that for all ages, Broca’s area is larger in children with autism spectrum disorders compared with controls. This difference, which could stem from improper pruning of neurons, might explain why controls score higher on language tests, the researchers say7.

Gray matter volume is larger in both groups of older children compared with younger children, regardless of diagnosis, showing that the area develops with age.

“The fact that the brain is still so plastic in those areas says to me that [children with autism] probably do benefit from intensive language interventions through childhood and adolescence,” Tager-Flusberg says.

Tager-Flusberg is also studying the cerebellum, a brain region that controls motor movements. The cerebellum has also been implicated in language processing, memory and attention. Imaging and postmortem studies have linked the cerebellum to autism and related developmental disorders.

In a study published in the March issue of the Journal of Autism and Developmental Disorders8, Tager-Flusberg and colleagues measured cerebellar volumes of boys with autism ranging from 6 to 13 years old.

The group compared boys with autism to those with specific language impairment, a disorder in which children appear healthy but have a variety of linguistic deficits, such as not understanding complex words and sentences, or difficulties reading.

Regardless of a child’s diagnosis, the study showed that the smaller the vermis, the greater the deficits in language performance. Because previous results suggested that vermis size varies widely across children with autism9 — partly because of differences in their intelligence — it may be that the size of the brain area predicts language and intelligence capabilities more so than does the disorder itself, Tager-Flusberg says.

To better synthesize all of these findings, researchers will need to conduct studies in younger children, and in children with other language disorders, notes Anne Foundas, professor of neurology at Louisiana State University.

For example, she and her colleagues plan to use similar imaging methods to compare children with autism with those who have developmental stuttering to see how brain differences relate to language abilities.

Linking the results to genetic findings in autism is another important next step.

Tager-Flusberg’s group is planning to connect brain structure differences to variations in the CNTNAP2 gene, which several studies have linked to language impairments in autism.

“I’d love to be able to link it to gene findings,” Tager-Flusberg says. “But we simply don’t have those data yet.”