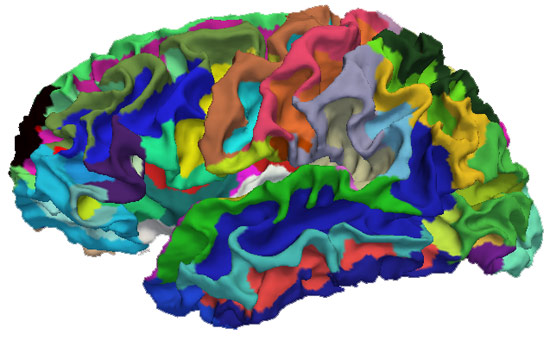 Mapping dimensions: Studies of schizophrenia and autism could use FreeSurfer to calculate both structure and volume of brain regions.

Computer software that maps the three dimensions of the brain has found that people with schizophrenia have deep grooves and small volumes in brain areas associated with planning and executive control.

The volume measurements of some areas seem to depend on the depth of nearby grooves. This unexpected finding could help explain the mixed results of previous studies measuring structural brain differences in people with schizophrenia and other psychiatric diseases, according to unpublished data presented today at the Society for Neuroscience meeting in Chicago.

The cortico-striatal-thalamic loop — a large brain circuit involved in planning and executive control — has been implicated in schizophrenia, obsessive-compulsive disorder and autism.

But studies looking at structural differences in the loop’s regions have found contradictory results.

For example, since 2001, 7 out of 10 structural magnetic resonance imaging (MRI) studies  looking at the size of the anterior cingulate gyrus (ACG) — a ridge on the cortex that feeds into the cortico-striatal-thalamic loop — in people with schizophrenia found a smaller volume when compared with controls; the other 3 did not find a decrease in volume.

Psychiatrist James Levitt measured the volume, thickness and surface area of two structures in the cingulate cortex — which includes the ACG and the paracingulate sulcus (PCS), a deep cortical groove — in 28 adults with chronic schizophrenia and 28 healthy controls.

Gyri and sulci, with their curved mounds and troughs, are extremely difficult to measure using manual tracings of two-dimensional brain slices, which are traditionally used in MRI studies. Levitt instead used FreeSurfer, a brain image processing software that automatically reconstructs a three-dimensional image of brain surfaces.

“The beauty of FreeSurfer is it lets you really look at the sulci in very elegant way,” says Levitt, an associate professor of psychiatry at Harvard Medical School. “You can contour surfaces and follow the deepest points along the sulcus, and really measure the length of the sulcus.”

Using FreeSurfer, Levitt found that 32 percent of people with schizophrenia in his study have an extremely deep PCS compared with just 11 percent of controls. What’s more, those in the schizophrenia group who have a deep PCS have a smaller ACG by volume — which could explain the conflicting results from previous studies.

Levitt suggests that future studies — not only of schizophrenia, but also of autism and other neuropsychiatric diseases — would gain a more complete picture by calculating both sulcal structure and volume. “Just getting a smaller volume, if you don’t actually know the sulcal pattern, can be misleading,” he says.