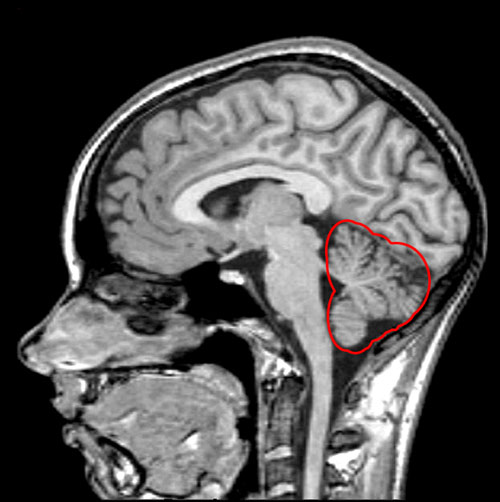 Cerebellar circuits: Structural changes in the cerebellum of people with autism suggest links to the default network.

Cerebellar circuits: Structural changes in the cerebellum of people with autism suggest links to the default network.

People with autism have structural changes in parts of the cerebellum that are distinct from those seen in individuals with attention deficit hyperactivity disorder (ADHD) or dyslexia, according to an unpublished meta-analysis presented at the 2011 Society for Neuroscience annual meeting in Washington, D.C.

Pinpointing the location of the alterations becomes more important as functional imaging studies begin to suggest that the different parts of the cerebellum have distinct functions.

For example, sensorimotor functions have been linked to the anterior lobe of the cerebellum, whereas particular locations in lobules VI and VII are involved in language, spatial skills or working memory1.

In the new analysis, researchers pooled data from 35 structural magnetic resonance imaging studies of people with autism, ADHD or dyslexia.

“Out of the entire brain, the most significant findings were in the cerebellum,” says Catherine Stoodley, assistant professor of psychology at American University in Washington, D.C., who presented the work.

The researchers found that people with any of the three disorders have less gray matter — which contains the cell bodies of neurons — in the cerebellum than controls do.

Where these gray matter differences manifest differs in each disorder, however. In people with autism, for example, gray matter volume is reduced in lobule IX of the cerebellum and, a preliminary analysis suggests, in right Crus I and left lobule VIIIB.

In those with ADHD, the gray matter deficit is seen in a different part of lobule IX, and in people with dyslexia, the decrease is in lobule VI.

”This is the first study to sublocate the different parts of the cerebellum and try to connect them with symptoms,” says Rick Lin, professor of neurobiology and anatomical sciences at the University of Mississippi Medical Center, who was not involved in the work.

The results “make sense in the context of which regions are being disrupted relative to the symptoms of each disorder,” Stoodley says.

For example, the gray matter deficits in people with ADHD are in areas associated with executive function, and people with dyslexia have abnormalities in language areas of the cerebellum.

The cerebellar abnormalities in autism may be linked to the default network, the brain regions that are active when a person is resting rather than performing a specific task. This circuit has been implicated in autism.

The findings will need to be confirmed with studies that are designed specifically to investigate these differences, Stoodley says.