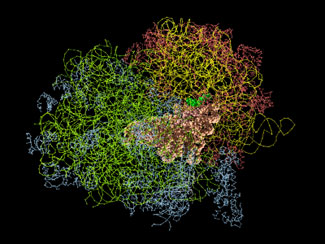 Cellular brake: The fragile X proteinFMRP binds to hundreds of RNA sequences, preventing cellular machines called ribosomes (above) from translating them into protein.

FMRP, the protein missing in fragile X syndrome, binds to the RNA sequences of 939 genes, 93 of which have been linked to autism, according to a study published 20 December in Nature1.

The hunt is far from over, however, not least because the new list of targets doesn’t match previous results.

FMRP is one of a couple thousand proteins that bind to strings of RNA and help translate them into protein. Identifying FMRP’s RNA targets may point to new treatments for both fragile X syndrome and for autism, researchers say.

Fragile X syndrome is the most common inherited form of intellectual disability, and about one-third of people with the syndrome show features of autism.

The Tuschl study is unique in that it pins down the precise sequences of RNA, or binding sites, at which FMRP connects. It turns out that FMRP is selective: It recognizes two short RNA sequences, each only four nucleotides long, according to the study.

“It has long been a problem to define the binding sites and the targets of FMRP,” Tuschl says. The Darnell study “could not give you the binding site, which makes you extremely suspicious of whether these are real targets or not.”

Other experts argue that there are several ways to define a valid RNA target, and that both studies have merit. The more important question, they say, is how to narrow down these long lists to find targets most relevant to neurodevelopmental disorders.

“Just because two molecules talk to each other in a cell, that doesn’t mean it’s an important interaction for brain function,” says Gary Bassell, professor of cell biology and neurology at Emory University in Atlanta, who was not involved in either study. “The challenge is to take all of this molecular biology data and say, which interactions are altered in fragile X and autism?”

The production of protein from DNA involves many steps. DNA is transcribed into messenger RNA in the nucleus. Then, outside of the nucleus, the floating RNA attaches to a molecular machine called the ribosome, which translates it into protein.

The Darnell paper revealed that in the normal mouse brain, FMRP binds to RNAs and stalls protein production by blocking the action of ribosomes. This presumably allows the RNA to travel down a long neuronal branch to the synapse, where one neuron makes contact with another. The RNA is then translated at synapses, instead of inside the cell body.

Identifying the RNAs that FMRP affects in this way is difficult, because many proteins bind to RNAs and many of them go after the same RNA sequences.

“The degree of competition with other binding proteins defines a good or not-so-good target for FMRP,” Tuschl says. “It makes that particular RNA more or less susceptible to the loss of FMRP.”

Tuschl’s team used a so-called ‘crosslinking’ technique in human embryonic cell lines. In this method, ultraviolet light freezes all RNA-FMRP interactions in place. The researchers then cut up the RNA-FMRP complexes into fragments and sequence them letter by letter.

The researchers found two RNA sequences, dubbed ‘RNA recognition elements,’ or RREs, that bind FMRP. About one-third of all RNAs have at least one RRE, and the strongest targets have many repeats of at least one RRE in their sequence.

The researchers ranked FMRP’s best targets according to their abundance and how stably their RNA binds to FMRP. One of the top five genes is mTOR, which is involved in protein production and has been tied to cancer.

Other studies, using a variety of approaches, have also linked the mTOR pathway to fragile X syndrome and autism. Following up on this lead, the researchers found that 20 other FMRP targets are also part of the mTOR pathway, including four known autism genes: TSC1, TSC2, PRKCB and PTEN.

“Here, in this unbiased screen, they uncover a link to this pathway that other labs have been studying,” Bassell says. “That’s really very satisfying.”

Along with the proteins encoded by the RNA targets identified, the RNAs themselves may prove to be useful drug targets. “There are a lot of promising RNA therapeutics out there,” notes Sabarinath Jayaseelan, a senior research scientist at the University of Albany who wrote a commentary about the new study3.

One caveat of the study, Jayaseelan says, is that the experiments were done in embryonic cells rather than brain cells. “It has to be taken with a grain of salt, because we don’t know what would happen in a neuronal environment.”

In an interesting twist, the researchers do know something about FMRP’s role in ovaries.

Although fragile X syndrome is a brain disorder, FMRP also affects other tissues, notably ovaries. Women with the syndrome are at an increased risk of premature ovarian insufficiency, a condition that causes menopause before age 40.

Tuschl’s team found that ovaries of mice lacking FMRP show an excess of mTOR and TSC2.

The data suggest that there are dozens or even hundreds of other such good leads, notes Manuel Ascano, the postdoctoral fellow in Tuschl’s lab who did the work. For example, other targets are part of the mGluR or ERK pathways, both of which have been linked to autism. “Now that we’ve narrowed down the gene space,” he says, “it doesn’t reduce the challenge but it gives it a better focus.”