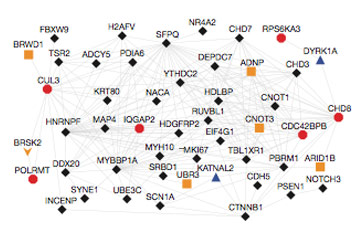 New network: Nearly 40 percent of the mutated genes identified in one exome sequencing study of autism are part of an interconnected network of interacting proteins.

The largest set of exome sequencing studies of children with autism and their families to date has identified a handful of genes that may increase risk of the disorder1,2,3. Such studies analyze the protein-coding region of the genome.

Three studies, published today in Nature, encompass more than 600 families and represent the first comprehensive search among children with autism for single-letter DNA mutations that are de novo, meaning that they occur spontaneously rather than being inherited from a parent.

Researchers found strong evidence linking six genes to autism, two of which had not been associated with the disorder before and two of which had only been weakly linked to sporadic, or non-inherited, autism. They also identified scores of candidate mutations to investigate in future studies.

“This is a landmark set of studies for the field,” says Patrick Sullivan, professor of genetics at the University of North Carolina School of Medicine, who was not involved in the studies. Sullivan notes that the design of the study — analyzing de novo mutations in families — is particularly important. “In one fell swoop they are taking us farther than any other studies in the past, in autism and in other psychiatric disorders.”

But perhaps the most significant result is the evidence of the enormous complexity of autism. Though the disorder is known to be highly genetic, only a small proportion of the overall genetic basis of autism has been identified. Taking into account the new findings, researchers estimate that about 400 to 1,000 genes are involved in the disorder. That means that even larger-scale studies are likely needed to identify all or most of the genetic risk factors.

“It’s very exciting but also very sobering,” says Aravinda Chakravarti, professor of medicine, pediatrics, and molecular biology and genetics at Johns Hopkins University School of Medicine in Baltimore, who was not involved in the studies.

Previous research on the genetics of autism has focused largely on searching for rare mutations in families with high rates of autism, common single-letter variations identified in genome-wide association studies, and copy number variations — deletions or duplications of stretches of DNA that can encompass multiple genes.

The new studies focus specifically on rare single-letter mutations, also called single nucleotide variations, or SNVs, that arise spontaneously in a parent’s sperm or egg cells. These de novo mutations can be identified by searching for genetic glitches that are present in children with autism but not in their parents.

Given the high rate of variation in the genomes of even healthy people, focusing on these rarer de novo mutations helps to narrow the list of candidates that actually raise risk of disease. The other benefit of identifying single-letter changes over copy number variations is that the latter often contain a number of genes, making it difficult to pinpoint the gene responsible for the variant’s effect.

“Getting to the resolution of a single gene is a really important step in being able to understand the specific pathological mechanisms underlying autism,” says Matthew State, professor of genetics and psychiatry at Yale School of Medicine.

Two of the studies, led by State and Evan Eichler, professor of genome sciences at the University of Washington, are based on data from the Simons Simplex Collection (SSC). The SSC contains genetic and other information, such as cognitive and behavioral data, from 2,700 families that have a single child with autism and unaffected parents and siblings, and is funded by the Simons Foundation, SFARI.org’s parent organization. They examined a total of 447 family trios — an affected child and unaffected parents — and 250 unaffected siblings.

The third study, headed by Mark Daly, associate professor of medicine at Harvard Medical School, sequenced exomes from 175 family trios that are part of the Autism Consortium in Boston. Unlike the SSC, this group includes families with a history of autism, but Daly says that 70 percent of the families in this cohort have no family history of the disorder.

Taken together, researchers sequenced the exomes of 622 family trios and 250 unaffected siblings.

Part of the rationale for sequencing the genomes of unaffected siblings is to get a better sense of the baseline mutation rate. “There is so much mutation in the genome, you really need to have data on what mutation looks like in well-matched unaffected people in order to have traction in what’s going on in affected people,” says State.

All of the studies used newer, cheaper sequencing technologies that have enabled a boom in exome and genome sequencing. “It’s the largest-scale application of next-generation sequencing for any complex trait that I know of in my field,” says Sullivan.

Each study identified a number of non-synonymous — meaning those that alter or truncate the structure of the gene — de novo mutations found only in individuals with autism. But determining which of those truly drives an increased risk of the disorder is no easy task.

“The bad news is there is heterogeneity out the ying-yang,” says Eichler.

Considering all the data together, researchers found 18 genes with de novo mutations, some of which have been previously linked to autism. Each of these genes was identified in two unrelated individuals with autism, but not in their unaffected family members. Three of these genes had two loss-of-function mutations, which provides stronger evidence linking them to autism, says State.

According to statistical calculations, two independent instances of a mutation make it much more likely the affected genes are linked to autism, but the association is still not definitive.

“Even when we put all of the mutations observed in the three studies together, we haven’t found any gene hit with more than two de novo mutations, so nothing stands out as a major cause of autism,” says Daly. “But we do see several genes hit twice and have a high degree of confidence these are genuine risk factors.”

Daly’s team took the top candidate genes from State and Eichler’s studies and searched a separate cohort of 935 people with autism and 870 controls for mutations in these genes only in people with autism. They found additional protein-altering mutations in KATNAL2 (katanin p60 subunit A-like 2) and CHD8, a chromatin remodeling factor, neither of which had been previously linked to autism.

Another candidate, SCN2A, a sodium channel gene that has previously been associated with familial autism and seizures, is mutated in two cases in State’s study. Joseph Buxbaum’s lab, part of Daly’s collaborative team, identified a third mutation in this gene in a person with autism while the papers were in press, “providing very strong evidence that this is an autism spectrum disorder risk gene,” says State.

“While the findings were not very rich in terms of the number of harmful variants found, it was clear that they converge on pathways that affect the brain and allow us to estimate the number of genes involved in autism,” says Thomas Lehner, chief of the genomics research branch at the National Institute of Mental Health, which funded some of the research. “For me these are the most exciting findings of the paper.”

The role of the other mutations identified in the studies is not yet clear, but State estimates that 14 percent of the autism group carries a de novo mutation linked to autism.

Adding this estimate to previous calculations that about 6 to 10 percent of people with autism carry de novo copy number variations, “we have now found in the Simons sample about 25 percent of likely genetic contributors,” State says.

He also estimates that once sequencing of the 2,700 families in the SSC is complete, researchers will identify on the order of 25 to 50 additional autism-linked genes. A third paper analyzing data from the SSC, from Michael Wigler’s group at Cold Spring Harbor Laboratory in New York, is now under review.

Despite the careful controls, it’s still unclear whether the findings will hold up to further scrutiny. “The question all three studies raise is are the mutations they found any more than we would expect by chance?” says Chakravarti. “We don’t know the background rates of mutation in the human genome, so we don’t know what would be surprising.”

The SSC studies tried to control for this by sequencing unaffected siblings as controls, but Chakravarti says even larger numbers are needed to get an accurate sense of both the rate and variability of de novo mutations.

In addition to looking for double hits to a single gene, researchers can try to determine the most likely candidate genes by looking for those that fall into specific molecular networks.

Eichler’s team found that nearly 40 percent of the genes they identified were part of a related molecular network. (Computational simulations showed that such a pattern was highly unlikely to occur by chance.) Researchers did not find a significant number of mutations in the genes in this pathway in 50 unaffected siblings, “confirming its relevance to autism,” says Eichler. “For me, that’s exciting.”

Some of the genes in the network, such as beta-catenin, which is important in early neurogenesis in the brain, have been previously implicated in autism, says Eichler. It also includes a number of genes that weren’t previously implicated but could become important, “such as chromodomain helicases, which are thought to be important in chromatin regulation,” he says. “I think it opens up an entirely new area for people to investigate.”

State’s study did not find this type of network, and Daly’s found some evidence of protein-protein interactions among candidate genes, highlighting how similar studies can come up with very different results.

“It’s interesting and highly provocative, but it’s hard to know how to take them to the bank,” says Sullivan.

Eichler’s group also looked at the parent of origin in a subset of cases in his study and found that de novo mutations are four times more likely to come from the father than the mother. That’s not surprising — sperm go through many more cell divisions than do eggs, providing more opportunities to make mistakes in replicating DNA — but the finding gives a more accurate number to biologists’ predictions, says Eichler.

In addition, the findings confirm that older fathers are likely to have higher rates of these mutations in their sperm, lending additional support to research that suggests an increased autism risk among children of older fathers.

All scientists interviewed agreed that the new research shows that even larger studies are needed to confirm and advance these results. “It’s a challenge to the field,” says Lehner.  “To get some traction on that problem, we need new forms of collaboration and new ways to find families.”

One such collaboration is the Autism Sequencing Consortium, a global consortium of scientists working to unravel the genetics of autism. The three Nature papers are the first publications to come out of the program, which encourages researchers to share data prior to publication.

The consortium is working on finding larger groups to study, including several thousand trios available to be analyzed in Europe.

“Only with large numbers will we get unequivocal evidence for key genes that are essential for us to move ahead with functional studies into the causes of autism,” says Daly.