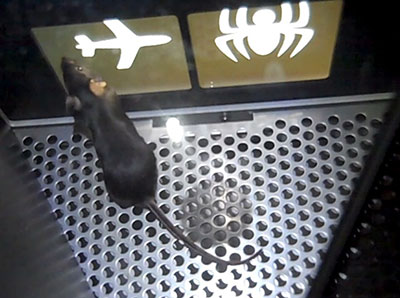 Tasty treat: Mice readily learn that touching the image of a spider, but not that of a plane, yields them a strawberry milkshake.

A new test of mouse intelligence closely mimics the types of assays used with people and detects a subtle learning deficit reminiscent of one seen in teenagers with autism, according to findings presented Saturday at the 2013 Society for Neuroscience annual meeting in San Diego.

The test in the first study could be used to screen for drugs that improve cognitive deficits associated with autism, says Jill Silverman, an assistant adjunct professor in Jacqueline Crawley’s lab at the University of California, Davis MIND Institute. Silverman presented the work at a poster session.

To measure learning in mice, researchers typically place them in a water maze, or see if they learn to anticipate an electric shock. “But you don’t shock people or put them in a pool to swim,” notes Silverman.

Silverman instead trained the mice in a human activity: using a touchscreen. In the most basic form of the test, the mice see two graphic images (such as a plane and a spider) and learn that they get “yummy” strawberry milkshake if they touch the spider, Silverman says. (She says she uses milkshakes because the mice work hard for them, even if they aren’t hungry.)

BTBR mice, which have many autism-like features, learn to go for the spider just as readily as control mice do. So Silverman made things much more complicated.

In the touchscreen task, if the mouse sees a spider and a plane, the spider yields a milkshake. But if it sees a plane and a star, the plane gives the reward — and so on for a total of four pairs.

The first image (a spider) always gives a reward and the last (say, a flower) never does. For the images in the middle of the series, each yields a milkshake some of the time, depending on the other image in the combination.

Discriminating the hierarchy of these middle images should be the most difficult, but both BTBR and control mice learn the combinations equally well.

In contrast, deciding between the spider (which always gives a milkshake) and the flower (which never does) should be easy and is for the controls. Surprisingly, however, BTBR mice often get it wrong.

Interestingly, in an almost identical study on adolescents, the participants with autism also struggled with distinguishing between the first and last images1.

“You don’t shock people or put them in a pool to swim.”

The researchers spent nearly two months teaching the mice to learn the various pairs, but this can probably be shortened to one month, says Silverman.

Stephen Smith, a researcher at the Mayo Clinic, says he was “amazed” the mice learned the task at all. “I remember seeing these chambers a few years ago and thinking the mice are not going to be capable of doing it,” he says.

The researchers intend to test other mouse models of autism, including those lacking the 16p11.2 chromosomal region and those that model fragile X syndrome. In people, fragile X syndrome causes severe intellectual disability, but the mouse model of the disorder shows few learning deficits, says Crawley. The new assay may reveal subtler problems with learning, she adds.

Another new mouse behavioral test presented Saturday also gets closer to the subtleties of an often crudely assayed behavior — in this case, mouse vocalizations. These vocalizations are in the ultrasonic range and are inaudible to the human ear.

Male mice tend to vocalize in the presence of females, but not when alone. To measure social interest, researchers catalog the number of these vocalizations and their characteristics — for example, whether the cry increases in pitch, which is referred to as an ‘upward’ call.

Missing you: Some strains of male mice make this particular cry when a female mouse they were interacting with is removed from the cage.

Mu Yang, assistant adjunct professor at the University of California, Davis made an unusual discovery. After removing the female mouse from a cage containing a male, she happened to glance back at the computer that shows the vocalizations.

“I swear this female is in my hand and the male is by himself, and I saw all these upward, upward, upward cries,” she recalls. It’s almost as if the males were saying, “Where did you go? Come back.”

To test this unexpected hypothesis, Yang designed an experiment in which a male mouse spends some time with a female, is later separated from her, and then reunited. She tested two relatively social mouse strains (B6 and FVB) and BTBR mice.

The social strains both tend to switch to upward cries when the female goes away, she found. In contrast, BTBR mice vocalize the same amount as the other strains at first, but don’t change the type of call when the female leaves. That may be because the BTBR mice do not have the same social drive to call for the female, or don’t notice that she’s missing, Yang says.

The researchers intend to continue to try to match mouse cries with behavior, to see whether they can piece together a ‘language’ of cries. They also plan to play the ‘come back’ call to female mice and see whether it elicits a response.