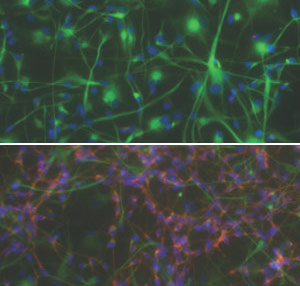 Growing up: Using the right combination of cues, immature cells (top) derived from fetal brain tissue can be coaxed to develop into mature neurons (bottom).

Growing up: Using the right combination of cues, immature cells (top) derived from fetal brain tissue can be coaxed to develop into mature neurons (bottom).

Simulating neuronal development in culture with cells derived from human brain tissue offers a new way to study the function of autism-linked genes, according to research published in the February issue of Molecular Psychiatry1.

The study, conducted by Daniel Geschwind’s team at the University of California, Los Angeles, represents a growing movement toward creating human-based models of early brain development. The researchers used human neural progenitor cells derived from fetal brain tissue to generate neurons. They then studied the expression of genes linked to autism as the cells developed into mature neurons over an eight-week period.

By grouping the genes into networks, or modules, based on when they are expressed together in culture, the researchers show that autism-related genes act early in brain development and tend to be closely connected to one another.

The researchers say the cells provide a way around some of the shortcomings of animal models. For example, they can be used to study the effects of simultaneous mutations in multiple genes, something that is challenging to do in animals.

Previous research suggests that some cases of autism may result from mutations in two or more genes, so having a method to study these interactions is especially important.

“I think as a strategy, it’s terrific,” says David Amaral, director of research at the University of California, Davis MIND Institute, who was not involved in the study. “It’s a human model system that allows you to probe how particular genes that have been implicated in neuropsychiatric disorders are regulated.”

Geschwind, professor of neurology and psychiatry, and his collaborators were especially interested in using their new model to investigate the role of neurexin-1 (NRXN1), a gene that is involved in the formation of synapses, the junctions between neurons, and has been linked to both autism and schizophrenia.

They found that the expression of NRXN1 increases after four weeks in culture, the point at which neurons begin to form, but levels of neurexin-3, a related gene, decrease. This is the first finding to suggest that these highly homologous genes may have opposite effects in the developing brain.

The researchers were able to confirm this expression pattern in fetal brain slices and in mouse brain data from the Allen Brain Atlas, which suggests that the expression pattern could be studied further using mouse models of human diseases, including autism.

“It was really nice to get in vivo confirmation of the data we were getting from the cells,” says Genevieve Konopka, assistant professor of neuroscience at the University of Texas Southwestern Medical Center in Dallas, and lead investigator of the study.

NRXN1 is also one of the more highly connected genes in the modules the authors created, suggesting that it acts in concert with other autism-related genes and may influence multiple molecular pathways that may contribute to the disease. Other highly connected autism candidate genes include SCN1A and SLC9A6.

Follow-up studies could help elucidate the precise functions of these gene networks. The researchers also plan to use the cells to track the expression patterns of new autism-related genes as they’re identified, says Konopka.

As cell culture techniques improve, the notion of recreating complex human disorders ‘in a dish’ is fast becoming a reality2.

Many researchers are using induced pluripotent stem (iPS) cells, usually obtained from skin samples, to generate human neurons in culture. This approach has some advantages: The cells are easy to obtain and can be linked to specific patients, which makes it easier for researchers to relate results back to disease phenotypes.

But others are concerned that the multiple reprogramming steps necessary to create iPS cells and differentiate them into mature neurons may ultimately create neurons that are genetically different from those in the brain.

In contrast to iPS cells, neural progenitor cells are obtained from human brain tissue and don’t have to be reprogrammed, so they allow researchers to more closely model the development process as it occurs in nature.

The progenitor cells used in this study are easy to work with, says Konopka, and are more developed than stem cells, so they differentiate into neurons in weeks instead of months. But they are more difficult to obtain than iPS cells. They are isolated from aborted fetuses, which is technically challenging and may be ethically controversial for some researchers.

There is also no way to specify what brain areas the cells come from. Geschwind and Konopka found that the cells differentiate into numerous neuronal subtypes, however, including those of the frontal cortex, which is of particular interest to autism researchers.

Their study focused on autism-related genes, but the approach could be readily adapted to study gene variants associated with other neurodevelopmental disorders, such as epilepsy and schizophrenia.

The more general approach could also be used to complement animal models and iPS cell studies of autism, which allow researchers to study specific behavioral and clinical phenotypes. For example, researchers could use the neural progenitor model to determine where and when a gene of interest is normally expressed during development, then look for abnormalities in that gene in neurons derived from iPS cells taken from individuals with autism.

“As far as I’m concerned, the more models we have, the better,” says James Ellis, senior scientist at the University of Toronto’s Hospital for Sick Children, who has used iPS cells to model Rett syndrome in culture3.

Konopka is also interested in using the neural progenitor model system to investigate treatments for autism. “It’s a really nice system for manipulating genes,” she says.