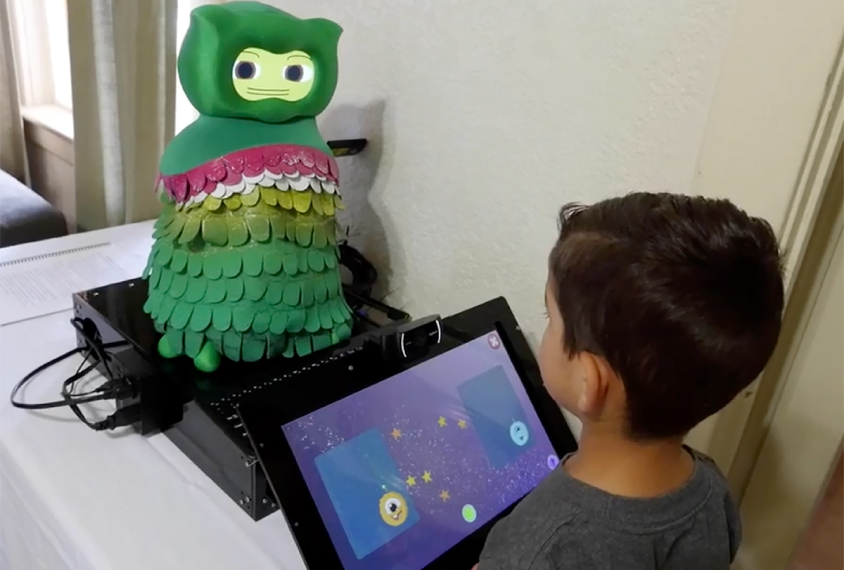 Try, robot: With machine learning, a robot can improve an autistic child’s attention to a game.

From identifying a new antibiotic to generating the first-ever image of a black hole, machine learning is changing how scientists approach questions in many fields. Autism researchers are being equally creative, using machine-learning methods to improve diagnosis, classify the condition into subtypes and provide support for people on the spectrum.

One of the most common applications of machine learning is in making predictions: where and when a hurricane will make landfall, for example, or what the next word in a person’s text message might be. One team has applied similar methods to predict which newborns would later be diagnosed with autism1.

The researchers studied the medical records of the parents of nearly 100,000 children born in Israel from 1997 to 2008. About 1,400 of the children went on to be diagnosed with autism.

Using a variety of machine-learning techniques, they analyzed the parents’ age, socioeconomic status and medications.

The algorithms successfully predicted about one-third of the children’s autism diagnoses. The predictions were strongest when the researchers combined data from both of a child’s parents, rather than from only one parent. The team published their findings in February in European Psychiatry.

Predictive algorithms could also be useful for identifying factors that may contribute to autism. For example, the algorithms found an association between autism and the parents’ use of substances such as caffeine and certain antidepressants. Previous research on such drugs’ contribution to autism is mixed.

Machine learning may also help researchers better understand why autism’s traits vary in their nature and severity from person to person.

Researchers used machine learning to analyze brain scans and clinical information, such as age of onset and medication use, for 671 people, 307 of whom had been diagnosed with schizophrenia2.

The team used their algorithm to identify two subgroups of schizophrenia based on distinct patterns in brain anatomy. They published their work in February in Brain.

One of the subtypes shows largely normal brain volume with increases in two areas, challenging previous ideas that schizophrenia is linked to diminished brain volume.

Similar methods are already being used in autism research. A 2019 machine-learning study analyzed behavioral data and found two overarching behavioral profiles of autism, each with its own subgroups based on the severity of different traits3.

Another research team has created machine-learning algorithms that could help robots understand when an autistic child needs help4.

At the end of the month, the researchers analyzed the audio and video, along with the children’s scores on the game, and then trained a machine-learning algorithm to recognize when the children are paying attention. They created individual models for each child’s data, as well as general models using many children’s actions.

The models accurately identified whether a child was engaged about 90 percent of the time. They missed instances of disengagement — when a child played with a toy or left the room, for example — about half the time. The work was published in February in Science Robotics.

The team then looked at whether Kiwi’s encouragement altered the children’s attention to the game. When Kiwi had spoken within the previous minute, children paid attention about 70 percent of the time, compared with less than 50 percent when Kiwi had been quiet.

Improved machine-learning methods could help Kiwi better adapt to a child’s behavior and know when to provide encouragement, the researchers say.