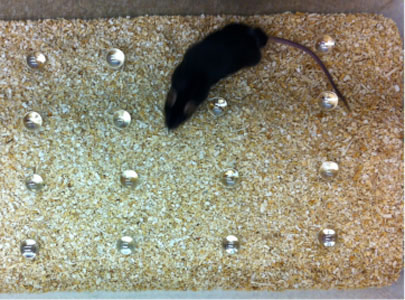 In 2011, Cristina Alberini of New York University and her colleagues showed that injecting IGF2 into rat brains enhances the rats’ memory1. The researchers were interested in the compound’s effects in BTBR mice because its sister compound, insulin-like growth factor 1 (IGF1), has repeatedly been linked to autism.

IGF1 partially restores deficits in a mouse model of Rett syndrome, for example, and is being tested as a treatment for girls with the autism-related syndrome. The hormone also reverses defects at the synapse, or junction between neurons, in mouse models lacking the autism-linked SHANK3 gene. It is being tested for individuals with Phelan-McDermid syndrome, who lack SHANK3.

But Alberini’s work is the first to look at the link between IGF2 and autism. The researchers chose the BTBR model of autism because the animals have more dramatic social and communicative abnormalities than other models.

They gave the mice a systemic dose of IGF2 and about 20 minutes later tested their social behaviors. In one test, a mouse is presented with a novel mouse on one side of the cage and a novel object on the other.

Unlike normal mice, BTBR mice show no preference for spending time with the mouse versus the object. But when treated first with IGF2, “we see a complete reversal of those deficits,” says Sarah Stern, a graduate student in Alberini’s lab who presented the work.

The researchers also placed the animals in a cage with marbles. BTBR mice are marble-burying fiends, which researchers say is akin to the repetitive behaviors seen in some individuals with autism. BTBR mice treated with IGF2 spend significantly less time burying, though the behavior “doesn’t quite go down to normal,” Stern says.

Finally, the researchers tested the animals’ ability to retain a fear memory of being shocked in a particular cage. IGF2-treated BTBR mice have better memory retention than untreated animals, the study found.

Unlike IGF1, which has been approved to treat short stature, IGF2 has not been approved for human testing. In normal mice, however, it seems to be safe: It doesn’t affect anxiety, locomotion or motor reflexes. “We never see any adverse effect,” Stern says.

The downside of the BTBR model is that no one knows the genes that may be driving the autism-like behaviors. That’s why the researchers plan to test IGF2 on genetic mouse models, such as those modeling Rett syndrome and UBE3A duplications, which cause another autism-related disorder, Stern says.