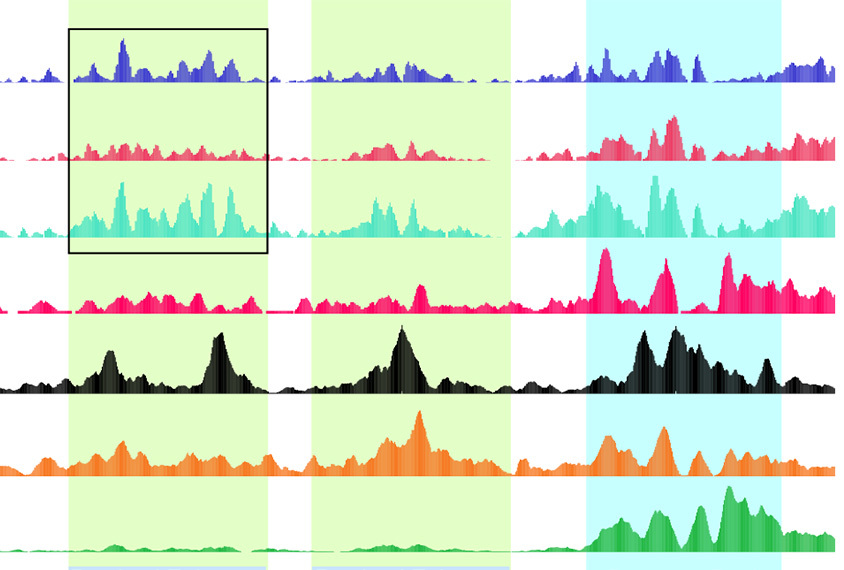 High marks: Levels of a histone mark in a segment of DNA that regulates a gene's expression (black box) are reduced in SHANK3 mice (middle row) compared with wildtype mice (top row) but normalize after treatment with a drug (bottom row).

Inhibiting the activity of an enzyme that changes the chemicals attached to histones — proteins that entwine with DNA to form chromatin — reverses social difficulties and repetitive behaviors in mouse models of autism, according to a new study. The findings highlight the role that histone modifiers play in autism and their potential as therapeutic targets, researchers say.

When chemical tags, such as acetyl or methyl groups, glom on to the DNA or histones in chromatin, it can shield individual genes from or expose them to the cellular machinery needed to read them. These epigenetic changes help control gene expression without affecting the underlying DNA sequence.

Patterns of some histone tags differ between brain tissue from people with autism and tissue from controls, studies show. And genes encoding enzymes that add or remove chemical tags from histones also feature prominently among the genes most confidently linked to autism, says Zhen Yan, professor of physiology and neuroscience at the University at Buffalo in New York, who led the new work.

A cancer drug that blocks enzymes that remove acetyl groups from histones increases social behavior in mice missing part of SHANK3, Yan and her colleagues reported in 2018. The following year, the team noted similar improvements after treating SHANK3 mice with a compound that inhibits two enzymes that add methyl groups to histones.

In the new work, Yan and her colleagues focused on a different enzyme, LSD1, that removes methyl groups from histones. Blocking the enzyme in SHANK3 mice by using an experimental compound called GSK-LSD1 not only increases the animals’ social behavior but also reduces their excessive grooming, a behavior reminiscent of repetitive behaviors in autism. “This is the only epigenetic drug we found that can rescue two major types of autism phenotypes,” Yan says. The results were published in March in Molecular Psychiatry.

The research presents an initial step toward an epigenetic treatment for autism, says Cesar Canales, a postdoctoral researcher in Alex Nord’s lab at the University of California, Davis, who was not involved in the work. “We know that an important number of autism cases stem from epigenetic causes,” he says.

Compared with non-autistic people, those with the condition have lower levels of H3K4me2, a histone mark regulated by LSD1 and associated with gene activation, in the prefrontal cortex, Yan and her colleagues found in an analysis of 24 postmortem tissue samples. Brain tissue from SHANK3 mice, too, had reduced levels of H3K4me2 in the prefrontal cortex, a region important for social interactions.

Injecting the mice, aged 5 to 6 weeks, with GSK-LSD1 once daily for three days normalized H3K4me2 levels. Treated mice also spent more time with another mouse and less time grooming than untreated mice, with those improvements persisting for roughly 8 and 21 days, respectively. The drug did not improve the animals’ motor abilities or anxiety-like behaviors, however.

The treatment has the same effect in another strain of mice that carries a different SHANK3 mutation, the researchers found. It also boosts social behaviors in mice missing a copy of CUL3, another gene linked to autism, suggesting that the approach may be widely applicable, Yan says.

GSK-LSD1 restored dampened excitatory signals between neurons, according to electrophysiological recordings from brain slices from one strain of SHANK3 mice. It also altered the expression of a flurry of genes. Of 544 genes that are downregulated in SHANK3 mice, for example, 93 were significantly upregulated after treatment. Many of these genes are involved in development, learning and neuronal signaling.

The findings are interesting, but altering the activity of LSD1 could come with serious side effects, says Margarita Behrens, associate research professor at the Salk Institute in San Diego, California, who was not involved in the research. “You are dealing with a very fundamental chromatin system that is present and active in every single cell of your body,” she says.

Many questions about the treatment remain, Yan says, but studying enzymes that modify histones may uncover other molecular targets for autism therapies. One of the genes with the largest rise in expression in mice treated with GSK-LSD1 is EGR1, which is involved in the neuronal process that underlies learning and memory. The gene’s expression is also reduced in brain tissue from people with autism, the researchers found, and overexpressing it in SHANK3 mice boosted their social behavior.

That gene may offer another avenue for intervention, and one with more targeted effects, Yan says.