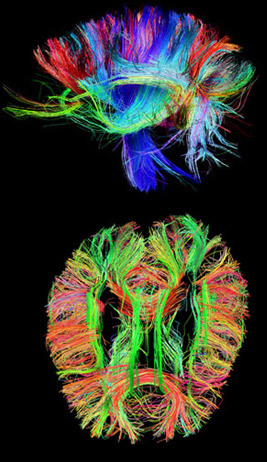 Over the next five years, dozens of researchers funded by the $40 million ‘NIH Human Connectome Project‘ will map the circuits of the human brain, tracing neural pathways and learning how different regions work together in synchrony.

Investigators plan to use the latest imaging technologies, including powerful custom-built scanners, to study the brains of 1,200 healthy adults. They aim to not only map the brain’s myriad connections, but also connect this complex circuitry to function and behavior.

“The way one part of the brain talks to another part is crucial to how the brain functions — or how it doesn’t function,” notes Michael Huerta, director of the project and associate director of the National Institute of Mental Health (NIH). Some theories say that autism, for example, is caused by weak long-range connections.

Although previous work has looked at brain connectivity in worms, zebrafish and mice, Huerta adds, “what we’re doing now is a tour de force on human subjects.”

The researchers plan to integrate data from the brain scans, as well as from genetic screens and medical histories, into a free and easy-to-browse database for scientists. The collection will be huge: more than one petabyte, or one quadrillion bytes, of data.

The first two years of the project focuses on building customized scanners and computer networks, as well as organizing the recruitment of participants. The researchers aim to begin collecting data in 2012.

One team, led by scientists from Washington University in St. Louis and the University of Minnesota Twin Cities, received $30 million to perform several types of brain scans of 300 families of adult twins and their siblings. The researchers plan to also collect blood samples for genetic analysis from this group and conduct a battery of behavioral tests — measuring, among many other things, balance, memory, mood, reading skills and vision.

The brain scans include two non-invasive methods that measure millisecond-to-millisecond changes in brain activity: electroencephalography (EEG) — which measures electrical brain waves through the scalp — and its magnetic-field equivalent, magnetoencephalography (MEG).

Although EEG and MEG have super-fine temporal resolution, these methods cannot pinpoint brain activity to specific regions of the brain. For images with high spatial resolution, the researchers plan to depend on functional magnetic resonance imaging (fMRI), which uses a powerful magnetic field to capture changes in blood flow from second to second.

In addition to the typical fMRI experiments — which focus on specific brain regions after a participant performs a particular task, such as pressing a button or listening to a word being said — the researchers also aim to do resting-state fMRI scans, in which participants lie quietly in the scanner for five to ten minutes. These spontaneous brain patterns show how different parts of the brain are coupled in time.

The MRI experiments will rely on two custom-designed scanners that have magnetic fields of different strengths: one with a standard 3-Tesla field (equivalent to about 3,000 refrigerator magnets), and another of 7-Tesla.

Brain imaging is always plagued by ‘noise’ — random signals that crop up along with the stronger activity that corresponds to a specific task. The stronger the magnetic field, the better the signal-to-noise ratio. The 7-Tesla scanner also has better spatial resolution than lower-powered machines do.

“High field images are much more sensitive and much more accurate,” says Kamil Ugurbil, professor of radiology and neuroscience at the University of Minnesota. His team is in charge of building the MRI hardware for the Connectome Project. They are also working on building a 10.5-Tesla machine from scratch — which, when finished, will be the most powerful in the world — and plan to scan some of the Connectome Project’s participants on that machine.

A second consortium of scientists from the University of California, Los Angeles, and Massachusetts General Hospital has received $8.5 million for high-resolution ‘diffusion MRI’ scans on some of the same participants. This technique images bundles of axons — the ‘white matter’ that conducts electrical signals — by taking advantage of the fact that these branches are covered in sheaths made of fat and water.

“The water molecules preferentially orient along the direction the fibers are going,” explains team head Arthur Toga, professor of neurology at the University of California, Los Angeles. Toga’s team is tweaking older diffusion imaging techniques to map the brain in unprecedented resolution and in three dimensions.

Perhaps the most exciting aspect of the Human Connectome Project is not in any one of these high-tech methods, however, but in the power to compare all of them across the same set of participants.

But, Toga points out, this comes with an enormous analytical challenge: “How can you turn these data into something that’s usable to a large majority of scientists?”

For the next two years, bioinformatics experts at several sites will focus on designing statistically rigorous methods of integrating and visualizing the massive amount of data. The researchers must also figure out how to build the collections so that more information — such as brain scans from healthy children, or from people with various brain disorders — can be added later on.

For example, the informatics platform could be later integrated with the Allen Mouse Brain Atlas — an online, interactive database of gene expression in the mouse brain — or the National Database for Autism Research, a tool for autism researchers to share genetic, imaging and behavioral data.

The scientists estimate that, all told, they will amass more than one quadrillion bytes of data. “That’s not the biggest dataset in the world, but we would contend that it’s one of the most complicated because of this diversity of modalities and analysis techniques,” notes David Van Essen, head of neurobiology at Washington University. “We have an enormous but very exciting challenge to present these data in a way that can facilitate deep and diverse types of data mining.”