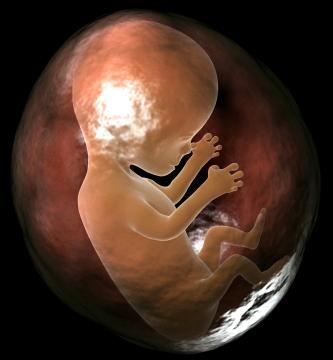 Extreme male brain: Could high levels of male sex hormones in the womb explain the ‘systemizing’ behavior seen in those with autism?

In the past few years, studies have linked various chromosomal regions, candidate genes and copy number variations to a higher risk of autism. But none of those findings explain why the condition is four times more common in boys than in girls.

That question has been the focus of psychologist Simon Baron-Cohen and his colleagues at Cambridge University.

Based on dozens of studies exploring sex differences in autism-related behaviors, Baron-Cohen has proposed a ‘fetal androgen theoryʼ: behaviors seen in autism are an exaggeration of normal differences between males and females, probably caused by exposure to high levels of male sex hormones in the womb1.

Since 2001, the group has found, among other things, that high levels of fetal testosterone ― in both boys and girls ― predicts poor eye contact2, poor social relationships3 and a lack of empathy4.

Last June, the researchers reported that the more testosterone a pregnant woman’s amniotic fluid contains, the higher her child will score on tests of autistic traits5. The following month, they reported that 5-year-old girls with autism prefer ‘boy-likeʼ play, such as wrestling or playing with toy trucks6.

“We’ve consistently found that the higher your level [of fetal testosterone], the worse your social skills and the slower your language development ― and that’s true at each of the developmental time points,” says psychologist Baron-Cohen, director of the Autism Research Centre at Cambridge.

Because Baron-Cohen has found no direct biological or genetic evidence of this proposed mechanism, and no other groups have tried to replicate his work, however, the fetal androgen theory has few supporters.

“To summarize the whole literature, we have a lot of ideas but not a lot of proof,” says Christopher Coe, who studies fetal brain development of non-human primates at the University of Wisconsin. “Itʼs not at all proven that androgen plays a major role in autism.”

Others say Baron-Cohenʼs model doesnʼt include enough of a role for genetics.

“Androgenization might very well make males more vulnerable to express autistic traits,” says David Skuse, a child psychiatrist at University College London. “But the idea that thereʼs some sort of dose-response relationship, as though genes didnʼt have anything to do with it, seems to me implausible.”

“We still need to know a lot more about the interactions between these male hormones and the specific genes that we think might predispose toward autism,” Skuse adds.

About eight weeks after conception, testosterone is produced in the testes of a male fetus or the ovaries of a female fetus, and then travels through the bloodstream to the brain. Compared with females, males produce vastly more testosterone, which triggers a cascade of reactions that culminate in the masculinization of genital tissue and of the developing nervous system.

Most mammals show marked sex differences in brain structure. For instance, experts can distinguish between male and female rat brains with the naked eye because of huge size differences in the hypothalamus.

But humans show more individual variation. The few differences in brain structure between men and women that scientists have identified have been small and of unknown function.

However, highly controversial psychological studies have suggested that men tend to score higher on tests of spatial reasoning and mathematics, for example, whereas women score better on tests of writing and verbal skill.

Children with autism, who tend to be good at following established rules and poor at understanding othersʼ emotions, have an “extreme male brain”, Baron-Cohen suggests. “These kind of psychological patterns persuaded us to start looking for a biological influence that might be affecting sex-linked characteristics.”

The link between elevated prenatal testosterone and autism dates back to a theory proposed by neurologist Norman Geschwind in the mid-1980s7. During development, Geschwind proposed, circulating testosterone in males stimulates growth of certain areas of the right hemisphere while inhibiting growth of the same regions in the left hemisphere, where most language processing occurs.

His hypothesis was based on findings that children with autism are overwhelmingly male and also have unusually high rates of left or ambi-handedness: 62 percent, compared with 37 percent in controls, according to one 1983 study8. People who are left-handed are more likely to show activity in their right hemisphere over their left.

“His theory is built on a few facts, and it does fit with the prevalence of the illness in boys and girls, but after that, a lot of it is speculation,” says Coe.

At the time, there was no way to test Geschwindʼs theory. By the late 1990s, however, amniocentesis ― a medical procedure in which fetal fluid is extracted from a pregnant woman to check for chromosomal abnormalities in the baby ― had become a routine procedure for pregnant women over 35.

Beginning in 1998, Baron-Cohenʼs lab began collecting amniotic fluid samples from a local hospital; his lab holds more than 500 such samples. In the June study, which is based on those samples, he found that in both boys and girls, children who were exposed to higher levels of testosterone score higher on two tests of autistic traits5.

Skuse, however, is skeptical about the reliability of these two tests. The details of one of the tests have not yet been published. Skuse says the other test “has face validity, but [Baron-Cohen] claims these absurdly high sensitivities and specificities for it.”

Even if the tests were accurate measures, Skuse says, there is unlikely to be a direct relationship between fetal testosterone and the number of autistic traits. “[Baron-Cohenʼs] view is that androgenization increases risk, presumably above any other risk,” he says. “But the thing that makes you autistic is your genetic inheritance.”

Skuse instead leans toward a different explanation for autismʼs highly skewed sex ratio: the X chromosome.

The latest genetic studies on copy number variations in autism have not found any significant differences in boys and girls, Skuse notes. Females are thus exposed to the same set of genetic risk factors as boys, but somehow fail to develop symptoms of autism.

“Itʼs very likely that what happens in females is the possession of a second X chromosome gives them some protection, an ability to compensate for whatever risk theyʼve inherited,” Skuse says.

His theory is supported by his studies showing that girls with Turner syndrome ― a genetic disease in which girls are born with a single X chromosome ― who are much more likely to show autistic traits than normal girls.

“They have normal IQs, and characteristic social impairments, and theyʼre not exposed to more fetal testosterone,” Skuse says. “This has to be explained.”

Another missing piece, adds Rebecca Knickmeyer, a psychologist at the University of North Carolina, Chapel Hill, who worked with the Cambridge group for about five years, is evidence of testosteroneʼs importance in the human brain.

She and her colleagues are scanning the brains of babies soon after birth, looking for sex differences in sizes of specific brain areas ― such as the amygdala, where much emotional processing occurs ― and whether those differences change over time. “What youʼd really want to know,” she says, “is what high levels of testosterone actually do in the brain.”