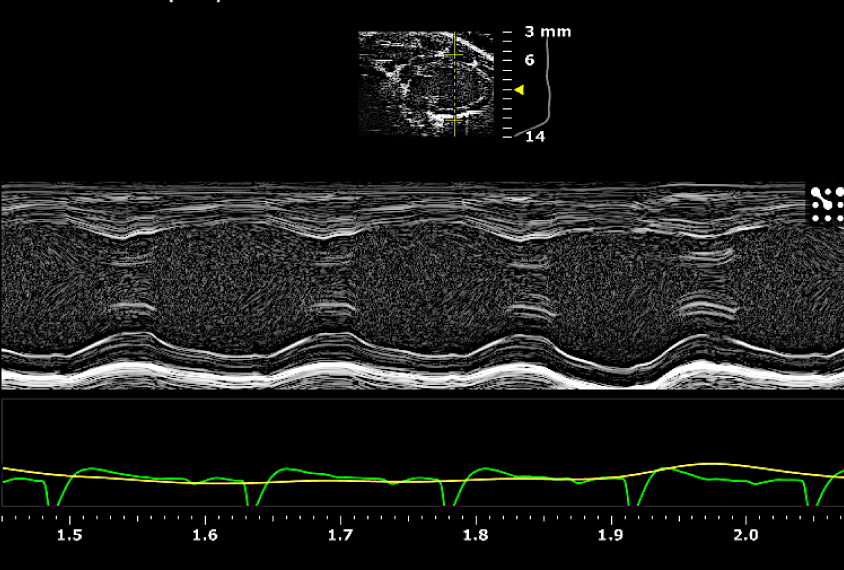 Heart scan: Ultrasounds reveal that mutations in genes linked to autism may also disrupt the heart.

Mice with autism-linked mutations often have cardiac abnormalities, according to a new study that compared heart structure and function across nine different models.

Because the brain relies on an oxygenated blood supply from the heart, abnormalities in heart function can affect neurodevelopment, says study investigator Stephania Assimopoulos, a doctoral student in Jason Lerch’s lab at the University of Toronto in Ontario, Canada.

About 10 percent of children with heart problems at birth — and half of those with severe heart defects — go on to have language, motor or other neurodevelopmental difficulties. Similarly, many autistic people have disruptions to their autonomic nervous system, which regulates the heart, suggesting links between the organ and brain development.

Some of the mice model autism-linked conditions, such as fragile X and San Filippo syndromes. Because these conditions are extremely rare in the general population, they are difficult to study in cardiac clinics, says Mark McCauley, associate professor of cardiology at the University of Illinois at Chicago. McCauley was not involved in the new work but has studied cardiac arrhythmias in mouse models of Rett syndrome.

The researchers used ultrasound to examine heart structure and function in mice with mutations in six autism-linked genes: ARID1B, CHD8, FMR1, SGSH, SHANK3 and VPS13B. They also looked at mice with deletions in a stretch of DNA called 16p11.2, which are linked to autism and other neuropsychiatric conditions.

ARID1B, FMR1 and 16p have been strongly linked to both autism and congenital heart disease, whereas VPS13B is newly connected to autism, and there are few known instances of heart problems in people with mutations in the gene. “We wanted to get a spectrum of models with respect to both phenotypes,” Assimopoulos says.

Of all the models, the 16p mice had the most cardiac anomalies, followed by mice with mutations in ARID1B or FMR1. Both genes affect a signaling pathway called Wnt/beta-catenin, which regulates cell growth and cell death. The pathway is a good target for future research on autism and the heart, McCauley says.

But in both cardiac structure and function, the model mice were more different from each other than they were from control mice, echoing the heterogeneity seen in other autism traits.

It’s still unclear whether the heart anomalies and brain function are causally linked in the animals or simply demonstrate how a gene can serve multiple functions, Lerch says. But the findings suggest the heart contributes to autism traits in at least some mice.

“There are indeed phenotypes worth investigating further and linking to the brain,” he says.

The findings were published in Autism Research in April.

Cardiac research in autistic people often focuses on functional problems, but the differences among models were roughly equally split between structural and functional ones, Assimopoulos says. “There are cases of structural abnormalities that we may be missing.”

The findings support the theory that there are genetic links between autism and congenital heart defects, though the exact mechanisms are still unclear, says Matthew Oster, a pediatric cardiologist at Children’s Healthcare of Atlanta in Georgia, who was not involved in the work.

The work also underscores the need to monitor neurodevelopment in children born with heart problems, he says. Such children are 32 percent more likely to have autism than those born with healthy hearts, Oster has shown.

Similarly, clinicians seeing children with autism may want to evaluate them for heart conditions, McCauley says.

The team is working to compare the heart data with brain scans of the mice to better elucidate how the two organs influence each other, Assimopoulos says. Knocking out the genes in only the heart or brain could also help answer that question, she says.