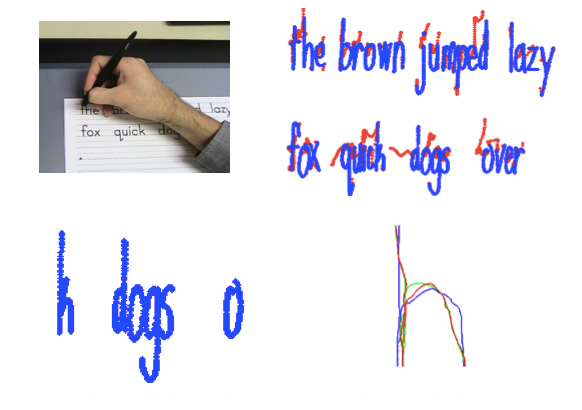 Post script: A digital tablet that records pen pressure, speed and precise letter formation while children copy words is being used to study handwriting in autism.

The wobbly handwriting of many children with autism may reflect differences in their brains’ motor and working memory systems, according to a poster presented Monday at the 2012 Society for Neuroscience annual meeting in New Orleans.

Stewart Mostofsky and his colleagues at the Kennedy Krieger Institute in Baltimore used a digital tablet and pen to record precise handwriting metrics of 12 boys with autism, 8 with attention deficit hyperactivity disorder (ADHD) and 12 controls.

The tool measured pen pressure, strokes, speed and precise letter formation while the children copied an eight-word phrase that uses every letter in the alphabet.

In one experiment, participants saw the words on one line and were instructed to copy their exact shape and spacing on a separate line below. This is how handwriting is usually taught in schools. Because the children must hold a picture of the letters in their minds while copying, it requires working memory as well as fine motor skills.

In another trial, the children could see the letters under their papers and were told to trace over them as carefully as possible. This task would not require working memory. For a third condition, they were told to trace as quickly and accurately as they could.

For all three scenarios, the researchers found differences in handwriting kinematics — the speed, acceleration and smoothness of movements — among the three groups. Children with autism and those with ADHD were faster than controls at each task. But that speed came at the expense of accuracy.

When analyzing how much the children deviated from the template, the researchers found that children with autism or ADHD performed poorly on the copying task. The autism group also struggled with tracing, whereas the ADHD traced as well as controls.

What’s more, in all three scenarios, the children with autism who were worst at reproducing the letters scored lowest on working memory sub-scores of an intelligence quotient test. The other two groups did not show this association.

“It seems to be really autism-specific,” says Benjamin Dirlikov, a research assistant in Mostofsky’s lab who presented the work. “It’s getting to this idea that it’s not only motor dysfunction but also higher cognitive centers contributing to this poor motor performance.”