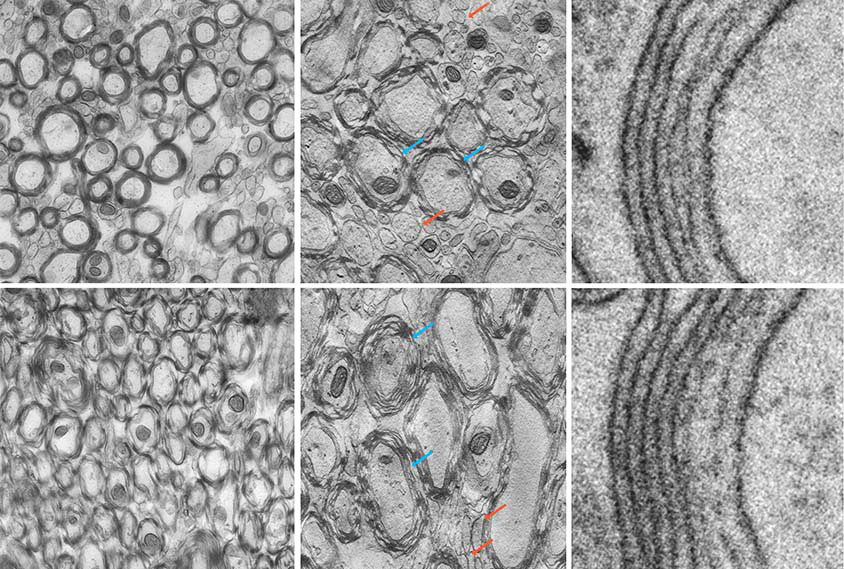 Mice chemically coaxed to produce high levels of an autism-linked gut molecule have anxiety-like behavior and unusual patterns of brain connectivity, according to a study published today in Nature. The findings present a direct mechanism by which the gut could send signals to the brain and alter development, the researchers say.

“It’s a true mechanistic paper, [like] the field has been asking for,” says Jane Foster, professor of psychiatry and behavioral neurosciences at McMaster University in Hamilton, Canada, who was not involved in the study. Although it’s not clear that this exact signaling pathway is happening in people, she says, “this is the sort of work that’s going to get us that answer.”

The molecule, 4-ethylphenol (4EP), is produced by gut microbes in mice and people. An enzyme in the colon and liver converts 4EP to 4-ethylphenyl sulfate (4EPS), which then circulates in the blood.

Mice exposed to a maternal immune response in the womb have atypically high blood levels of 4EPS, as do some autistic people, previous research shows. And injecting mice with the molecule increases behaviors indicative of anxiety. But it wasn’t clear how the molecule could contribute to those traits.

In the new work, researchers show that 4EPS can enter the brain and that its presence is associated with altered brain connectivity and a decrease in myelin — the insulation around axons that helps conduct electrical signals. Boosting the function of myelin-producing cells, the team found, eases the animals’ anxiety.

“This is one of the first — maybe, arguably, the first — demonstrations of a specific microbe molecule that has such a profound impact on a complex behavior,” says lead researcher Sarkis Mazmanian, professor of microbiology at the California Institute of Technology in Pasadena. “How it’s doing it, we still need to understand.”

Mazmanian and his colleagues engineered two strains of bacteria to produce enzymes that convert the amino acid tyrosine to 4EP in large amounts. Germ-free mice — which lack a gut microbiome — fed these bioengineered bacteria had high blood levels of 4EPS and altered behaviors. Compared with control mice, which were fed bacteria without the engineered enzymes, they showed increased anxiety-like behaviors, atypical social behaviors and fewer ultrasonic vocalizations.

Both groups of mice performed similarly on cognitive tasks, however, suggesting that the effects of increased 4EPS are limited to emotional behaviors. In line with that idea, mice with high levels of 4EPS had unusual connectivity patterns in brain regions related to emotion processing, functional ultrasound images showed.

At the cellular level, the animals have immature oligodendrocytes, brain cells that produce myelin. They also have low levels of myelination throughout the brain, which could explain the connectivity changes, the researchers say.

Treating 4EPS mice with the drug clemastine fumarate, which encourages oligodendrocytes to mature, prevented the increased anxiety behaviors in the animals, the researchers found.

“What that tells us is that the arrest in oligodendrocyte maturation is critical for the changes in behavior,” Mazmanian says.

Axial Therapeutics, a microbiome-based treatment company that Mazmanian co-founded and directs, is conducting a clinical trial of an experimental drug, AB-2004, that could sop up 4EP throughout the gastrointestinal tract, with the goal of treating irritability in autistic children. Giving AB-2004 to mice with high levels of 4EPS lowers those levels and lessens the animals’ anxiety-like behaviors, the team found in a study in Nature Medicine, also published today.

The drug was safe and well-tolerated in 26 autistic adolescents, the new study shows, and preliminary evidence suggests that it lowered 4EPS levels and lessened anxiety and irritability in the participants. But because the trial was designed only to assess safety, it had no control group. It was also open-label, meaning that participants and their caregivers knew they were receiving the drug, increasing the chances of a placebo effect.

“I would note that the human study is very early,” says Thomas Lumley, professor of biostatistics at the University of Auckland in New Zealand, who raised concerns about flawed statistical analyses in a 2019 paper from Mazmanian’s research group.

Lumley did not spot any similar issues with the new studies but cautions that the current clinical trial results can evaluate only “whether the treatment is worth testing properly. It would not be appropriate to draw any strong conclusions about either effectiveness or about the underlying biological mechanisms from the trial results.”

Others remain skeptical of the findings in both papers. “They’re taking mice, they’re exposing them to this chemical at really high levels, and some weird stuff happens” to their brains during development, says Kevin Mitchell, associate professor of genetics and neuroscience at Trinity College Dublin in Ireland. “To me, it just seems like a really artificial situation.”

Mitchell likens the protocol to finding that a food fed to mice in unnaturally high amounts can cause cancer: “Maybe massively concentrated amounts of some particular chemical in celery can do that, but it doesn’t make me want to stop eating celery,” he says.

But Mazmanian says that the engineered bacteria were specifically designed to produce levels of 4EPS on par with those seen in a mouse model of autism. “The statements that we used massive concentrations of molecules is completely untrue,” he says.

Even if 4EPS were to have a similar effect on brain development in people, Mitchell says, it’s unclear why blocking the molecule in adolescents would affect their anxiety, based on the proposed mechanism. “If the molecule affects myelination, then is blocking the molecule for a number of weeks in children whose brains are already myelinated supposed to do something? How could it be having an effect through that mechanism?”

Mazmanian and his colleagues acknowledge that much is still unknown — including exactly how the molecule interacts with the brain and whether the drug will prove effective in people.

“It’s the tip of the iceberg,” Mazmanian says. “There’s much more biology out there that needs to be explored.”

He says his team plans to search for 4EPS receptors in the brain to better understand how the molecule affects oligodendrocyte maturity. And Axial Therapeutics is continuing to collect data in an ongoing randomized, placebo-controlled clinical trial to evaluate AB-2004’s effectiveness.