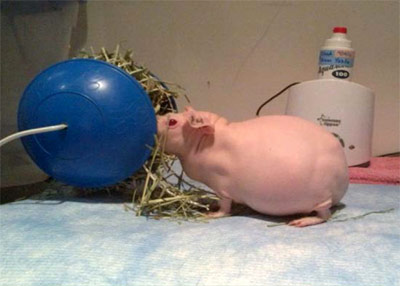 A fat, pink, hairless guinea pig, heavily pregnant, waddles eagerly up to a blue dish filled with hay made from Timothy-grass and buries her nose in the treat. While she feeds, a researcher gently wands her abdomen with an ultrasound probe, monitoring the limb movements of the two or three pups developing inside her.

According to a poster presented Tuesday at the 2013 Society for Neuroscience annual meeting in San Diego, this setup could help researchers understand how prenatal events contribute to autism.

“My main motivation for studying the prenatal period is the hope of developing a set of diagnostics for neurodevelopmental defects,” says Gale Kleven, assistant professor of psychology at Wright State University in Ohio who is leading the effort to develop the guinea pig model.

That hope is many steps down the line. But according to Kleven, guinea pigs have advantages over other rodent species commonly used to model neurodevelopmental disorders. “The guinea pig of course is a very social rodent,” with mothers and pups forming strong individual bonds, she says.

Guinea pigs also have a much larger repertoire of communication than the other rodents, Kleven says. As well as the ultrasonic vocalizations frequently studied in mouse models of autism, guinea pigs make a variety of whistles, grunts and rumbles, with different vocalizations and calls for different situations.

In addition, the pups born to rats and mice are highly immature. Guinea pig pups, in contrast, gestate over 70 days, and at birth they are relatively well-developed, or precocial, and closer to the developmental state of human newborns. “If we want to study the full spectrum of prenatal development in an animal model, we need a precocial species,” Kleven argues.

In the new study, Kleven and her colleagues performed ultrasounds on pregnant guinea pigs to document how the pups’ patterns of limb movement change over the course of prenatal development.

The pups start moving at around week 3 or 4 in utero. Their limb movements are initially scattered and asynchronous, the researchers found, but become more coordinated over time. In the last week or so before birth, “synchrony starts to fall to the wayside,” as the pups begin making more voluntary movements of their limbs.

Kleven has found the same patterns of rising and falling synchrony in rats and mice, but using ultrasound in those species is difficult, she says. “They’re not always cooperative,” because they don’t like to be restrained, for example. In contrast, guinea pigs are happy as long as they have Timothy hay and don’t need to be restrained, she says.

As an objective measure of guinea pig contentment, the researchers swabbed the mothers’ mouths for a saliva sample just before and just after the ultrasound. The procedure doesn’t increase levels of the stress hormone cortisol, the researchers found. This makes it unlikely that stress from the scanning procedure is affecting fetal behavior, Kleven says, a common problem in other animal models.

One drawback of using guinea pigs is that they cannot be genetically manipulated with the ease that a mouse can. However, they may be good models for studying environmental exposures. For example, Kleven plans to treat pregnant guinea pigs with the epilepsy drug valproic acid, which produces autism-like symptoms in rats and mice exposed in utero.

In studies of a genetic mouse model of Parkinson’s disease and of rats exposed in utero to a neurotoxin, Kleven has found less synchronized fetal movements that are related to symptoms later on in life.

This means that changes in limb movement synchrony probably won’t specifically flag autism, Kleven acknowledges. “It’s likely this would be an initial screening tool,” she says. But it’s one that would be compatible with the routine ultrasounds that are conducted between 12 and 20 weeks of pregnancy in women.

“The earlier we can intervene, the better the prognosis,” she says.