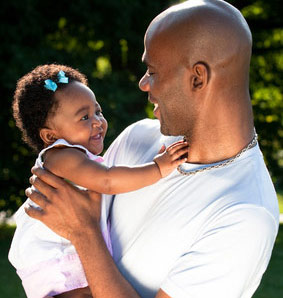 Love hormone: After a single dose of oxytocin, fathers were less willing to stop gazing at their babies.

Two new studies on the so-called ‘trust hormone’ oxytocin, presented today at the International Meeting for Autism Research in Toronto, suggest new avenues for using the drug to treat autism.

One study found that treating fathers with the hormone boosts levels in their infants. The second showed that when children with autism play with a parent, their oxytocin levels rise to those of controls.

Oxytocin, a hormone first discovered for its role in childbirth, governs social bonding and is released both in the brain and peripherally in the body.

Mutations in genes that regulate oxytocin release are thought to raise the risk of autism or autism-like traits, although some findings are contradictory. Some studies suggest that when people with autism sniff oxytocin, their performance on social tasks improves.

Ruth Feldman, professor of psychology at Bar-Ilan University in Israel, studies the development of the parent-child bond, and the role that oxytocin plays.

Feldman’s previous research has shown that mothers and fathers both have an increase in oxytocin levels in saliva when holding and playing with their babies. Her team is studying how treatment with oxytocin in parents affects hormone levels in their children, as well as how the drug might be used to treat autism and other disorders.

In one study, Feldman and her team gave 35 fathers a single dose of oxytocin by nasal puff before playing with their babies. (They didn’t study mothers because they had not yet been given approval to give the hormone to breastfeeding women.)

These fathers showed a significant increase in saliva oxytocin levels after playing with their infants, from an average concentration of 1,000 picomoles at baseline to 6,000 after play. The fathers were less willing to stop gazing at the infants, and the infants held the gaze longer, says Feldman. Fathers given a placebo didn’t show a significant rise in oxytocin or change in behavior.

Strikingly, infants showed a similar increase in hormone levels, even though they hadn’t been given any drugs, notes Feldman. That may prove relevant for treating children at risk of developing autism.

“Giving oxytocin to a parent has a parallel effect on the child, which may open a new direction for intervention for young high-risk infants,” says Feldman.

In the second study, her team analyzed oxytocin levels in parents, and in preschool-aged children with high-functioning autism, before and after a play session.

Mothers of children with autism showed no difference in oxytocin levels compared with controls, before or after play, the study found.

As might be expected, the children with autism spent less time gazing at parents and engaging in joint attention — when the parent gestures for the child to pay attention to something — compared with controls.

The children with autism had lower baseline levels of oxytocin compared with controls, a finding in line with previous research showing that adults with the disorder have low levels of the hormone.

After playing with a parent for 20 minutes, oxytocin levels in the children with autism rose to levels similar to those of controls, and remained elevated for about 40 minutes before falling back down.

“This is the first result we know of in peripheral oxytocin of young children with autism,” says Feldman. “These findings, if replicated and further understood, can serve as a baseline of intervention, maybe pharmacological or behavioral, to maintain a high level of oxytocin.”