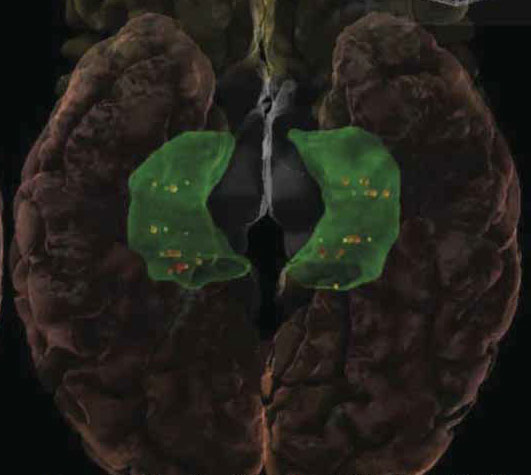 Size wise: Scientists identified a common genetic variation that influences size of the hippocampus (green), a brain area involved in learning and memory.

The largest brain imaging study ever performed has identified candidate genes that influence brain size and general intelligence, according to research published 15 April in Nature Genetics1. The effort, dubbed ENIGMA (Enhancing Neuro Imaging Genetics through Meta-Analysis), includes brain scans of approximately 21,000 people, assembled from 17 different projects, and the work of more than 200 scientists across the globe.

Some neurodevelopmental disorders, including autism and schizophrenia, have been linked to abnormal brain size, so identifying the genes that regulate brain size could help shed light on the disorders.

In the study, researchers linked a common variant near a little-studied gene called TESC to a 1.2 percent smaller hippocampus — part of the brain central to learning and memory — compared with control brains. That difference is equivalent to about three years of aging, says Paul Thompson, professor of neurology at the University of California, Los Angeles, and leader of the study.

“Although it’s a modest difference, we think it will affect brain reserve for combating disease later in life,” says Thompson. For example, people start showing symptoms of Alzheimer’s disease or memory loss once the size of the brain has deteriorated just ten percent, so a two percent difference could be significant, he says. “These genes tilt the scale quite strongly in terms of eroding reserve or, on the flip side, boosting reserve.”

A second study, published in the same issue of Nature Genetics, also found that this variant influences the size of the hippocampus, as does another variant on the same chromosome2. Part of the CHARGE (Cohorts for Heart and Aging Research in Genomic Epidemiology) study, it encompassed nearly 10,000 people.

Another variant, in a gene called HMGA2, affects both intracranial brain volume and intelligence quotient (IQ). People with a particular variant of this gene, which is present in almost half the world’s population, score about 1.3 percent higher on IQ tests, according to the ENIGMA study.

The HMGA2 gene has also been linked to height, but Thompson says that an overall increase in body size is not sufficient to explain its effect on brain size.

ENIGMA is not just an imaging study. It takes a relatively new approach to genome-wide association studies (GWAS), in which scientists look at whether common variants across the genome are associated with a particular trait. Most GWAS focus on detecting the genetic basis of specific diseases or disorders, including autism, by identifying variations that are statistically more common in the affected group than in controls.

Such efforts have identified hundreds of disease-linked genes, with most exerting a small effect. In order to find additional candidates, studies have become larger and larger, some involving hundreds of thousands of people. ENIGMA takes a different tack, examining the link between genetic variations and the size of the brain rather than a specific disease.

“It’s not big for a GWAS study, but it’s astronomically big for a brain imaging study,” says Thompson. And though it is not the first GWAS to use brain imaging as an endpoint, it is by far the largest.Previous such efforts involved about 1,000 people.

One reason such studies tend to be so large is because they are susceptible to false-positive results, a byproduct of searching for links between thousands of genetic variants and a particular trait. Scientists have ways of statistically controlling for these, but it requires large numbers of participants.

ENIGMA came about because Thompson and others attempting brain imaging GWAS were having a hard time gathering the number of participants they needed, so three years ago they began recruiting labs from around the world to contribute genomic and brain imaging data.

The project, “really accelerated once people found that the cohorts they were scanning were not going to have enough power to support new genetic findings,” says Thompson.

Bringing together all that data was a huge technical challenge, he says. For example, researchers had to agree to use the same gene scanning technology, and to make sure that MRI machines at different sites were producing comparable results.

“The fact that they tackled this and succeeded is a huge credit to the consortium,” says Patrick Sullivan, professor of genetics at the University of North Carolina, Chapel Hill, who was not involved in the study.

Sullivan is now collaborating with Thompson’s group to examine whether genetic variations that influence brain size are also linked to schizophrenia, autism and other disorders. “The genes they are finding are not ones that would be on our short list,” says Sullivan, and they point toward new areas of investigation.

Though Thompson does not have an estimated cost of the study — each center contributed data from its own individually funded projects — brain imaging costs alone amounted to about $10 million. That doesn’t include the time and expertise of the scientists involved in organizing and analyzing the data.

Despite the large size of the study, not everyone is confident in the results.

“The authors identify two excellent candidates, but without some solid biological experiments showing what they do, or without further replication, I’m not convinced,” says Bernie Devlin, professor of psychiatry at the University of Pittsburgh. Combining the analysis of a number of studies “is subject to biases that would be difficult to control, despite the absolute excellence of the researchers.”

Participants in the ENIGMA study include both healthy adults and those with diseases, including Alzheimer’s.

As the number of subjects grows, researchers hope to examine how the effects of different variants change with age or with different disorders, by looking at different subgroups.

Thompson’s team next plans to look for genes that regulate the size of other parts of the brain, which could be of great interest to autism researchers.Previous studies suggest that brain size, particularly in the prefrontal and frontal cortex, is abnormal in some children with the disorder, at least during some stages of development.

In fact, it appears that children with autism who have brain growth abnormalities are those who are more severely affected, says Flora Vaccarino, professor of neurobiology at Yale University, who was not involved in the study. Though more research is needed to confirm that connection, it provides support for the idea that genes governing brain size may play an important role in the pathogenesis of autism, she says.

Vaccarino also points out that different genes appear to govern the size of the hippocampus and the brain overall, “suggesting specific developmental processes” regulate different aspects of brain growth.

Part of the impetus for incorporating brain scans into GWAS is the theory that the brain reflects the action of genes more directly than do the symptoms of disease, such as memory loss. If this is the case, then brain imaging should be able to identify relevant genes using fewer people than standard GWAS.

But the results of ENIGMA seem to contradict this idea. After all, the consortium had to pool data from more than a dozen groups and thousands of people to find statistically significant results. But, Thompson says, the brain imaging metrics used in the study — overall brain volume and volume of the hippocampus — are relatively crude, and more precise methods of measurement may reveal genetic influences in much smaller studies.

One possibility is using diffusion imaging to track the brain’s white matter, which contains the connecting processes of neurons.

In another recent study from Thompson’s lab, encompassing about 300 healthy young adults, researchers found that those with a particular variant in an autism-linked gene called CNTNAP2 had different brain structure than those without it3. People with the risk variant had more local connections and fewer central hubs — areas with lots of long-range connections — a pattern that has been found in brain imaging studies of autism.

Those findings follow a smaller study that showed similar deficits in long-range connections in both children with autism and typically developing children, using functional brain imaging.

The CNTNAP2 variant is very common, present in about one-third of the population, and not sufficient to cause autism on its own. Rather, it is likely to act in concert with other common or rare genetic variants, as well as environmental factors, to raise the risk of the disorder.