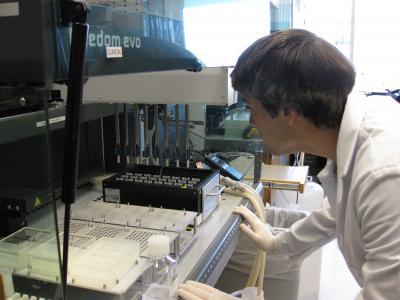 Revealing risk: The largest genome-wide study for autism has found variants in the general population that are more common in people with autism.

Autism results from a diverse mix of common and rare genetic variants, many of which act in pathways that form and maintain connections between neurons. That’s the message from the largest genome-wide association studies of autism to date, published online today in Nature 1,2.

One of the two new studies, which screened more than 10,000 people, for the first time identifies a cluster of common variants — defined as mutations that occur in five percent or more of the general population — that are more prevalent in people with autism than in healthy controls.

Other research groups have found common variants that are disproportionately prevalent in people with autism3. But because their sample sizes have been too small, none have found associations with genome-wide significance.

“This is the first paper with good statistical evidence that shows that some of these common variants are involved [in autism],” says lead investigator Gerard Schellenberg, professor of pathology and laboratory medicine at the University of Pennsylvania.

Although this is the first confirmation of common variants associated with autism, researchers have for some time been expecting to find them.

“[The work] is an important step because it underscores what many of us believe,” says Mark Daly, associate professor at the Massachusetts General Hospital, who was not involved in either study. “All [types of variants] provide us little pieces of the puzzle and little leverage points with which we can learn about the biology of the disease.”

In the second study, a scan of 2,268 of the same participants, the researchers found nine new and four previously identified copy number variations (CNVs) — large deletions or duplications of DNA — associated with autism.

Interestingly, these CNVs are all involved in one of two major biological pathways: one pathway that’s related to CDH9 and CDH10 function, and another — known as the ubiquitin pathway — that degrades proteins at the synapse, the junction between neurons. Both pathways are important for forming healthy neuronal connections, a developmental process that may go awry in people with autism.

Both the common variant study and the CNV study combined blood samples from two large autism gene collections: the Autism Genetic Resource Exchange, a gene bank of more than 4,000 samples from families of children with autism, and another cohort of 8,523 samples that Schellenberg began aggregating from several institutions about 14 years ago.

The researchers screened the samples for more than 550,000 single-nucleotide polymorphisms (SNPs) — single-letter variations in the DNA code — looking for significant frequency differences between the autism and control samples. When they scanned each collection separately, they didn’t find any significant SNPs.

When they combined the two datasets in a meta-analysis, however, they found six SNPs associated with autism.

People who carry the most significant SNP are about 1.2 times more likely to have autism than those who don’t. “It’s a real, but small effect — the first crack in the puzzle,” says Schellenberg. The researchers also found 24 SNPs that almost reach statistical significance.

The significant SNPs all lie in the genomic region between CDH9 and CDH10. These genes make cell-adhesion proteins, which help neurons stick to other cells. The proteins are also crucial for brain development, for guiding neurons to their proper place in brain tissue, and for forming connections with other neurons4.

To probe the functional significance of CDH9 and CDH10, the researchers assessed their expression in tissue samples of human fetal brains. They saw almost no expression of CDH9, but found CHD10 to be abundantly and preferentially expressed in the brain’s frontal cortex.

“The frontal lobe has been implicated strongly in autism. It’s the part of the brain that’s involved in complex behavior and development and abstract thinking,” says lead investigator Hakon Hakonarson, director of the Center for Applied Genomics at The Children’s Hospital of Philadelphia.

Still, analyzing expression of genes in the fetal brain might not be particularly informative, as their expression may change greatly in the first few years of development when autism is thought to arise, Hakonarson adds. “We believe that it’s going to be exceedingly likely that [these proteins] play a role in autism, but further studies are under way currently to prove that.”

The CNV scan also points to other sticky proteins. Of the 13 identified CNVs, 3 comprise several genes — including neurexin 1 (NRXN1), neuroligin 1 (NLGN1) and contactin 4 (CNTN4) — that code for cell-adhesion molecules. Four CNVs affect the ubiquitin pathway, which helps degrade unwanted proteins, such as during the pruning of unused neuronal connections5. This pathway has never before been implicated in autism.

The researchers say they are encouraged by the fact that both common and rare variants seem to implicate some of the same kinds of proteins. But others note that the full picture may be more complicated.

“Genes in these categories have a genomic footprint that’s almost ten times as large as the average gene in the genome,” says Daly. “It doesn’t mean they aren’t interesting categories; they’re just more likely to have a sequence variant that looks interesting, just by light of being larger.”

“It’s a very important fact that isn’t accounted for in the types of analyses that people are doing,” he adds.

“We expect there to be 20 to 30, or maybe 50 to 100 more of these out there, that all combine to determine the risk of whether somebody will be born with autism,” he says.