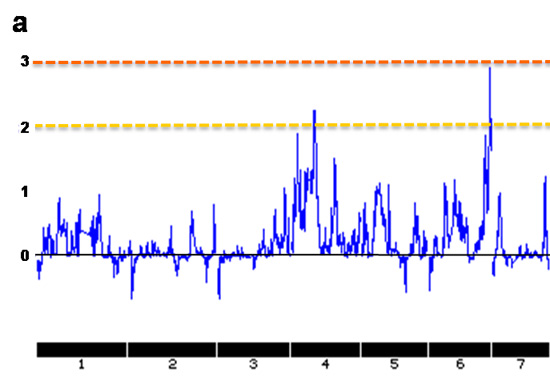 A detailed genetic scan of families with autism has found a region on chromosome 5 that is strongly associated with autism, and two new genomic areas that may harbor rare variants relevant to the disorder, according to a study published today in Nature1.

Previous studies of autism have implicated spots on chromosomes 15, 16, 5 and many others, but this is the first to link the disorder to the 5p15 region. In particular, the finding implicates a gene called semaphorin 5A, or SEMA5A, which is expressed throughout the brain and helps guide neurons to their targets.

Autism is highly heritable, yet scanning the genome has turned up few clear genetic markers. In the past year, several studies have suggested that a mix of common variants — which occur in at least five percent of the population — and rarer variants contribute to the disorder. Some of the variants found so far are located within or near genes that help form or maintain synapses, the connections between neurons.

For the new study, researchers combined two approaches to examine the genomes of 1,031 ‘multiplex’ families — in which more than one member has been diagnosed with autism.

One strategy, called linkage analysis, is used to analyze DNA from people with autism and their relatives to detect disease-associated genetic regions that are passed down. The family-based approach cuts down the number of people required to identify rare variations.

The other approach, called genome-wide association, has been used in the past several years to detect common variants in the form of single-nucleotide polymorphisms (SNPs) in people with and without the disorder.

Using these methods, the researchers found that chromosomal regions 6q27 and 20p13 are significantly linked with autism. A scan of 500,000 SNPs also revealed a single nucleotide on chromosome 5 that is associated with the disorder.

Located in the 5p15 region, the variant is protective, meaning that its presence decreases the risk of autism. It is a mere 80 kilobases from SEMA5A, whose expression has previously been linked to autism2. Earlier this year, changes in another spot on chromosome 5 were reported to be associated with autism3, but those variants did not stand out in this study.

SEMA5A protein appears to trigger signaling of the MET pathway4, which helps regulate proliferation of cells that line the gut; variations in the MET gene have been shown to double the risk for autism5.

Interestingly, when the scientists examined candidate genes previously associated with autism, such as CNTNAP2, GABRB3 and MET, they were able to validate very few of them. One notable exception is the MECP2 gene, mutations in which cause Rett syndrome.

In 2008, using the same set of genomic data as in the current study, lead investigator Mark Daly and his colleagues reported that small deletions and duplications in the 16p11.2 chromosomal region confer risk for autism6. That region was also not found to be significant, but the lack of overlap in findings does not rule out a role for the genes in autism, says Daly, an associate professor of medicine at Massachusetts General Hospital.

“At this point, it’s both encouraging and sobering,” Daly says. “It’s encouraging that we can find promising sites to follow up on. But it’s sobering from the standpoint that, as we expected, the problem is extremely complex.”

As with complex diseases such as diabetes and schizophrenia, he says, autism research is likely to require much larger samples in order to find new candidates and validate existing ones.

Given the impressive size of the sample and statistical rigor used in the new study, it’s becoming clear that it will not be easy to find new genes for autism, adds Isabelle Rapin, a professor of neurology and pediatrics at the Albert Einstein College of Medicine in Bronx, New York, who was not involved with the study.

“Until it is understood what the genes do in the brain, discovery of new drugs that are efficacious will be very difficult and time consuming,” she says.

Daly and colleagues went on to examine SEMA5A expression in the postmortem brains of 20 people with autism and 10 controls. People with autism have lower levels of the protein, although some values fell within normal range, the researchers found.

“The finding is a step forward in connecting specific biological mechanisms to autism,” says Niklas Dahl, a professor of genetics and pathology at Uppsala University Children’s Hospital in Sweden.

In 2006, Dahl and his colleagues reported that the expression of SEMA5A is lower in people with autism.

Taken together, the results implicate SEMA5A in at least a subset of autism cases, Dahl says. “If the findings are confirmed in larger patient cohorts, SEMA5A may provide a target for future interventions in patients with autism.”