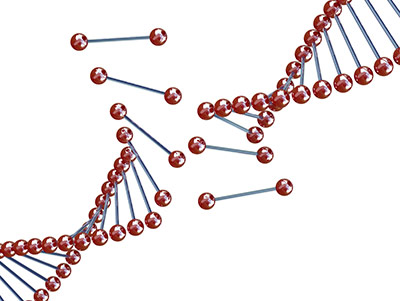 Cut and paste: Genome-editing proteins generally have one part that binds a DNA sequence and another that snips out that code.

Genome sequencing studies of individuals with autism have left researchers with an embarrassment of riches: hundreds of single-letter mutations of uncertain relevance to the complex brain disorder.

Thanks to a suite of new tools in synthetic biology, it’s now possible to test the relevance of these genetic glitches quickly and cheaply by inserting them into living cells in the lab and observing the effects.

Synthetic biologists manipulate the body’s building blocks — DNA, RNA and proteins — to engineer structures that do not exist in the natural world.

On 15 February, two groups published back-to-back papers in Science describing a new synthetic technology known as CRISPR, for clustered regularly interspaced short palindromic repeats. This method allows researchers to create molecular scissors that cut and paste essentially any mutation into the genome of any cell, including a human stem cell1, 2.

In the 9 May issue of Cell, researchers reported that they had used these molecular scissors to insert several mutations into mouse cells at the same time3.

“What took us, in the past, three years to make — a triple-knockout mouse — we can do now basically in three weeks,” says Rudolf Jaenisch, lead investigator of the Cell study and professor of biology at the Massachusetts Institute of Technology (MIT) and the Whitehead Institute.

Jaenisch’s team is editing human stem cells to make models of Rett syndrome, a regressive genetic disorder that often includes autism symptoms. He is one of several scientists applying the tricks of synthetic biology to autism and related disorders.

Feng Zhang and his colleagues at MIT and the Broad Institute of MIT and Harvard are using the new tools to model another autism-related disorder, Angelman syndrome, in human cells. And George Church’s group at Harvard University is using CRISPR to manipulate gene expression in human neurons.

“We hope that this technology will be a game-changer in allowing us to make not only genetically engineered mouse cells, but human cells,” Jaenisch says.

Before the advent of genome-editing tools, the only way to model autism-linked mutations in human cells was to create induced pluripotent stem (iPS) cells. With this approach, researchers place skin cells from individuals with autism into various chemical soups to reprogram them into stem cells. Then, using other concoctions, they coax the stem cells to differentiate into neurons.

These iPS neurons are useful because they mimic the genome of the original donor. But because each person carries many genetic variants — some damaging, some benign — the approach makes it difficult to pin down which ones are responsible for any particular change in the cell. The primary advantage of genome editing is that it allows researchers to observe one or several mutations in a precisely controlled way.

The first genome-editing tools, called zinc finger nucleases, or ZFNs, debuted in the mid-1990s. ZFNs are proteins that have two parts, or domains: one that binds to a certain sequence of DNA and another that snips out that part of the code.

One of the most famous applications of ZFNs is as an HIV treatment. Two research groups designed ZFNs that damage CCR5, a protein that’s required for most strains of the virus to enter and infect T cells. Several clinical trials are testing the effectiveness of this approach.

A big problem with ZFNs, though, is their relatively low specificity. Their DNA-binding domain is made of ‘modules,’ or preset three-letter strings of DNA. These modules must be arranged in just the right way to match a given target sequence of DNA — a difficult and time-consuming task for protein engineers.

In 2011, researchers debuted a group of enzymes called transcription activator-like effector nucleases (TALENs)4. With TALENs, each module binds to just one letter of DNA, allowing for much better specificity.

Several companies sell customized TALENs, costing anywhere from hundreds to thousands of dollars each, that target a particular genetic mutation.

“It lets you make as many as you want of these molecular scissors, to target as many genes as you want, and it’s not too difficult — just a couple of days’ work,” Sanjana says.

Sanjana is using TALENs to model Angelman syndrome, which is caused by mutations in the maternal copy of the UBE3A gene. He and his colleagues insert these mutations into human stem cells, and then differentiate them into mature neurons of the brain’s cortex in the lab, a process that takes several months.

The UBE3A protein is involved in tagging other proteins in the neuron to mark them for destruction. “It’s a molecular kiss of death,” Sanjana says.

The researchers are using mass spectrometry to measure the precise protein composition of neurons derived from individuals with Angelman syndrome and those of controls, which are genetically identical except for the UBE3A mutation. This analysis will hopefully reveal the protein targets of UBE3A that are key to the development of Angelman, he says. “That would be very helpful, because maybe you could design a drug that’s specific to that protein that’s hanging around in the cell too long.”

Yun Li, a postdoctoral fellow in Jaenisch’s lab at MIT, is taking a similar approach, using TALENs to model Rett syndrome. The human neurons Li has created with TALENs have some of the same morphological abnormalities as neurons harvested from mouse models of the syndrome, she says. But the human cells also show unexpected changes in gene expression. The work is currently under review.

Researchers seem most excited about CRISPRs, the latest type of molecular scissors. In nature, CRISPR proteins are an integral part of the bacterial immune system, helping bacteria target and attack specific viral genes.

“I like to refer to [CRISPRs] as a flu shot for bacteria,” says John van der Oost, professor of microbiology at Wageningen University in the Netherlands. Over the past few years, van der Oost, Zhang and Church have worked on hijacking CRISPRs’ abilities in order to edit DNA.

With ZFNs and TALENs, every edit requires a different engineered protein, each targeting a different part of the genome. CRISPR, in contrast, always uses the same DNA-binding protein, dubbed CAS9. This protein holds small pieces of RNA that guide it to a specific place in the genome, and researchers can swap out the RNA to create the desired edit. As a result, RNA engineering is much faster and cheaper than protein engineering is, making CRISPR an attractive option.

“It’s much more user-friendly,” says Carlos Barbas, III, professor of chemistry and molecular biology at the Scripps Research Institute in La Jolla, California. CRISPR is also more amenable to making several edits at once, he says. “You can go in and order 50 RNAs, target 50 sites, and modify them all sequentially.”

All of these genome-editing techniques still have technical challenges, most related to how specifically they bind DNA. Results would be tainted, after all, if the scissors attach to target genes as well as non-target genes with similar sequences.

Still, the technology has enormous potential for understanding complex genetic disorders such as autism, researchers say. “These are tools that allow you to make several modifications at once,” Barbas says. “Previously, that would have been impossible.”