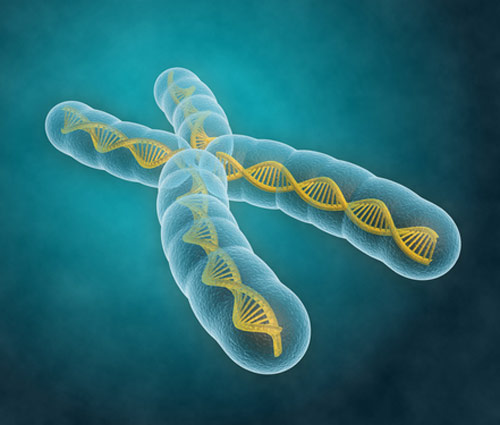 Gender bias: Mutations on the X chromosome could account for the fact that autism is more common in boys than in girls.

TBL1X, a gene located on the X chromosome, is associated with autism in males but not in females, according to a study published 3 November in Molecular Autism1.

Because autism is roughly four times more common in boys than in girls, several studies have investigated whether mutations in genes on the X chromosome contribute to the disorder.

In the new study, researchers used data from three genetic databases to look for variants in the X chromosome that are associated with autism.

The study included a total of 5,856 individuals from 1,456 families that have one or more children with autism, from two different sources: the John P. Hussman Institute for Human Genomics in Miami and the Autism Genetic Resource Exchange. It also looked at 1,204 individuals with autism and 6,472 controls from the Autism Case-Control Study, which houses data from multiple sites across the United States.

Altogether, the researchers analyzed nearly 11,000 single nucleotide polymorphisms, which are alterations to single DNA bases, on the X chromosome.

The researchers analyzed data from the 1,204 individuals with autism the same way they analyzed the family data, by treating the individuals as members of theoretical families with missing parental data.

The analysis also produced separate results for males and females. Most studies separate the two categories at the outset, which limits the analyses to siblings of the same gender and lowers the studies’ statistical power, the researchers say2.

Based on their analysis, they linked a variant in one gene, TBL1X, to autism, but only in males.

The variant is associated with autism when the results from the three datasets are combined, the study found. This variant is also associated with autism in the individual data alone, and nearly met statistical significance with the family data. It is difficult to reach an association for a rare variant with so few participants, the researchers say.

TBL1X is involved in the Wnt signaling pathway, which is important in brain development and has been implicated in autism and schizophrenia. Engrailed 2, a gene whose expression is regulated by the Wnt pathway, is also associated with autism.

TBL1X is located five megabases from neuroligin 4X, which codes for an autism-linked protein that functions at the junctions between neurons. It is also found within deletions of this region that are associated with autism3.