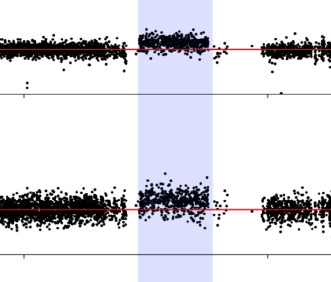 Hot spot: The 7q11.23 genetic region is duplicated in some people with schizophrenia, and leads to social anxiety and language delay.

The same genetic region that is missing in people with Williams syndrome is likely to be duplicated in some people with schizophrenia, according to a study published 17 July in Biological Psychiatry1.

Lacking one copy of the 7q11.23 region leads to Williams syndrome, a developmental disorder characterized by intense social interest. People with an extra copy of the same region have autism-like features, prompting researchers to suggest that duplication and deletion of the same region lead to opposite effects. The new study suggests that duplication of the region may also trigger schizophrenia.

In the study, researchers looked at duplications and deletions, or copy number variants (CNVs), in 554 people of Ashkenazi Jewish heritage who have schizophrenia and 1,014 controls of the same heritage. In line with previous findings, CNVs are more common in the group with schizophrenia than in controls, the study found. In particular, individuals with schizophrenia are about five times more likely than controls to have a deletion that is longer than 1 megabase.

Previous studies linking duplication of the 7q11.23 region to autism have mainly been in children, who are generally too young to show symptoms of schizophrenia. It is possible that many of these same individuals could be diagnosed with schizophrenia later in life, the researchers suggest.

In support of this theory, the two Ashkenazi Jewish individuals identified with the duplication had severe social anxiety and language delay before developing symptoms of schizophrenia.

Some researchers have similarly suggested that individuals with a deletion of 22q11.2 — a common schizophrenia-risk region — who are diagnosed with autism may in fact have early-onset schizophrenia.