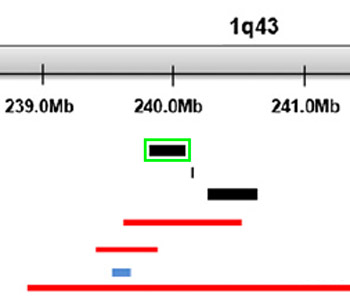 Click to enlarge image Genetic culprit: Autism-linked deletions of a region on chromosome 1 range from 473 kilobases to 25 megabases, each disrupting the CHRM3 gene (green box).

Deletion of CHRM3, a gene on chromosome 1, leads to autism-like behaviors, according to a case study published 16 December in the European Journal of Medical Genetics1.

Larger deletions within the chromosomal region, dubbed 1q43, result in seizures and other symptoms, along with the social deficits and repetitive behaviors that accompany loss of CHRM3.

The results suggest that CHRM3 is responsible for the autism-like features associated with the region, the researchers say.

Copy number variations (CNVs) are large duplications or deletions of stretches of a chromosome that include many genes. Studies have linked several CNVs to autism, but in most of those cases, it’s unclear which gene within the CNV is responsible for the autism symptoms.

Researchers have so far identified more than 50 individuals who have a deletion in a 25-megabase region in 1q432. These deletions lead to a clinical syndrome that includes intellectual disability, abnormal facial features, heart problems, an abnormal corpus callosum, seizures and a small head.

A study last year described a 7-year-old boy with a smaller deletion in 1q43 that encompasses only three genes — CHRM3, RPS7P5 and FMN2. The boy has autism, is short, has repetitive behaviors that sometimes lead to self-injury and has unusual physical features, such as a bent pinkie finger. He does not have an abnormal head size or seizures3.

In the new study, researchers examined the symptoms of a 3-year-old boy who has a deletion of only CHRM3. This boy has intellectual disability, autism, problems eating and misaligned eyes. He does not have seizures or an abnormal corpus callosum or head size. Unlike the 7-year-old, however, he is not short.