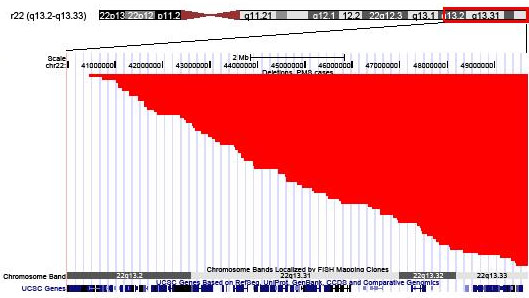 Enlarge image Missing links: The size of the deletion (red bars) in chromosomal region 22q13 correlates with a host of developmental symptoms.

Missing links: The size of the deletion (red bars) in chromosomal region 22q13 correlates with a host of developmental symptoms.

In a study of people missing an autism-linked region on chromosome 22, researchers have found that the larger the deletion, the more likely the individual is to have severe symptoms, from motor and speech delays to a large head and fleshy hands1.

The study, published 7 October in the Journal of Medical Genetics, analyzed individuals with the rare Phelan-McDermid syndrome, caused by deletions of various sizes in the chromosomal region 22q13. The syndrome is characterized by a wide array of symptoms, often including autism or some traits of the disorder.

Using comparative genomic hybridization, the researchers measured the precise sizes of the deletions carried by 71 individuals with the syndrome, ranging in age from infancy to 40 years. The deletions range from about 0.2 to 9 megabases in length.

All include the region encoding SHANK3, a well-known autism candidate gene, and all but two include IB2, which seems to affect social behavior.

The participants all show developmental delay, and the larger the deletion, the more severe their delay. The study also found that 16 clinical features — including neonatal problems, language delay, crawling and walking delays, large head, facial asymmetry, small and grooved toenails, and fleshy hands — are significantly associated with larger 22q13 deletions.

These data suggest that the features are caused by the loss of genes other than SHANK3 in the region, the researchers say.

In the study, 26 percent of participants older than 3 years were diagnosed with autism, according to parent reports. The median deletion size in these individuals is about 3.4 megabases, significantly smaller than that of participants not diagnosed with the disorder. One possible explanation for this, the researchers say, is that it’s more difficult to diagnose autism in children with an array of severe developmental and physical symptoms.