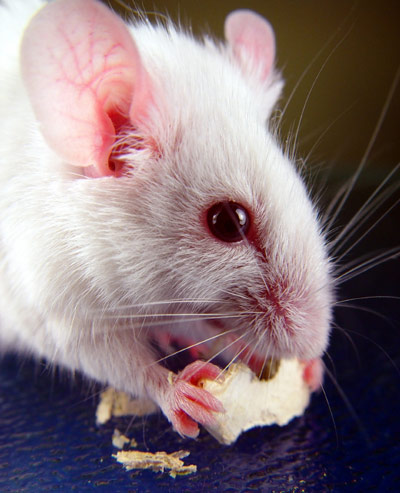 Mice with a duplication of SHANK3, a gene with strong links to autism, are hyperactive and manic, reports a study published 7 November in Nature1.

Mutations in the gene are found in about 2 percent of people with autism2. Duplications of the 22q13 chromosomal region, in which the gene is located, have been found in people with schizophrenia, autism and attention deficit hyperactivity disorder (ADHD), suggesting that SHANK3 is likely to be important for normal brain function.

This study is the first to examine the duplication of SHANK3 alone, and not as part of a larger group of genes.

The research team engineered mice with an extra copy of the mouse version of SHANK3. They measured how much SHANK3 the mice produce and observed how much the mice move in an open, unfamiliar environment, a standard measure of hyperactivity in rodents.

The mice produce about 50 percent more SHANK3 protein than their genetically typical counterparts, the scientists found, much like people with an extra copy of the gene do. The mice also show signs of hyperactivity.

The team observed on further testing that the SHANK3 mice show behaviors typically seen in people going through manic episodes. The mice are easier to startle, eat more, have disrupted sleeping patterns and show heightened sensitivity to amphetamine. The mice also have spontaneous seizures.

To see whether similar symptoms occur in people with SHANK3 overexpression, the researchers searched a genetics database at Baylor College of Medicine in Houston, Texas, looking for people who have small duplications containing the SHANK3 gene. The smaller the duplication, the more certain the researchers could be that any neuropsychiatric symptoms are attributable to an overabundance of SHANK3.

The team found two people: One, an 11-year-old girl, has seizures and a diagnostic history of hyperactivity, increased appetite, kleptomania and poor attention. Like the mice, she is also not calmed by stimulant medications prescribed for ADHD. The other, a 35-year-old man, is diagnosed with bipolar disorder and epilepsy.

The similarities between these two people’s symptoms and those seen in the transgenic mice bolster the idea that SHANK3 duplication leads to hyperactivity and seizures, the researchers say.