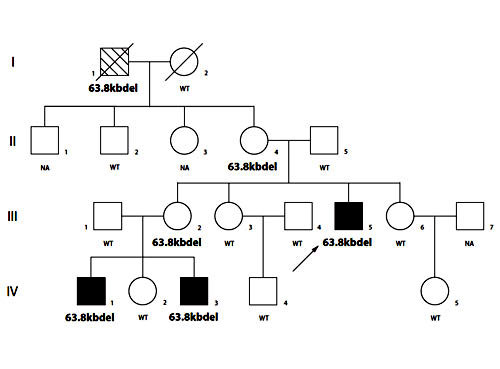 Click to enlarge image Joint inheritance: An individual with autism who has a SHANK1 mutation (arrow) shares the mutation with both affected (black and hashed) and unaffected family members.

Researchers have identified deletions in SHANK1 — the third member of a gene family that is closely linked to autism — in five men with the disorder, they reported 4 May in the American Journal of Human Genetics. This is the first study linking SHANK1 mutations to people with autism1.

Several studies have found mutations in individuals with autism in SHANK3 and SHANK2, which code for proteins that organize the connections between neurons. Mice with mutations in SHANK3 show behaviors reminiscent of autism, such as low social interest and repetitive self-grooming. SHANK2 mutant mice also show social impairments and hyperactivity.

Mice with mutations in SHANK1 have motor deficits and are more anxious than controls, but do not appear to have social deficits. However, they are less likely to communicate with other mice using ultrasonic vocalizations, sounds that are inaudible to the human ear.

In the new study, researchers looked for copy number variations — duplications or deletions of regions of DNA — in 1,614 individuals with autism and 15,127 controls. They found deletions in SHANK1 in two men with autism, but none of the controls.

One of these men inherited the deletion: Three of his male relatives also have the deletion, and have a diagnosis of high-functioning autism or autism-like symptoms, dubbed the broad autism phenotype. By contrast, two female relatives who have the deletion do not have symptoms of the disorder. The results support the theory that protective factors raise the threshold for autism risk in women compared with men, the researchers say.

Mutations in SHANK1 may increase autism risk, but less so than SHANK2 and SHANK3, which are strongly linked to the disorder, the researchers say. This is consistent with SHANK1’s role at neuronal junctions, which is to support connections formed by the other SHANK proteins.