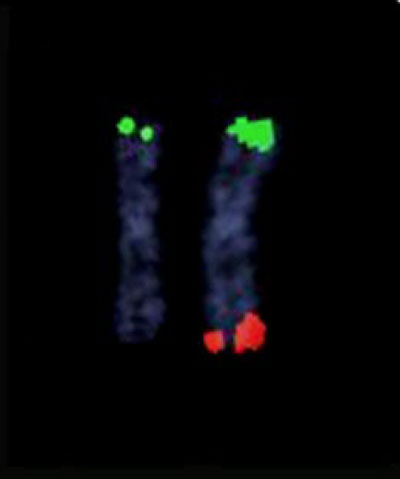 Crucial site: A deletion of a region on chromosome 3 (red dots) is linked to schizophrenia, autism and intellectual disability.

A boy with a rare deletion in chromosome 3 was diagnosed with autism and psychotic symptoms by age 5, according to a case report published 26 February in the American Journal of Medical Genetics Part A1. He is the second identified individual with this deletion who has these symptoms, which are exceedingly rare in combination.

Studies in the past few years have shown that deletions or duplications of chromosomal regions, called copy number variations (CNVs), are more common in individuals with neuropsychiatric disorders than in controls. One of these, a deletion in the 3q29 region, has been linked to schizophrenia, autism and intellectual disability.

Researchers found one boy with a deletion in 3q29 among 1,174 people with autism included in the Simons Simplex Collection (SSC), a database of families that have one child with autism2. The SSC is funded by the Simons Foundation, SFARI.org’s parent organization.

The new study characterizes this boy’s symptoms in detail. As an infant he had motor difficulties and at 2 years of age he had compulsive behaviors and repetitive movements. He was diagnosed with autism at 4 years of age.

By the time he was 5, the boy had severe psychotic symptoms, which included hearing a clock ticking inside his head and seeing the wall moving, among other visual hallucinations. These were so severe that he was unable to leave the house. His motor difficulties also progressed to the point that he suffered several severe fractures. The boy’s parents have no known diagnoses, but his maternal aunt has bipolar disorder.

Symptoms of schizophrenia in childhood are extremely rare and are usually diagnosed as childhood-onset schizophrenia. Of 126 children with this diagnosis, 15 have CNVs in autism– and schizophrenia-linked regions, including 22q11.2, according to unpublished results presented in January at the Salk Institute, Fondation IPSEN and Nature Symposium 2013.