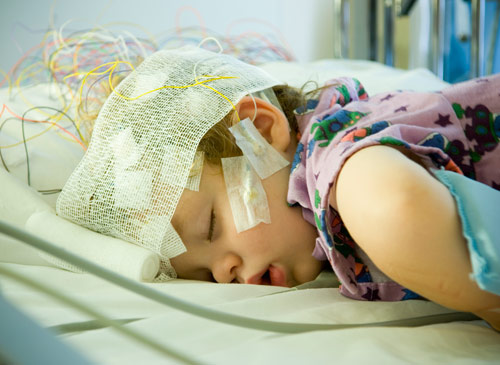 Restless night: Children with either of two rare forms of epilepsy have abnormal brain rhythms when asleep.

Individuals with either of two rare forms of epilepsy have duplications or deletions that encompass genes implicated in autism and language impairment, according to a study published 27 June in Epilepsia1.

Up to half of people with autism have epilepsy. Conversely, 15 percent of people with epilepsy have some symptoms of autism. The genetic and molecular processes underlying this connection are unknown, however. One theory is that both disorders are caused by an imbalance between signals that activate brain activity and those that inhibit it.

In the new study, researchers looked at 41 individuals with CSWSS, or continuous spike and waves during slow-wave sleep syndrome, and 20 with the related Landau-Kleffner syndrome (LKS). Both are rare forms of epilepsy characterized by occasional seizures and abnormal electroencephalography readings during deep sleep.

Individuals with either disorder also have some symptoms of autism. Children with CSWSS lose overall cognitive ability between 4 and 8 years of age. Those with LKS lose language skills around 4 to 5 years of age.

Of the 61 participants with either disorder, 46 have at least one rare duplication or deletion of a chromosomal region, or copy number variant (CNV). The researchers found 44 CNVs that overlap with all or a part of some well-characterized genes; 5 of these CNVs are spontaneous, or de novo, and the rest are inherited.

The CNVs also encompass genes involved in organizing synapses, the connections between neurons. Genes in this category, including CNTNAP2 and CTNNA3, have been linked to autism.